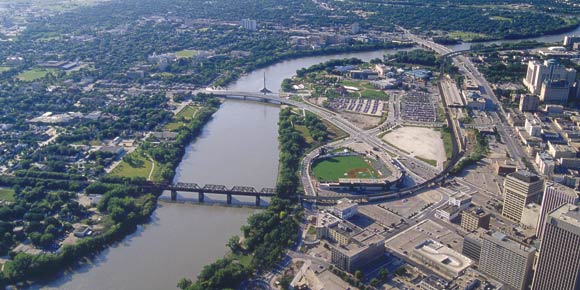 Back in 2016, when WinnipegREALTORS® first got involved in the process to consider what the City of Winnipeg now calls impact fees (which have also been referred to as growth taxes),  the city was tone-deaf when considering the impact of their actions on future growth and development in the city. This was not only with respect to residential development, where impact fees are now fully in effect on new, emerging communities within the city, but on other types of new development as part of a phased-in approach over three years beginning when impact fees were first introduced on November 1, 2016.

The exclusionary process used by the City of Winnipeg was in stark contrast to far more consultative approaches taken with industry stakeholders in Calgary, and more recently, in the City of Brandon.

For the record, WinnipegREALTORS® always felt that impact fees would either force new homebuyers to consider moving outside the city to find more affordable options, or it would cause them to simply decide to stay put and forego building a new home, thereby not freeing up older housing stock for sale since the majority of new homebuyers are existing homeowners with equity to spend. This was borne out last year in a preliminary review of building permits of over $50,000. They spiked by 25%.

Where impact fees may become even more critical going forward is with respect to their next target — new commercial development. The scheduled implementation date is November 1, 2018, only a week after the October 24 civic election. WinnipegREALTORS® has learned that this working group is also not ready to make any recommendations as to what fee should be placed on commercial property development that includes retail, office and industrial.

Here is what past commercial division chair Stephen Sherlock had to say in 2016, when the implementation of commercial development impact fees was first suggested: “In new suburban development, the standard practice is that the developer pays the upfront costs for the entire infrastructure required for said development. They pay for the roads, the street lights, the sewer and water, etc. and the newly constructed building(s) generate property tax for the area and the ongoing maintenance of these items.  If the city imposes a new extremely large lien item on a developer’s spreadsheet, in my opinion, this will take the development of Winnipeg from its current pace to a standstill. We need to promote growth in this city, not stagnation.”

Fast forward to 2018, when current commercial division chair Trevor Clay weighed in with his mid-year commercial market report. Even without impact fees on new commercial development, Clay said,” As a result of the City being unable to make sufficient amounts of service and zoned industrial land available for development, we are seeing rapid growth in the rural municipalities surrounding Winnipeg. Efficient approval processes and lower land costs in the Winnipeg Metropolitan Region are providing access to opportunities that simply do not exist here in the city.”

It is certainly the expectation of WinnipegREALTORS® — and its commercial division members in particular — that the City of Winnipeg would consult with them before going ahead and imposing impact fees on new industrial development. The unintended negative consequences of an impact fee on any new commercial development in the city must be considered.

When Trevor Clay was asked recently about what question he would pose to the mayoral candidates in the upcoming mayoral forum, he picked up on what he said in the commercial market update: “What are we doing to stem the tide of missed opportunity, as we are already seeing a new 100-acre industrial park in the RM of Rosser and a lot else commercially-speaking being developed outside the City of Winnipeg? This translates to a lost commercial tax base for many years to come.”

This brings me to the subject of how we should be planning for growth when more of it is migrating outside the city. It is obvious market realities are dictating capital, and investment will move where it is more cost effective and easier to develop. These factors alone must be considered in any new discussion about moving further down the impact fee road. We need evidence-based strategy combined with sound data to plan for future growth.

In May, at a “Plan for Growth” forum hosted by the Urban Development Institute (UDI), it became clear that better cooperation and coordination between City of Winnipeg officials and the professional development industry is a prerequisite to plan effectively and wisely for Winnipeg’s future growth.

Eric Vogan, president of the UDI Manitoba Chapter,  put it this way: “Understanding the capacity and constraints of Winnipeg’s greenfield areas help us to understand how much of the growth that is expected can be accommodated in new neighbourhoods. It also offers insight into the level of growth and planning that Winnipeg will require in corridors and downtown, as well as in established areas of the City.”

WinnipegREALTORS® is fully embracing the need for more aggressive infill development as part of a go-forward strategy for the City of Winnipeg, in order to accommodate future population increases, but we also recognize that greenfield development will continue to be essential to meeting the expected number of housing units required.  Both need to be reflected and well outlined and detailed in the updated OurWinnipeg long-term development plan.

Vogan added, “To understand where growth should go, what infrastructure is required, and when it will be available to accommodate expected growth in Winnipeg, detailed plans need to be made.”

Plan to attend the mayoral forum being held by WinnipegREALTORS® and the Winnipeg Free Press  on October 4 at the Franco-Manitoban Cultural Centre. Ask your candidates running for mayor, and city council, what their position is on impact fees and how they intend to see the City of Winnipeg accommodate future growth in a way that makes our city more attractive to invest, work, live and raise a family.