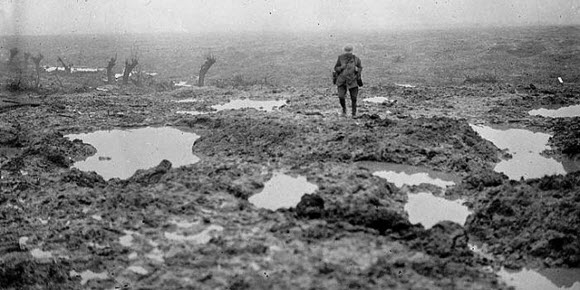 Expeditionary Force headquarters on October 3. An order from Haig informed the Canadian commander that the CEF was expected to take over where others had failed and capture Passchendaele, the monumental battle that was marked during Veterans’ Week, observed between November 5 and 11.

“As we mark Veterans’ Week and mark the 100th anniversary of the Battle of Passchendaele,” said federal Veterans Affairs Minister Seamus O’Regan, “it is time to remember those who gave us so much.”

A delegation of government officials and five school children, including Kiera Wortley from Manitoba, went to Belgium to pay tribute to the fallen.

Currie, a real estate agent from British Columbia, told Haig that taking Passchendaele — a position Currie believed that had by then no real military value — would probably cost the Canadians 16,000 casualties.  “Passchendaele is not worth one drop of blood,” Currie confided in his diary.

Haig did listen to the “big, flabby, real-estate promoter” who turned into a “great field commander” (Desmond

Morton and J.L. Granatstein in Marching to Armageddon: Canadians and the Great War 1914-1919), because he needed the Canadian troops to extricate him from what had turned into an unmitigated disaster. Since the offensive was launched three months earlier, the Third Battle of Ypres had already accounted for tens of thousands of British, New Zealand and Australian casualties without any appreciable territorial gains.

Philip Gibbs, an official correspondent with the British Army as well as for numerous newspapers, witnessed all phases of the assault on the ridge, and wrote that the “real terrors” of the battlefield were the nights of “darkness and rain and quagmires ... every shell hole was brimful of brown or greenish water.” He said men slipped on the slime on duckboards (wooden planks), falling helplessly into the shell holes.

Haig originally visualized the battle as the war’s first major breakthrough with the eventual objective being the Belgian seacoast and the capture of German submarine pens. In the summer and fall of 1917, German U-boats were ravaging Allied merchant shipping in the North

The Germans were well aware that an attack was planned to capture the high ground of the sickle-shaped Passchendaele ridge. To counter the attack, the Germans had prepared strong defensive positions, featuring 11⁄2-metre thick concrete pillboxes to protect troops during bombardments. The German defenders would only re-emerge after the barrage stopped to mow down attackers using heavy machine-gun fire and artillery.

Currie reluctantly accepted Haig’s order, but also managed to wrangle some conditions from the British general. For one, the Canadians would not attack until they were adequately prepared and weather conditions had improved.

General Sir David Watson, who led the Canadian 4th Division during the battle, said it was “no surprise that the Canadians by this time had the reputation of being the best (Allied) shock troops ... They had been pitted against the select guards and shock troops of Germany and the Canadian superiority was proven beyond question.”

Despite the strength of the Canadian contingent, nothing could have prepared the troops for what they saw at Passchendaele. Watson wrote that “the front, and on beyond, were simply beyond description. Wastes of mud, destroyed houses, roads torn up by constant shelling and above all, the vile weather conditions, that made life a burden.”

The weather had conspired against the attack in the Ypres salient from the onset of the battle months earlier. The worst rainfall in 30 years fell. “Rain and Mud” became known disparagingly as the allies of the German army. Compounding the effects of the heavy rain was the artillery barrage. Only the previously well-tended drainage system kept the land from flooding. Exploding shells blew away the banks of streams which then overflowed forming wide bogs.

Currie promised his men that they would not “be called upon to advance until everything has been done that can be done to clear the way for you. After that it is up to you.” Currie’s preparations involved the replacement of artillery earlier lost to enemy counter-artillery fire. Currie’s philosophy was that it was better to “pay the price of victory in shells — not lives.”

On October 26, 20,000 Canadians moved across the mud of No Man’s Land toward the German defenders to begin the process of capturing Bellevue Spur, Crest Farm and finally the village of Passchendaele. In the first three days of fighting, the Canadians suffered over 2,500 casualties to advance just one kilometre. The second phase of the attack was launched on the 30th and also gained just a kilometre. In the second phase of the attack, the casualties for a single day were 2,300. On November 6, the 1st and 2nd Divisions initiated the last phase of Currie’s plan and captured the village of Passchendaele. But another phase in the attack had to be added to compensate for British and Australian troops on the Canadian flanks failing to keep pace, allowing a salient to form that jutted out into enemy lines. To protect the flanks, Currie ordered his men to capture the dangerous high ground over the Canadian position.

Gibbs said it was “small parties of grim, resolute fellows” who finally overcame the blockhouses “to get a footing on the higher slopes, scrambling and stumbling and falling with the deadly swish of bullets about them ...”

On November 10, the high ground at Passchendaele was captured, and British Field Marshall Sir Douglas Haig finally felt he could call the operation a success and end the Third Battle of Ypres.

Canon Frederick George Scott, the senior chaplain of the 1st Canadian Division, describing the battlefield, Canon Scott said, “The huge shell holes were half full of water often reddened with human blood and many of the wounded had rolled down into the pools and been drowned.

The Canadian accomplishment cannot be understated — they had succeeded when so many others had failed, although at a terrible cost. Securing Passchendaele resulted in 15,654 Canadian dead and wounded, almost exactly what Currie had predicted. Another blow to the Canadians was that a few months later the positon was abandoned by the British.

The reality was that capturing Passchendaele was not a factor in ending the war as Haig originally promised, but Canadians troops would lead the way when a final breakthrough was finally realized a year later.