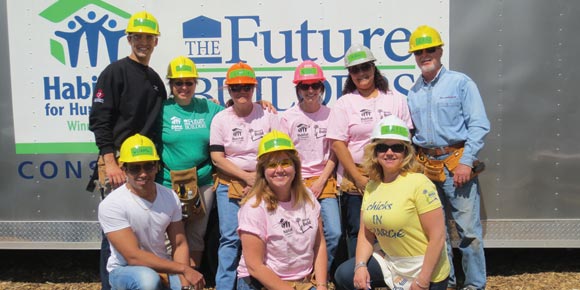 If you could spend one dollar today to save four dollars over the next few years, would you do it? That is exactly what occurs when people invest in the Habitat for Humanity (Habitat) program to build houses for sale to low-income working families.

A recent study completed for Habitat in Canada by the Boston Consulting Group (BCG), a global consultancy, found that every Habitat family purchasing a home in Canada in 2015 will save taxpayers $175,000 in future social service costs. That means that more than $4 million in future social costs have been avoided in Manitoba with the families that purchased their homes last year and more than $40 million across the country.

How are those savings generated?

•          Within a very short time after moving into their home, the children in the family saw a marked improvement in school performance.

•          The Habitat children were far more likely to complete high school and some level of post-secondary education.

•         The families were healthier, recording fewer visits to the doctor or hospital and fewer days missed from school and work.

•          Family members increased their participation in school and community programs.

•          The family was far less likely to require food banks or social assistance.

BCG took the qualitative findings from the CMHC study and conducted an exhaustive two-year analysis during which they reviewed Habitat records, interviewed homeowners, followed the progression of Habitat children as they matured and compared those results to families in similar economic strata.

They were able to develop an economic formula that determines the value to society resulting directly from the financial and cultural stability that comes with homeownership.

These national studies mirror our experience in Winnipeg and across Manitoba. Since inception, Habitat has built and sold more than 350 homes in Manitoba, with the vast majority of those in Winnipeg.

We have consistently seen that families purchasing their home from Habitat tend to sink their roots into the neighbourhood and become engaged in school and community programs. A significant number of the Habitat children have graduated from, or are attending, apprenticeship, college and university programs. Many have launched professional careers.

Our program consistently elevates families from poverty to the middle class.

So, if you could spend one dollar today to save four dollars over the next few years, would you do it?

Habitat for Humanity Winnipeg (now known as Habitat for Humanity Manitoba) was incorporated in 1987 and owes its start to the 1985 Mennonite Economic Development Associates’ annual convention in Cedar Rapids, Iowa. It was at the convention that Winnipeg’s Al Doerksen took inspiration from Millard Fuller’s keynote speech that chronicled his journey of providing housing to those in need.

Doerksen was so moved by Fuller’s exuberant vision to build houses for those less fortunate that upon returning home, shared his enthusiasm with friend Paul Hiebert and urged him to sign up for Habitat's next Blitz Build in Chicago. The two friends also recruited Jake Pauls and Hugo Jantz and together they served at the 1986 Jimmy Carter Chicago Work Project.

Caught up in the movement, they returned to Winnipeg the following year and started the first large-city Habitat affiliate in Canada to help eliminate poverty housing. The first Habitat Winnipeg office was located in a church basement on Church Street.

In 1988, Winnipeg Habitat conducted its first building blitz in July and in just one week more than 150 volunteers united to build two homes on government-donated side-by-side lots in the North End. July 29 was the day Louis and Corrine and their three children had their dream come true when they took possession of their custom-built home on Flora Avenue.

(Sandy Hopkins is the chief executive officer for Habitat for Humanity Manitoba.)