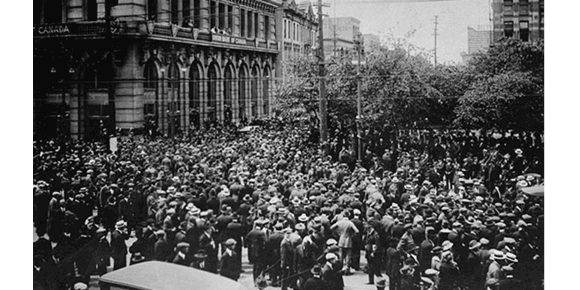 Rebranded museum and the general strike

I have visited the Canadian Museum of Civilization in Gatineau, Quebec, and found it quite a fascinating journey through the history of our nation — a history that was not limited to emphasizing the usual military and political achievements of a nation, but also an examination of social and everyday issues that shaped Canada. Among the exhibits was the recreation of a room of the St. James Street Labor Temple (demolished in the 1960s), where labour and strike leaders met before and during the Winnipeg General Strike of 1919. The streetscape of Winnipeg of the period also included a Chinese hand laundry, Ukrainian church and a music supply store.

But with the dismantling of Canada Hall exhibits and renaming of the museum to the Canadian Museum of History, the labour temple and an exhibition dedicated to the general strike — the most famous outbreak of labour unrest in Canada — is no more. What will replace it has yet to be determined. But it’s unlikely that it will not fully reflect the importance of the general strike to the labour movement in Canada.

“Changes can be made to the module with few political or institutional risks,” reads a August 22, 2014, document for assessing the risk of the dismantling the exhibition which was obtained by the Toronto Star.

“Some comments by academics cite the closure as evidence of museum’s lack of working class history ... The removal represents minimal risk to the museum, though it will entail communications challenges to the academic community.”

The new Canadian History Hall — sans the former display — is scheduled to open on July 1, 2017, when Canada marks its 150th birthday as a nation.

It’s not just academics who are skeptical that the changes to the museum’s  displays will not contain a strong labour component, but union leaders and Winnipeg NDP MP Pat Martin. It was Martin who supplied the photo used to recreate the labour temple.

Expressions of concern are quite understandable under the present Conservative government of Prime Minister Stephen Harper. The $50,000 in funding to celebrate the 50th anniversary of the Canadian flag, which was the brainchild of former Liberal Prime Minister Lester Pearson, was “embarrassing.” The Conservative government paid more attention and gave millions of dollars toward celebrating Sir John A. Macdonald’s 200th birthday and the 200th anniversary of the War of 1812, as well as more millions to commemorate Canada’s military history.  Any celebrations arising from acts by past Liberal governments, such as the anniversary of the Charter of Rights and Freedoms, have been ignored as inconsequential. One can only imagine what today’s government makes of a general strike that helped spawn the political labour movement that eventually led to the formation of the NDP.

When the general strike broke out on May 15, 1919, at 11 a.m., the Canadian government and Winnipeg’s civic and business leaders feared it was the first stage of a Bolshevik-style revolution. On that day, 35,000 workers left their jobs.

Throughout the course of the strike, it was instructions from Ottawa that intensified the animosity between labour and the authorities. The Prime Minister Robert Borden government even sent secret police to Winnipeg to penetrate the ranks of the strikers. Portage la Prairie MP Arthur Meighen, the federal minister of justice, was particularly active in investigating the strikes, looking for the presence of Bolshevik revolutionaries and “foreigners” inciting the strikers. The Winnipeg business elite organized the Citizens Committee of 1,000 to fight “Reds” allegedly  lurking in every corner and to defeat the strikers.

In reality, the strike was not a Bolshevik revolution, but an open “revolt” against poor working conditions, the need for a “living wage,” as well as a call to uphold the collective bargaining rights of workers. At the time, the city’s business elite believed they had the right to exploit workers to their own advantage,

Labour leaders in Winnipeg adopted the traditions and democratic leanings of the British labour movement — most of the strike’s leaders were originally from Britain and the so-called “foreign” element of the strike was a non-existent entity. The strike leaders did not see themselves as either Marxists or Bolsheviks.

The strike can be said to have been fought along deep social, economic and political divisions that evolved in the city. Even the veterans of the First World War were divided, with the returning privates and sargeants supporting the strikers, while the former officers supported the Citizens Committee and the status quo.

“Class division had long split the community and the general strike was only the latest and most serious manifestation of a lack of unity of economic or political purpose among the city’s residents,” wrote historian Alan Artibise in his book, Winnipeg: An illustrated History.

As a crowd gathered in Market Square near city hall, Mayor Charles Gray was panicked by “inflammatory speeches,” which he believed were meant to incite a riot and therefore called upon the Royal North West Mounted Police (today’s RCMP) to patrol the streets. This was the first act in what would become “Bloody Saturday,” June 21. The Mounted Police charged three times into the crowd gathered at the corner of Portage and Main — on the last occasion wielding clubs and revolvers.  As they turned on a gathering at William Street, they opened fire. Mile Sokolowski, an innocent bystander, was shot and killed during the melee. Steve Schzerbanowicz received a gunshot wound and died two days later of gangrene. Over a hundred more people were injured. About 200 people were trapped by “special police” (actually privately-hired strikebreakers) in the alley between Market and James streets. Batons and guns were used by the “specials” to subdue those gathered. In a few minutes, 27 people were injured.

The strike continued for a few more days, but the city became an armed camp with the purpose of once and fall suppressing the strike. “Faced with the reality of brutal, naked force, the Strike Committee admitted defeat and called off the strike at 11 a.m. on June 6.”

Justice H. A. Robson wrote in thge Royal Commission report  into the strike  that “if Capital does not provide enough to assure Labour a contented existence ... then the Government might find it necessary to step in and let the state do these things at the expense of Capital.”

According to the commissioner, “the specific and immediate cause of the general strike was the refusal of the employers in the iron contract shops to recognize the demands of their workers for agreement by those workers in the method of collective bargaining indicated by the Metal Trades Council on behalf of those employees ... Labor considered that the refusal of the demand of collective bargaining ... was a blow struck at labor organization. The general strike was an attempt by direct action to secure the demand of labor.”

Whatever the causes and effects of the strike, it was a milestone event in the history of Winnipeg and Canada and deserves emphasis in an exhibition at the  rebranded Canadian History Hall.