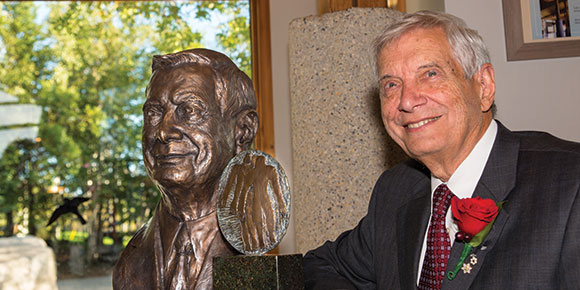 Dr. Allan Ronald, a pioneering researcher, is this year’s inductee into hall of fame

A Manitoba microbiologist, who in 1980 created one of the first clinical units exploring sexually transmitted HIV/AIDS in Africa, has been inducted into the WinnipegREALTORS® Citizens Hall of Fame.

Dr. Allan Ronald is the 42nd inductee and received a bronze medallion signifying his induction during a special ceremony held at Fort Whyte Alive on September 9 (see photo above). The hall of fame honours Winnipeggers who made a significant contribution to their community, whether at the local, national or international level.

“His crowning achievement is the collaborative effort he initiated with his Kenyan colleagues in the joint University of Manitoba/University of Nairobi program that has put Manitoba and Canada in the forefront of HIV/AIDS research globally,” said Dr. Henry Friesen, who from 1973 to 1992 was a professor and head of the department of physiology and professor of medicine at the University of Manitoba, and was inducted into the WinnipegREALTORS® Citizens Hall of fame in 2006.

According to a University of Winnipeg citation for an honourary doctorate, the program he created has resulted in “groundbreaking findings solving some of the major mysteries surrounding the transmission and spread of AIDS. It has been called the most important research site in the developing world for HIV/AIDS with 700 abstracts or publications arising from it. It has been pivotal in understanding the disease in Africa and

resulted in important programs to help prevent the spread of the HIV/AIDS.”

After retiring from the U of M, Dr. Ronald set up a complete HIV/AIDS care and prevention program in Uganda.

Dr. Ronald trained over 75 physicians in the infectious disease unit at the University of Manitoba’s Faculty of Medicine, including Dr. Frank Plummer, who is a former director of Winnipeg’s National Microbiology Laboratory (NML).

During the ceremony, Dr. Ronald commended the people he trained for their contributions in the field of infectious diseases, while expressing appreciation to WinnipegREALTORS® for his induction into the hall of fame.

Rick Preston, the chair of the

WinnipegREALTORS® Citizens Hall of Fame, said the Portage la Prairie born physician played a leadership role in paving the way for the selection of Winnipeg as the site of the

The NML is already gaining international recognition for Winnipeg as a result of its key undertaking in identifying the SARS virus and development of an Ebola vaccine long before the recent outbreak in West Africa.

Dr. Naranjan S. Dhalla, who was a 2000 inductee into the hall of fame and is a renowned heart disease researcher, nominated Dr. Ronald for induction into the hall of fame, stressing his contribution to laying the foundation for the establishment of the infectious disease laboratory in Winnipeg.

“One real delightful development which must give Dr. Ronald so much satisfaction is the recent success Winnipeg’s National Microbiology Laboratory has had with its work on the Ebola vaccine,” said Preston.

“Long after his retirement, should that ever really occur, the programs and systems that he has pioneered will remain as models for what can be achieved in a complex and challenging environment,” said colleague Dr. Stephen Moses, when Dr. Ronald was inducted into the Canadian Medical Hall of Fame.

“To no one’s surprise,” said Preston, “Dr. Ronald will always be ‘on call’ for his expertise and leadership in infectious disease research.”

The hall of fame was created in 1987 by WinnipegREALTORS® and honours outstanding Winnipeggers in various categories, including professional, business, public affairs, community service, volunteerism and the arts. Some of the 42 inductees are former mayor Stephen Juba, activist Nellie McClung, and Marathon of Hope runner Terry Fox.

A bronze portraiture of Dr. Ronald by local sculptor Madeleine Vrignon was installed at the hall of fame site in the Formal Garden at Assiniboine Park.