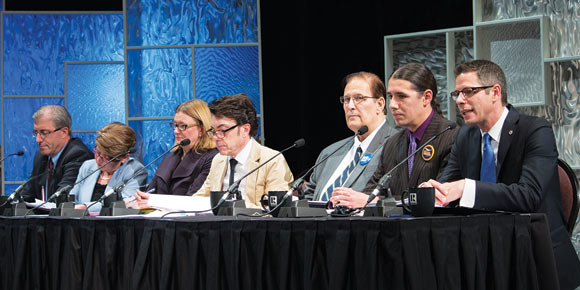 When the dust settled after the nomination period ended on September 18, eight mayoral candidates were left standing. Each had met the minimum requirement of submitting a list of 250 registered voters in support of their candidacy. As a result, they will all be on the ballot when Winnipeggers vote for their next mayor on October 24. In alphabetical order, the candidates are: Ed Ackerman, Brian Bowman, Tim Diack, Umar Hayat, Venkat Machiraju, Jenny Motkaluk, Doug Wilson and Don Woodstock.

Since 1992, when the first mayoral forum was held at the Burton Cummings Theatre with a whopping 17
candidates, WinnipegREALTORS® has held a number of successful forums and is again holding one this year. While technology has evolved, and different issues have emerged over the years, the need to be informed about the candidates who are vying for mayor has not changed. Winnipeggers want to make the right choice for their next mayor in order to make Winnipeg the best city it can be, and being informed on all the issues is one way to ensure that happens.

To this end, WinnipegREALTORS® has kickstarted your ability to get to know the candidates better before the forum and election by producing introductory videos on each of them. Simply put, we gave each candidate an opportunity to introduce themselves and explain why they are running to be your mayor. And WinnipegREALTORS® is pleased that every candidate came down to our office to participate. To watch the mayoral candidate videos, and register to attend the free forum, go to http://bit.ly/WRAMayoralforum2018 or call 204-789-2643.

WinnipegREALTORS® is proud to be teaming up with the Winnipeg Free Press and AVentPro to host and produce Mayoral Forum 2018. The event is being held on Thursday, October 4 from 7 to 9 p.m. at the
Franco-Manitoban Cultural Centre on 340 Provencher Blvd. Doors open at 6 p.m. Winnipeg Free Press
“Perspectives” Editor Brad Oswald will be moderating.

Issues important to all Winnipeggers will be raised and discussed through a line of questioning directed by our moderator including ones submitted by Winnipeggers tuning in live via Twitter.

REALTORS® want to know what the plan is to grow our city in a sustainable and fiscally responsible way, and how our mayor and city councillors will respect homeowners’ biggest investment by finding better and more cost effective ways to manage our city. For example, how will they seek opportunities to attract new investment and increase our tax base in order to continue delivering the essential city services that Winnipeggers expect and rely on?

These are front and center concerns for Realtors, who as fellow taxpayers and citizens, believe that Winnipeggers are just as invested as they are in wanting to see the best outcomes for their city.

Some issues WinnipegREALTORS® will endeavour to cover in the two-hour forum — if time permits — include questions about property taxes, fiscal responsibility, impact fees, homeownership opportunity, infrastructure (e.g. extension of Chief Peguis Trail), expediting building and occupancy permits, residential infill development and their approach on how they will plan for and facilitate growth for both new residential and commercial development in the city.

One real opportunity for growth that Winnipeg
REALTORS® has identified — by observing what is happening across the country in other major housing markets — is in how more affordable Winnipeg is compared to cities like Toronto, Vancouver, and even Calgary. How do we make Winnipeg a city where millennials in particular would consider relocating to in light of their limited chances, if at all, to purchase and own a home where they grew up? We also need to make our value proposition here more attractive and compelling to keep our own millennials from moving away as they, too, will be unable to own a home in some very unaffordable housing markets across the country.

Iain Coates, Winnipeg Free Press’ Marketing Director, had this to say about the upcoming mayoral forum: “We are very excited to present this mayoral forum with AVentPro and WinnipegREALTORS®. This is an important election for all of us in Winnipeg, which is why we have dedicated so much time and energy into providing the information that Winnipeggers need to help inform their decision on October 24. I think this event provides people with an excellent opportunity to learn more about their candidates before they reach the voting booth, so we are happy to help any way we can.”

While WinnipegREALTORS® is focused on putting on an informative mayoral forum for Winnipeggers, there are also 52 candidates running to represent 15 wards within the city of Winnipeg as city councillor.

A number of long-time incumbents, such as city councillors’ Jenny Gerbasi, Russ Wyatt and Mike Pagtakhan, are not returning, so the race is wide open in these wards. One-term city councillor Marty Morantz is also not running, so there will be at least four new faces on city council after October 24.

The redrawing of some ward boundaries for this election has resulted in the elimination of the St. Charles ward and the creation of a new one called Waverley West. Congratulations goes out to Janice Lukes, as she has been acclaimed and will represent this ward over the next four years. The St. Charles ward city councillor, Shawn Dobson, is running in the newly created St. James ward against incumbent city councillor Scott Gillingham.

All other wards have at least two candidates running for the city councillor position.

WinnipegREALTORS® looks forward to seeing you at the all-candidates’ mayoral forum on October 4.  This is a great way to ensure that you are well informed about each of the candidates before exercising your right to vote on October 24.