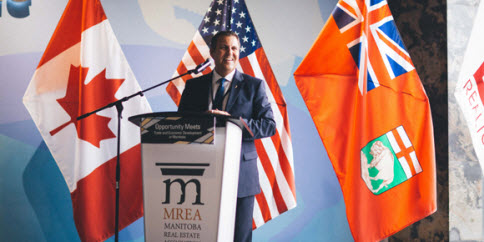 Call it a coup of major proportions.

Traditionally, the prestigious Certified International Property Specialist (CIPS) course is put on by the National Association of REALTORS® in Chicago, Illinois.

It was the the first time it’s been held outside the U.S.A.

And while 50 high-level real estate professionals from across the U.S. and Canada spent five intensive days absorbing course content at Red River College’s Roblin Centre along with counterparts from Manitoba, it was the after-hours activities that truly opened the eyes of course attendees to all the city and province offers from a business standpoint.

“I found the CIPS program highly beneficial. It broadened my ability to engage with greater understanding about European, Asian and other markets in the Americas, as well as leading cities around the world,” said WinnipegREALTORS® CEO Marina James. “It was a great week.”

Events such as a marquee reception at Assiniboine Park Zoo’s Journey to Churchill Exhibit, a guided tour of the Canadian Museum of Human Rights and a dinner at St. Charles Country Club (hosted by the MREA), as well as lunch and learn events and time spent networking with Realtor colleagues, shone a light on the city and province.

By the week’s end, the eyes of out-of-province attendees had been opened in a big way.

David Salvatore, CEO of the MREA, said the week was a success on two fronts: educationally, and gaining exposure for the city and province.

“Not only did the course cover the entire world and provide great educational tools, but it provided us with the opportunity to showcase trade and economic development opportunities with Realtors at executive and CEO-levels from the United States and Canada (Arizona, California, Florida, Illinois, Minnesota, Missouri, New York, Texas, Virginia, British Columbia, Alberta, Saskatchewan, Ontario, New Brunswick, Prince Edward Island),” he said.

“We believe our Realtor network can play a central role in helping drive business opportunities to Manitoba.”

He added when that happens, everyone in Manitoba benefits.

“Amplifying on existing two-way trade relationships and creating new ones will strengthen the real estate market, create jobs and provide resources that can be invested back into communities. I believe the result of our efforts was the start of more opportunities to promote the advantages we have to offer in our province.”

Noah Ruggieri, an Illinois-based commercial Realtor, said that he enjoyed taking the CIPS course in Winnipeg.

“It was my first real Canadian experience,” he said. “When I flew in, I saw CentrePort, and was impressed by the plan and scope of Winnipeg’s intention to become a transportation hub. I also spoke with the Honourable Cliff Cullen, and he told me Manitoba does more business with Illinois than it does with China.

“I was excited to build some great business relationships, and want to continue to develop ties with the city and province.”

“Manitoba has a vibrant and diversified economy with competitive costs for doing business, including an affordable real estate market for both home and commercial development,” he said.

“By building stronger partnerships with communities and industry partners, together we can create new opportunities and a brighter future for all Manitobans.”

Realtors from across the province will continue to do their part to help build that bright future.