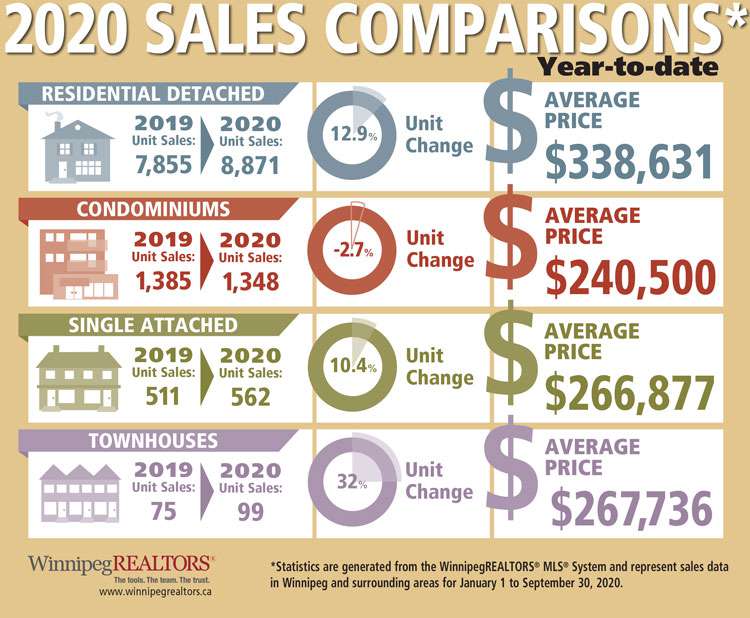 September MLS® sales reached an all-time high of 1,777 for this month compared to 1,211 in 2019,
indicating that the resurgence of sales since June continues throughout the third quarter.

“We are witnessing unprecedented times and certainly our third quarter sales activity of over 5,500 sales is unrivalled from any previous quarter in WinnipegREALTORS® history,” said Catherine Schellenberg, president of WinnipegREALTORS®. “For comparison sake, last year’s third quarter performed exceptionally well and there were fewer than 4,100 sales.”

Sales dollar volume in September of over half a billion dollars rose 57% compared to September 2019. The higher percentage increase in dollar volume compared to the 47% gain in sales is an indicator of upward pressure on prices. This is due to the accelerated sales activity and the rapid depletion of listings.

“As much as we have witnessed a shortage of listings, this can be attributed to the strong pace and growth in demand for property the last four months,” said Schellenberg. “Similar to a store owner, we have not been able to stock the shelves fast enough to keep up with a spike in demand in a number of sought-after neigbourhoods and municipalities within our market region.”

Some rural municipalities that were seeing higher conversions of their inventory were the City of Selkirk and the RMs of Ritchot, Rockwood, Woodlands and West St. Paul.

In the last few months condo market sales have been strong. Condo sales in September helped reduce the sizable deficit built up earlier in the year compared to the same period last year to less than 3% at the end of this month.

“We are seeing first-time home buyers having to go above $300,000 in their offer to acquire a home they may have been able to purchase under this benchmark level last year,” said Schellenberg.

Other MLS® property types exceeded market expectations in September with vacant lots up 179%, townhouses increasing 150%, mobile homes ahead by 86% and single-attached rising 58%.

“REALTORS® know the market and it is in your best interest to work with one to become familiar with the ebb and flow of listings, sales and pricing,” said Marina R. James, CEO of WinnipegREALTORS®.