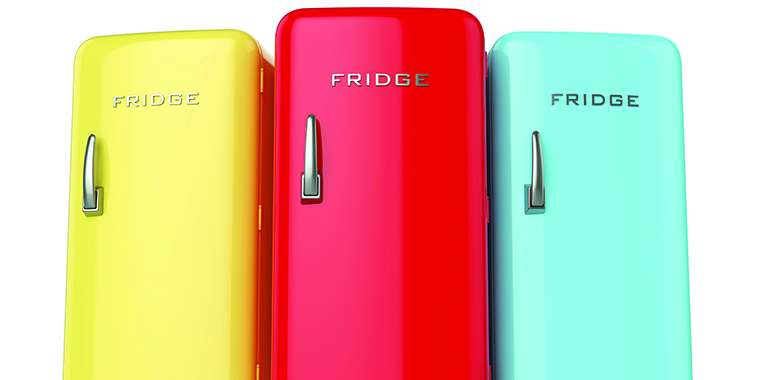 Let’s put some colour back in the kitchen

Growing up, I watched every episode of “Grace Under Fire.” The show’s heroine, Grace Kelly, had a small robin’s-egg blue refrigerator in her kitchen. It was old and had a single door and rounded edges — I loved it. After every kitchen scene I thought, “I’m going to have a fridge just like that in my house.”

Later in the series, the refrigerator was painted white. Suddenly, the cheery blue appliance I’d been coveting for years looked just like any old fridge. I was devastated.

That trauma lasted well into adulthood. Grown-up me, clutching childhood dreams of colourful kitchens, just knew she’d be able to find a blue fridge, or maybe avocado green, or even a nice earthy yellow. Instead, I found a sea of metal.

I wanted something more playful, something that would match my personality and create a focal point in the kitchen. Where did all the colour go? To find out, I needed a history lesson.

Colourful appliances, as it turned out, first came on the scene in the 1950s.

“This was the era of colour TV, so when armed with this powerful new visual tool, designers and appliance manufacturers marketed everything with that in-colour angle,” says Diana Hathaway Timmons, about.com colour expert and design consultant.

“Decor ads back then went as far as to market their appliance colours to match your wardrobe or favorite shoes,” Timmons says. And it worked. From the multihued variations in the ’50s and ’60s, to the earthy tones in the ’70s, colour hung in.

That is, until the early ’80s, when colour started to fall out of fashion.

“This is when you saw less Harvest Gold and more almond and beige appliances,” says Timmons.

But those pale neutrals didn’t last long either. Soon consumers were leaning toward black and white appliances again. Stainless steel first showed up in the ’90s, according to Timmons, but it didn’t really take off until TV intervened, again, to change people’s tastes.

“Fueled by the popularity of the Food Network, cooking and entertaining at home in a commercial-style kitchen drove the stainless-steel appliance movement,” says Timmons.

Suddenly, everyone wanted sleek stainless steel. And home buyers started to expect it.

So had I really already lost the battle? Had manufacturers finally given up on unique style? Not entirely.

Manufacturers still make new colour creations for the don’t-want-to-overpay masses from time to time. Following in the footsteps of tech giants, some appliance companies have adopted “ice white.” Sometimes other metallic finishes such as shimmery gold and dark bronze show up, but they don’t have a big impact.

But what about the robin’s-egg blue, cherry, and avocado shades of my childhood dream home?

The Beach Blue looks almost identical to Grace’s old kitchen fridge — it gets my heart pounding.

But getting those unique colours will cost you.

GE is raising the base price of its Artistry line from $1,200 to $1,500 for the colour options, according to CNET. Big Chill comes with a shiver-inducing $2,995 price tag.

Paint: If you already have a boring stainless-steel fridge, there are painting contractors out there who will paint your refrigerator, Timmons says. It may not be the cheapest option, but you’ll save over the “custom” colours of the higher-end models.

Go magnetic: Magnets don’t stick to true stainless steel, but if you have a painted fridge, you can change the colour with magnetic fronts. These fronts are designed to cover the entire door, making a big change, according to Timmons.

Decals: Not ready for a drastic change? Sites such as Etsy offer vinyl decals in an endless variety of styles and colours. Sure, it isn’t a complete colour change, but you can choose patterns and designs as well.

As for me, I think I’ll turn on some “Grace Under Fire” reruns and dream of a more colourful time.