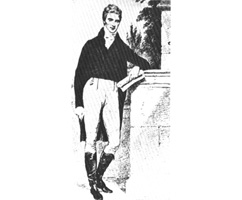 January 10, 1817 — Macdonell, who recaptured Fort Douglas, only served as the governor of the settlement for a few months afterward

Those arraigned in Canada with Lord Selkirk were charged with fewer offences than the Nor’Westers. The charges included grand larceny for seizing North West Company (NWC) goods at Fort William, malicious shooting, robbery for seizing NWC property at Fort Gibraltar, two counts of murder, and one of common assault.

Until his death on April 8, 1820, in Pau, France, Selkirk fought to be freed from the civil law suits initiated against him by NWC partners, taking his cause as far as the British Parliament. Selkirk’s problem in Canada, which was then made up of Upper Canada (today’s southern Ontario) and Lower Canada (today’s southern Quebec and Labrador) — the colonies were created by the British Parliament’s 1791 Constitutional Act — was that the courts were entirely dominated by the North West Company and their powerful friends, making it virtually impossible for him to receive justice.

The court proceedings were marked by instances of perjury and long postponements in sittings brought about by changes in venue from Upper to Lower Canada. It was said that his lengthy legal battles and mounting debts associated with his defence affected Selkirk’s health and ultimately contributed to his death. After his death, Lady Selkirk continued Selkirk’s legal battles in the hope of vindicating her husband’s good name.

Canadian commissioner William Bachelor Coltman concluded that the first shot during the Battle of Seven Oaks was fired by someone among the Hudson’s Bay Company (HBC) Governor Robert Semple’s party (also later admitted by blacksmith Michael Heden, who fled with Daniel McKay across the Red River in a canoe during the confusion of battle, while Michael Kilkenny and George Sutherland escaped by swimming across the river), and that the high rate of death inflicted by the Nor’Westers and Métis led by Cuthbert Grant was the result of the Semple group standing packed together, as well as being unfamiliar with frontier warfare and the use of firearms.

Furthermore, the men led by Grant were arranged in a semi-circle — a tactic used to impound buffalo — that allowed for a more effective firing line. As a result, only one man from Grant’s party was killed by their opponent’s gunfire.

It should also be noted that it was an unequal battle in terms of manpower, since Grant had 64 men under his command, while Semple’s force numbered just 25 men (four fled across the Red River when the battle began and survived,  Pritchard remained for the entire battle, was wounded, captured and survived, while John Bourke, who was sent by Semple back to Fort Douglas to bring up a cannon, didn’t arrive in time to participate in the skirmish, but was wounded during the retreat and also survived).

Later accounts of the Battle of Seven Oaks assigned it greater significance than it arguably warranted, although it undoubtedly served as a wake up call to the authorities on both sides of the Atlantic, which emphasized the necessity of bringing about wholesale changes on how commerce and government on the prairies was to be conducted.

When a ceremony was held at the monument commemorating the battle, the Saturday Free Press on June 24, 1922, claimed: “It marked a turning point in the history of Canada, in relation to the development of the western prairies, and the expansion of British influence from the Atlantic to Pacific oceans. The Battle of Seven Oaks, if not by its proportions, at least by its circumstances awakened the British and Canadian governments alike to the conditions in the new outpost of the empire and led to action which eventually brought Assiniboia under government administration and, finally, in 1870, after another affray, into the new confederation, the Dominion of Canada.”

The Morning Telegram on December 15, 1906, likened it to other turning points in world history, such as the Battle of Culloden, the French Revolution, the 1837-38 rebellion in Canada, and the American Civil War.

While the claims immediately above are difficult to completely justify, the newspaper was correct in stating that  the battle “was the climax of a war of trade and vindictive rivalry that extended from Lake Superior to the Pacific coast and as far north as the
Arctic circle, between two great fur trading companies ...”

Also apt is the claim by the newspaper: “If it were not for the culmination of the hostile rivalry of the fur-trading companies, it is reasonable to believe that the Selkirk settlement in the parish of Kildonan (the name given the settlement by Selkirk while he was there in 1817), the mother settlement in western Canada, would have ceased to exist, the settlers scattered and agriculture delayed for an indefinite number of years.”

By the time of Seven Oaks, the settlement was truly on the cusp of collapse through the abandonment of the colony by 140 settlers at the urging of the NWC. The colonists took up the Montreal-based fur trading company’s offer of free passage to Canada. The
remaining settlers (sources say 13 families) were driven off and took refuge at Jack River near present-day Norway House.

Those settlers marooned along the shore of Lake Winnipeg were so disillusioned with Selkirk’s Red River experiment that they wanted to go to York Factory and take passage as quickly as possible for Scotland. But the one ship, the Britannia, that could have taken them to Europe had its passage across Hudson Bay blocked by ice and was intently run aground 80 kilometres north of the Severn River. While aground, the ship was accidently destroyed by fire.

With their options limited and through cajoling by James Bird, the superintendent of the HBC’s Northern Department after Semple’s death, as well as the promise of safety provided by the presence of Selkirk’s private army in the colony, the settlers relented and built shelters at Jack River in anticipation of their return to Red River in the spring.

“Despairing of being able to return to their native land, the tidings of Lord Selkirk’s success at Forts William and Douglas was good news indeed,” wrote Robert Hill in his book, Manitoba: History of its Early Settlement, Development and Resources, 1890.

The battle offered one final argument for the demise of the colony, but the recapture of Fort Douglas by Miles Macdonell on January 10, 1817, and the arrival of Selkirk’s private army to protect the remaining settlers ensured the survival of the Red River Settlement.

Nicholas Garry, who gave his name to the Upper and Lower Fort Garry, visited Red River in 1821, and  noted that there were 221 people in the colony, who were the survivors of the conflict as well as the children born in the settlement.

But the real reason for the “culmination” of the conflict, through a merger between the two companies in 1821, was the economic losses sustained by the HBC and NWC. While the HBC had deeper pockets as a result of having better access to credit in England, the financial position of the Nor’Westers was strained to the breaking point. Near the end, both companies also were becoming weary of the unrelenting tension imposed by the conflict.

Essentially, the “private” war (a term used by Coltman) created plenty of unhappy shareholders in both companies, who wanted the conflict resolved so that they could again get down to the business of making money.

The Battle of Seven Oaks simply confirmed to both rivals that continuation of the conflict was not in the best interests of either company. The skirmish ended all prospects of a decisive outcome derived through bloodshed — two well-armed and mutually destructive camps arose following the battle — and laid bare for all involved the necessity to seek another future for the fur trade industry in Western Canada.

Besides, politics had intervened and the British colonial office was willing to do anything within its considerable influence to force an end to the conflict.

Even before the merger in 1821, the colony’s existence was basically assured when Selkirk’s hired troops took up residence at Red River in 1817. It can be argued that if Semple had been more patient and had waited for the arrival of Selkirk and his private army — or at least Macdonell with his party on January 10, 1817 — while safely ensconced behind the protective walls of Fort Douglas (the advice of Colin Robertson not followed), and reinforced by the 70 warriors offered by Chief Peguis (refused by Semple), the tragedy of the Battle of Seven Oaks might have been averted.

But, it is also possible that Grant, after receiving reinforcements, could have laid siege to the fort and secured its capture. Yet, the feisty John McLeod, with just three men, held off a strong attacking force in 1815 using a single cannon which was fired from the far-from-formidable walls of a blacksmith shop. By the time the Métis under Grant appeared at Frog Plain on June 19, 1816, Fort Douglas’ walls had been reinforced and Semple had two artillery pieces to train on any would-be attackers.

What was specifically mentioned by all subsequent witnesses to the battle was that Semple had acted too recklessly by abandoning the protection of the fort. Leading his party outside its walls, in effect, challenged the Nor’Westers and Métis to mortal combat and they were quite willing to oblige, although that was probably not their intention when they initially arrived on Frog Plain. En route to Lake Winnipeg from NWC’s post on the Qu’Appelle River to resupply a canoe brigade from Fort William with food, Grant had been given orders to pass the HBC fort at a distance and avoid contact with its inhabitants. It was actually Semple that initiated the contact with disastrous consequences. Still, Grant later admitted to Pritchard that he had murderous intentions toward the colonists, but not on that day on Frog Plain.