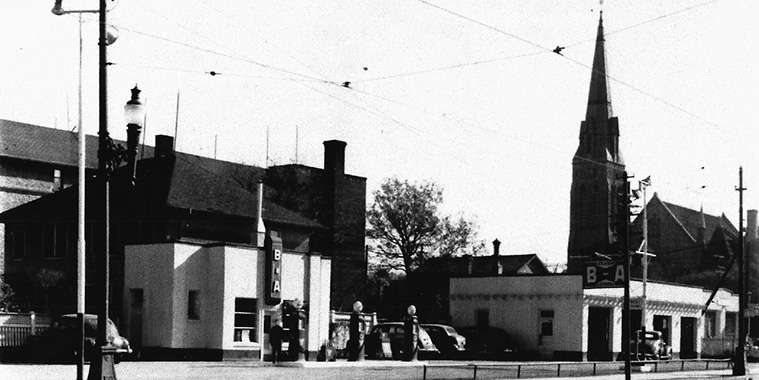 This week, This Neighbourhood in History turns its attention back to Osborne Village and two of its most notable gathering spaces.

As the name suggests, this venue really did start out life as a gas station! Imperial Oil built its first “filling station” at this corner of River and Osborne in 1916 and it underwent several additions and rebuilds over the decades as the nature of the retail gasoline business changed.

The filling station was little more than a gas pump, stack of oil cans and a kiosk for staff. In 1930, Imperial took out a $30,000 building permit to construct its largest service station in Winnipeg. It was home to multiple pumps, service bays and even had a car sales showroom.

Imperial Oil created a new type of service station for the 1960s called “Imperial Centres” and built one here in 1966. It consisted of a 24-hour Esso gas station, tire shop, multiple service bays and a retail store that carried items such as car accessories, barbeques and lawn chairs.

The retail landscape changed again through the 1970s as self-serve gas stations became all the rage with the public and amenities such as attached service garages and general retail stores dropped out of favour with the oil companies. Rather than rebuild the site again, Imperial Oil decided to vacate the corner in 1979 after 63 years.

In 1982, the Core Area Initiative urban redevelopment program targeted Osborne Village as a rehabilitation area. The Riverborne Development Association was provided with a $445,000 grant to purchase the empty service station. A further $700,000 federal grant allowed it to create the Osborne Village Cultural Centre and its 232-seat Gas Station Theatre meant to provide an affordable venue for small and alternative arts groups.

The first show to appear at the new theatre was the Ottawa-based Great Canadian Theatre Company’s play Sandinista on June 1, 1983.

There have been several ups and downs for the venue over the decades. Finances have always been tight, some of its early regular uses, such as the Winnipeg Comedy Festival and Winnipeg Contemporary Dancers, moved on to larger spaces, and there has been increased competition from new venues featuring better amenities.

The Gas Station Arts Centre unveiled a bold redevelopment plan that would have seen a new theatre constructed on the site topped with a 55-unit housing development. It was scrapped in 2016 due to a lack of funding for the housing tower. It has now embarked on a $7 million revamp and expansion of the existing theatre.

Presbyterians in the Fort Rouge area came together to create a congregation in 1887. They purchased land on River Avenue at Royal Street, (now called Pulford Street), and built a “plain but substantial” wooden church that could hold 150 worshippers.

At the time, Fort Rouge was quite rural and the growth of the congregation in its early years was described as “slow but steady.” That changed in 1891 after a streetcar link with Winnipeg was established. Residential development flourished in the neighbourhood and by 1900 the church was bursting at the seams.

On April 25, 1903, the congregation broke ground on a new Augustine Presbyterian Church. Rather than relocate, they decided to purchase an adjoining piece of land next to the existing church. The old building was moved to the back of the lot so that services could continue while construction was underway.

The architect for the new church was J. H. G. Russell. He came to Winnipeg from his native Toronto in 1882 and set up an architectural practice in 1895. In a career that spanned more than three decades Russell designed more than 200 buildings, mostly for Winnipeg. Likely his best-known works today are his grand churches such as Augustine, Westminster and Knox.

The neo-gothic inspired Augustine Church is built of limestone and features an imposing 55-metre tall spire. Inside, it has room for 1,100 worshippers. Its construction cost around $55,000 and a $4,000 pipe organ was added the year after it was built. The opening service was held on October 16, 1904.

The old church building continued to serve as Sunday school space until 1909 when it was demolished to make way for an adjoining two-storey hall.

As with most inner-city churches, the post-war flight to the suburbs and a decline in church attendance saw the size of its congregation shrink at a steady rate.

Augustine decided to embrace the new “hippie” community that was establishing itself in Osborne Village in the 1960s and 70s. It ran regular coffeehouses featuring local musicians and “Feed-Ins,” a free breakfast and supper program in the early 1970s for homeless youth. Since 1981 it has been home to the Oak Table community ministry that provides hot meals and shelter to those in need.

Like the Gas Station Arts Centre, Augustine Church is raising funds to carry out a redevelopment plan that will ensure its future survival. The new Augustine Centre will feature a large daycare, new headquarters for Oak Table, a redeveloped dance studio space and renovations to its sanctuary.