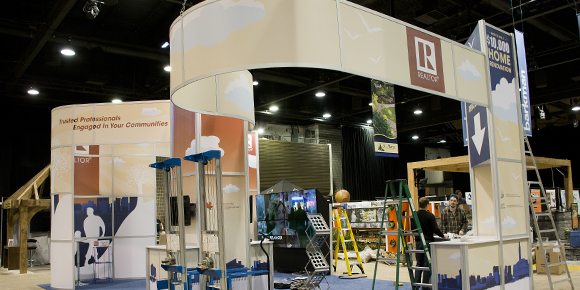 The 2017 edition of the Winnipeg Home + Garden Show, presented by REALTORS®, figures to be even better than the highly successful 2016 show, according to assistant show manager Jenn Tait.

“Last year, we doubled attendance, something that was driven by using the new halls (at the RBC Convention Centre), which are beautiful venues with floor-to-ceiling windows that let in all kinds of natural light,” she said.

“This year, we’ll have three entrances rather than two, as we’ll also be using four halls (A, B, C and D), rather than three, which should make access to the show even easier,” added Tait.

In total, the Winnipeg Home + Garden Show will occupy 131,056 square feet of space, all on one level, making it the ultimate one-stop-shop for consumers looking to improve, decorate, buy or sell their home.

At the forefront of the show, in an expansive 600-square-foot booth, will be an army of friendly Realtors ready to answer any questions people might have, said Blair Sonnichsen, president of WinnipegREALTORS®.

“We invite show-goers to stop by to pose any real-estate-oriented questions they might have to any of the Realtors manning our booth,” Sonnichsen said.

“They’ll be ready to offer advice or suggestions on investments in homes or condos.

“If they don’t have an answer to a question, you can trust them to find an answer for you. They’re not there to rope you in — they’re there to answer any questions you might have,” he added.

“Our volunteers will be there to help you in any way they can,” said Pennycook. “They’ll be there to educate you so that whether you’re buying or selling, you’ll better understand the market, which will help you get better value.

“We invite people to come in any time to chat.”

As was the case last year, Realtors will be holding a grand prize draw. This time around it’s for a $10,000 play structure that was conceived by Winnipeg-based design-build.

“It’s like LEGO made a play structure. Kids can plug in different materials to change the layout as their imagination dictates. It has so many different configurations, kids will never be bored.

“Kids are welcome to come in and try it out, provided they’re supervised,” Nekrep added.

Another big draw at this year’s edition of the Winnipeg Home + Garden Show is expected to be the new feature called the Backyard Escape, explained Tait.

“It will feature lush greenery, seasonal blooms and landscaping, providing a perfect environment to showcase the expertise of Winnipeg’s top authorities on outdoor spaces.

“It’s going to be a great addition to the show.”

She said that the Home + Garden Show — as per usual — will be loaded with star power. Neither will there be a shortage of local talent and attractions.

“HGTV’s Bryan and Sarah Baeumler (Bryan Inc.), and Carson Arthur and Tiffany Pratt (HGTV’s Home to Win) and will be at the show to present on the Urban Barn Main Stage. There will be lots of presentations by local experts, as well,” said the assistant show manager.

“Show favourites, such as Ask a Renovator, The Design Studio, Ultimate Upcycle Challenge, will also be back. There will be other show features, and over 250 exhibitors to visit.”

To find out more about the Winnipeg Home + Garden Show, which  runs from April 6 to 9 at the RBC Convention Centre, visit the website: winnipeghomeandgardenshow.com

At the website, you can buy a Winnipeg Home + Garden Show ticket for a $3 discount.

And don’t forget to drop by the Realtors’ booth to chat with a friendly Realtor. While you’re at the booth, take the time to enter the grand prize draw for the play structure by design -build.