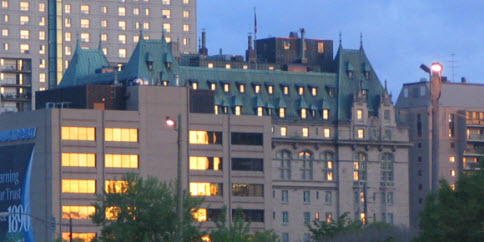 It’s an event that has become a late-November rite for Manitoba-based REALTORS®.

That event is none other than the Manitoba REALTOR® Network Symposium, where Realtors convene to gather information and conceive initiatives designed to build a stronger Manitoba.

This year’s four-hour event, which was held at the Fort Garry Hotel on November 21, was extremely productive, said Lorne Weiss, head of the Manitoba Political Action Committee.

“I think the turnout we had this year is the best we’ve seen so far,” he said. “About 180 Realtors came out to attend an event that featured four different sessions.”

Most importantly, the symposium, entitled Opportunity Meets, built on the momentum that was developed at the 2016 event.

At that time, Realtors were intent on making progress in an area near and dear to their hearts: an initiative designed to promote Indigenous homeownership, as part of the Manitoba Real Estate Assocation’s Tipi Mitawa Program.

Weiss said some real headway was made over the course of the past year.

“We now have 10 families in place with funding coming from the provincial government for another 10 families. Those families are taking training on home ownership, and are getting ready to work with a Realtor (to find a home).”

Another continuing theme was economic development.

Additionally, Realtors will continue to advocate tirelessly on behalf of all Manitobans.

“Our political advocacy program is very aggressive,” he said. “We just submitted a policy paper to the province, are advocating for a single mill rate, looking for fairer tax assessments, better transparency and accountability in government and a more efficient school system — all things that will benefit Manitobans.”

The advocacy doesn’t end there.

“We’re also continuing to ask the provincial government to provide first-time home buyers with a $750 grant (to match the federal government), and are advocating on the (penal) land transfer tax (LTT). Progress doesn’t happen overnight. It’s a long-term commitment that we’re going to keep moving forward on.”

As for the panel discussions held at the symposium, REALTOR® Week chair Harry DeLeeuw said they were highly informative.

“With the political panel, three main issues were discussed: the pending carbon tax, legalization of marijuana, and health care,” he said. “The primary focus was on health care, with the consensus being that we won’t know how things will turn out with all the reforms for at least a year or two. The experts agreed that the government is between a rock and a hard place.”

Next came the panel discussion on building Manitoba.

“Two things came out of the psnrl discussion: that there are so many opportunities that can be utilized to build the economy (Davidson) and that all organizations need more data collection so that we can sell Manitoba’s economic virtues more effectively internationally.”

“It was an informative, entertaining session that covered things like how Millennials and social media influence society, particularly how social media is such a big part of the news we receive. Everyone enjoyed the session and came away better informed.”

“It was phenomenal. It was great to see so many Realtors engaged in building the province, and panelists providing some great perspectives. It’s also exciting to see that some of our programs (i.e., Indigenous Home Ownership Initiative) are making headway.

“Realtors are embracing the opportunity to do their part to build a stronger Manitoba, and all that hard work is starting to pay off,” he added.