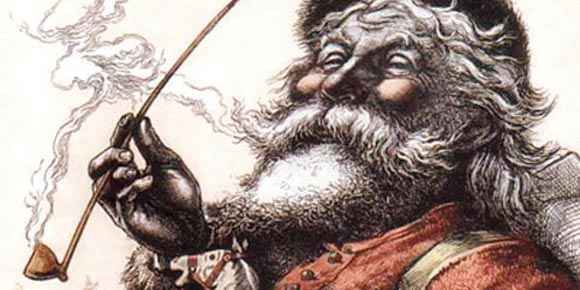 How does an ordinary human being become a mythical figure loved by children across the world?

Well, it helps if that person had performed some extraordinary feats and acts of kindness during his lifetime. Once the extraordinary becomes closely associated with the person, it would only take a few hundred years of shrewd marketing to turn that man into “jolly old St. Nick.”

Basically, the legend of Santa Claus is a tale of marketing — both olden day and modern day. While today’s youth may believe Santa’s belly shakes like a bowlful of jelly, that is not a description known to the Ancient World.

St. Nicholas started out as just a run-of-the-mill monk, born around AD 280 in Patara, near Myra, a seaport in Lycia in the Roman province of Asia, to wealthy parents — future gifts people received from St. Nicholas were the result of an inheritance from his parents.

Little about the historical St. Nick can be accurately verified — most is simply legend — but there are a number of basic aspects of the legend that are quite plausible. Among the more plausible aspects of Nicholas was his devotion, which helps explain why he gained such a high standing in the Christian community.

By the time the monk had risen to become the Bishop of Myra (in modern-day Turkey), Nicholas had earned a substantial reputation among Mediterranean sailors. In one tale, he is said to have suddenly appeared during a life-threatening gale and with a mighty command calmed the storm-tossed waters off the Turkish coast, saving the lives of a ship full of sailors who had prayed for his help. This and similar tales made Nicholas the patron saint of seafarers.

The historical Nicholas is known to have been caught up in the persecution of Christians during the reign of the Roman Emperor Diocletian (AD 284-305). Diocletian’s Edict Against the Christians was issued in 303. Under Diocletian’s edict, all Christian bishops and priests were to be arrested, including Nicholas, the bishop of Myra. Nicholas was at first exiled and then imprisoned.

The persecutions ended and Nicholas was probably released when the Emperor Galerius, who from the beginning was intolerant to Christians, but had a change of heart on his death bed and revoked Diocletian’s edict in 311.

Historically, it is also known that Bishop Nicholas participated in the Council of Nicaea in 325 instigated by the Roman Emperor Constantine (called the first Christian emperor) to end schism in the Church and establish a universal creed (doctrine) to be followed by all Christians.

The principle story associated with gift-giving and Christmas was a tale centred upon a man and his three daughters. The man was too poor to provide dowries to his daughters to enable them to marry into good families. According to the story, the women were doomed to a life of prostitution. Nicholas heard of their plight and surreptitiously tossed three bags of gold — some say gold spheres or coins — into the bedrooms of the man’s daughters. An addition to the legend says that the gold fell into stockings, which is the reason children now hang up stockings on Christmas Eve.

The Western World’s first exposure to the gift-giving St. Nicholas came well after the Roman Empire had collapsed. The Byzantine Princess Theophano was betrothed to the German-born Holy Roman Emperor Otto II; on her westward journey to Rome from Constantinople for the marriage ceremony, she carried an icon of St. Nicholas (now in a German museum). When Otto died in 983, she returned to Germany, bringing with her the legends of gift-giving associated with St. Nicholas.

Over the years, the Western World readily adopted St. Nicholas. In fact, sailors from Bari, on the southeast coast of Italy, were so enthralled with St. Nicholas that during a conflict between the Christian Byzantines and the Muslim Turks, they stole the bones of St. Nicholas from his crypt in Myra in the spring of 1087. To this day, pilgrims and tourists visit the Basilica di San Nicola in Bari where the relics of St. Nicholas had been enshrined after the kidnapping.

Meanwhile, the legend of St. Nicholas as Santa Claus was slowly evolving in Northern Europe. The saint became Sinter Klass, a shortened version of the Dutch name Sint Nikolaas (Saint Nicholas), in Holland, who brought the saint’s legend to New Amsterdam (New York) in the New World. Newspapers in the late 1700s reported that Dutch settlers in New York gathered to celebrate the saint on December 6.

The transformation was complete when John Pintard, a member of the New York Historical Society, in 1804 distributed woodcuts of St. Nicholas during the society’s annual meeting. The background in the woodcuts showed the now familiar image of Santa Claus, and stockings filled with toys and fruit over a fireplace.

Santa Claus was quickly turned into a Christmas advertising icon. In Manitoba, newspapers of the 1870s were filled with Christmas ads featuring Santa Claus. Even then, the commercialization of Christmas was well on its way and intensified as the years passed.

The Winnipeg Tribune on December 18, 1891, promised: “Xmas advertisers can not reach so many Christmas buyers in any other way so cheaply and easily as by advertising in the Tribune.” A year later, the newspaper published this short jingle for the Christmas buying season: “To catch the eye/The Tribune will try.”

One Winnipeg optician offered gold-rimmed glasses that Santa would be proud to wear. A 1906 ad said that $10 Edison phonographs were “Santa Claus’ Favourite Gift.” The Winnipeg-based Morning Telegram on December 24, 1901, declared: “Santa Claus will have a heavy burden on his sleigh when he starts on his nocturnal drive if his hampers are to contain all the goods Winnipeg merchants have delivered into his hands.”

The now familiar image of Santa Claus as a plump and jolly chap was created by artist Thomas Nast in an illustration drawn for Harper’s Weekly in 1863. Before Nast and long after, Santa was drawn in a number of shapes, including as a gaunt figure, although plump was the norm as were red garments and white whiskers, according to a 1927 New York Times article. Nast’s image was adopted by Coca-Cola for its most famous advertising campaign. The Santa ads were drawn by Haddon Sundblom and first appeared in 1931. This image is still ingrained in the minds of today’s youth.