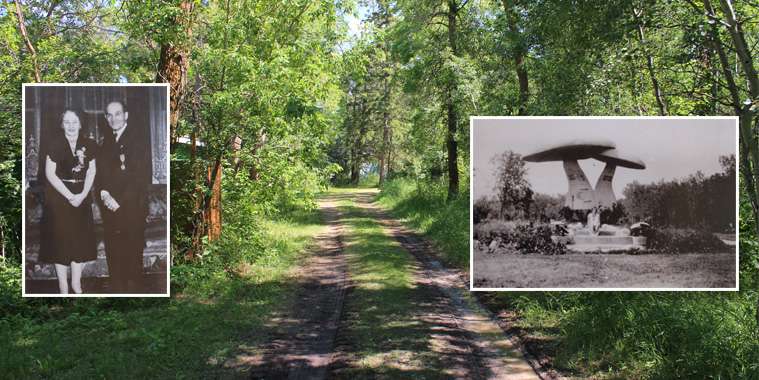 The forgotten resort of Sans Souci in Matlock

Sans Souci at Matlock, Manitoba was one of many summer resorts established along Lake Winnipeg in the early 1900s. Its peaceful surroundings are as far away from the battlefields of France as you can get, yet for the couple who owned the resort, the Calledes, their lives were deeply impacted by both World Wars.

Jean Oliver Callede was born in Rion Landes, France ca. 1886 and came to Winnipeg in 1903. He worked various jobs during the day and as a musician by night. At the outbreak of the First World War, he enlisted with the French army and returned to his homeland to fight. After being injured on the battlefield, he was awarded France’s Croix de Guerre which “commemorate(s) individual citations for acts of bravery”.

Nena Gusinsky, the spelling of her last name is unclear, was born in Russia ca. 1884 and came to Canada in 1909. After training as a nurse, she volunteered with the French forces to serve in a military hospital in France. By the end of the war she had achieved the rank of Nursing Major and received the Gold Palm of the Médaille de la Reconnaissance Française, awarded to civilians who performed “act(s) of exceptional dedication in the presence of the enemy.”

The couple most likely married prior to the war, though a more romantic version of their history claims they first met when Jean ended up in Nena’s hospital ward after his battlefield injury.

After returning to Manitoba, the Calledes settled in Matlock where they ran a store and Nena worked as the area’s midwife. They also purchased a 120-acre hay pasture along the shores of Lake Winnipeg and named it Sans Souci, which translates roughly to “no worries.”

The Calledes lived at Sans Souci year-round and began transforming it into a summer resort by planting trees, building paths and clearing the private beach. The idea for a resort was likely Jean’s who was described by one friend as “a spirit of the woods” and most at peace in the wilderness.

There are newspaper mentions of people visiting Sans Souci in the mid-1920s, but it likely wasn’t until 1927 that it formally opened as a resort. That summer, groups such as the Rotarians used it as a summer camp for children and the Hudson’s Bay Company held their company picnic there.

After a successful first season, the Calledes sold the store to concentrate on building up the resort.

A pavilion was added in 1928 which allowed them to hold weekend dances. By the mid-1930s, the beach had a pier, Jean had built a pair of ten-foot-tall papier-mâché mushrooms nicknamed ‘The Twins’ for children to play around, and there were even a couple of pet bears, Fifi and Toto, that roamed the grounds and took “keen pleasure in entertaining kiddies with their whimsical antics.” By 1938, Sans Souci boasted fifteen “snug, comfortable” log cabins and had a train stop of its own.

The Calledes’ income came from charging admission, which in the early days was ten cents per person or thirty-five cents per carload. This exclusivity was a big selling point for the resort as its ads promised a quiet, relaxing visit away from the bustle and “cheap and tawdry” attractions of other beachside playgrounds.

The resort was at its peak when the Second World War began. The Calledes, in their mid-forties, were too old for the battlefield, so they fought the enemy from Sans Souci.

In 1941, the RCMP expressed concern that the French territory of St. Pierre and Miquelon off the coast of Newfoundland could be used by the Nazis as a North American base for espionage and sabotage. Jean contacted the War Cabinet Office with a plan to raise a Free French paramilitary force to seize the islands on behalf of Canada and prevent them from gaining a foothold. The offer was declined and news about Callede’s plan only surfaced in the 1970s when the government declassified War Cabinet minutes.

After the war, the Calledes were again decorated for their service to France. Jean was made a Knight of the Legion of Honour and Nena received the Cross of Lorraine.

The Calledes, who had no children, sold Sans Souci in 1959 when they became too old to care for it. Nena died in 1964 and Jean in 1969. The new owner continued to operate Sans Souci more as a cottage rental business than a camping resort.

The Sans Souci site still exists today as a private cottage enclave containing a handful of the original log cabins.