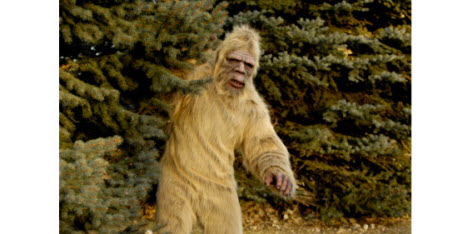 You know Halloween is approaching when there’s an announcement that proof has been found for the existence of some scary “monster.” This week, a press release alleged that wildlife biologists, wilderness experts and police officers from Washington state, Alberta and British Columbia are attempting to prove, “by a preponderance of clear and convincing evidence and beyond any reasonable doubt, that species commonly referred to as Sasquatch, or Bigfoot, exists in the wild.”

The “group of independent researchers” announced they have actually discovered Big Foot and, to make their case, announced the launch of the feature film documentary, Discovering Bigfoot. “Todd Standing ventures into the heart of Sasquatch Country to obtain never-before-seen footage of Sasquatch encounters,” according to the release.

The claim is that eyewitnesses, as well as DNA and fingerprint analysis, “present what researchers are calling undeniable proof that this species exists.”

Apparently, the ultimate objective of the documentary is to convince the Washington Department of Fish and Wildlife, as well the Alberta and B.C. departments of Fish and Wildlife, to do a management report of the species. Standing even proposes to lead a government representative wildlife biologist into the field for a period of no less than three months, when he promises to “show the representative a Sasquatch and all associated signs this species exhibits.”

That will be quite a feat, since no one has ever produced a Sasquatch in the flesh. The only evidence of a Bigfoot’s supposed existence has been some very suspect foot casts and hair tufts, and grainy film and photographs, which are far from conclusive.

Like all Halloween monsters, Bigfoot remains firmly entrenched in the realm of superstition and imagination, since people have a tendency to see what they want to believe, regardless of how outlandish. A 2014 Chapman University Survey on American Fears found that Americans are as likely to believe in Bigfoot as they are confident that the universe began with a big bang, despite the measurable scientific evidence of an ever-expanding universe, supporting the latter, and no real proof of the former.

“Human beings are, in general, a superstitious lot,” Christopher Ingraham wrote in a Washington Post article about the study. “Our tendency to see patterns where they don’t exist, and to falsely apply cause to effect, may have helped keep us alive back when we were little more than a band of frightened critters scurrying about the savanna. Those tendencies linger to the present day, reflected in our stubborn belief in completely irrational things: Rabbit’s feet. Horoscopes.”

Among the Manitoba monsters that some claim to exist is Manipogo, who allegedly lurks in the depths of Lake Manitoba and occasionally makes forays into lakes Winnipegosis, Winnipeg and Dauphin. The name Manipogo was given to the so-called lake monster by an enterprising newspaper editor, who combined part of Manitoba with part of Opopogo, a monster that allegedly lives in B.C.’s Okanagan Lake.

Fred Cleverley, in a July 28,1979,  Free Press column, wrote that editors, “year after year, used to send honest-but-(financially) poor reporters into the Dauphin area to write about Manipogo, the legendary monster ... The reporters knew the difference between news and fiction, and knew that Manipogo didn’t exist. But who could deny the rewards? When one enterprising reporter dreamed up the underground river that might link Lake Manitoba and Lake Dauphin, so that the monster could be in two locations only a day apart, the managing editor passed his expense account with hardly a second glance.”

The May 10, 1965, Free Press (the ’50s and ’60s were the period of the greatest number of Manipogo sightings), reported that Ralph Sanderson saw a snake-like monster swimming at the same speed as the boat he was in, and was travelling with an up-and-down motion. “About 15 feet of scaly body were said to have been visible at the time.”

There were many alleged sightings of a creature prior to the 1960s. In April 1918, Oscar Frederickson claimed to have observed signs of the monster while he was shooting ducks on Fuller’s Bay in Lake Winnipegosis. At the time, the ice was one to two feet thick. Suddenly, “something heaved the ice upward in two or three feet of water ... Slivers of ice a foot long fell on the south side and a piece of loose ice six to eight feet wide began to rotate very slowly” (Free Press, August 18, 1962).

Here’s the kicker: He didn’t see the cause of the rotating ice, but he suspected it was the lake monster he had heard about.

In 1935, Cyrus Field Ross, a Manitoba timber inspector, and Tommy Spence, of Pine Falls, were at Dirty Water Lake near the north end of Lake Winnipegosis, when they saw a “strange beast” with a single horn protruding from the back of its head like a periscope. The animal’s head was small and flat and it had a body like a dinosaur, and was “slate-grey” like “an elephant.”

St. Boniface resident C.P. Alarie, was in a boat in 1948 near Ste. Rose du Lac, on Lake Manitoba, when he heard “a hideous, unearthly cry” in a marsh near shore. He then saw “a brownish-black thing about six feet long,” which reared up for several seconds and then disappeared.

Near Graves Point in August 1955, Allen Gott, of Pelican Point, fishing with Joe Parker, of Mafeking, and his two sons, described something “about half a mile away, about four feet out of the water, and 2 1/2 feet thick.” The creature disappeared when they rowed within about 350 metres of it.

Other sightings suggested a family of Manipogos cavorted in the lake.

A photo of Manipogo, which was published in the 1962 Free Press, does allegedly show a snake-like creature emerging above the waves of Lake Manitoba,  “The picture wasn’t clear, and it might have been of something else — a floating log, for instance.”

Two years after the photo was published, sightings of Manipogo diminished. Believers cited poor climate conditions, including too much wind and rain. Skeptics claimed the earlier publicity had dramatically increased visitors at Manipogo Park, near Toutes Aldes on the northern tip of Lake Manitoba, so sightings were no longer necessary to attract the curious.

Sea monsters did once inhabit Manitoba, although only when a vast “tropical” inland sea covered the centre of North America. The Canadian Fossil Discovery Centre in Modern contains “Bruce,” a 13-metre (43-foot)-long Mosasaur (Tylosaurus Pembinensis), the biggest such fossil unearthed, that lived during the Cretaceous Period, roughly 80 million years ago. Mosasaurs, flying reptiles and dinosaurs (except birds) all disappeared 65 million years ago, so nobody should imagine that such a warmth-loving creature — or any other similar monster —survives to this day in our lakes that are covered each winter with a thick layer of ice.