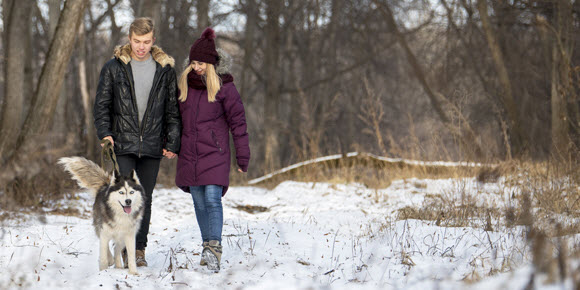 Winter in the city

A handful of San Jose Sharks players have expressed their opinion that Winnipeg is their least favourite city to visit during the depths of a Manitoba winter. In a video posted to the Twitter page from NBC Sports California, the Sharks’ Tomas Hertl said he doesn’t like Winnipeg because “it’s so cold and dark there.” Defenceman Justin Braun was equally critical of Winnipeg, singling out the hotel the team stays in during road trips as “questionable” and openly wondered whether the city is connected to Wi-Fi. Another defenceman, Tim Heed, ranked Winnipeg as last.

It should be pointed out that the Sharks lost 4-1 to the home-team Jets. It seems playing in the city is a very painful experience to visiting teams, regardless of the time of year. In fact, Winnipeg had to that point won 16 games as the home side as opposed to only three losses. The Jets currently stand in first place in the NHL’s Central Division.

Heck, there’s no denying that it can be brutally cold in Winnipeg during the winter. It’s a fact of life in the prairie city where Arctic air masses continually drop down during the height of winter, creating bone-chilling conditions. It’s not uncommon for the thermometer to dip to as low as -30°C or -40°C, and that’s without taking into account the wind chill.

Winter doesn’t exactly stir up strong feelings of love for some, who would rather remain indoors or flee south to some hot Caribbean country when the snow begins to fly. Canadians have a love-hate relationship with winter, according to the 2015 national survey, Blue Monday. The survey revealed that 43 per cent of Canadians have experienced or are currently experiencing winter blues. The survey, commissioned by the Weather Network, found that from January to March, Canadians are more likely to report feeling tired (54 per cent), lethargic (35 per cent) and depressed (24 per cent) rather than energetic (seven per cent) and happy (19 per cent).

According to the survey, more than half of Canadians are less inclined to socialize, 58 per cent said they are less likely to exercise, 69 per cent sleep more and 71 per cent report a noticeable drop in energy during the winter.

For the record, Blue Monday is a name given to a day in January (the 15th this year) claimed to be the most depressing day of the year. The concept was first publicized as part of a 2005 press release from holiday company Sky Travel. Dr. Cliff Arnall claimed to have calculated the date using an equation, including the amount of time since Christmas, time since we probably failed New Year’s resolutions, low levels of motivation, weather, level of debt and the current ability to pay it off and the desire to take charge of the situation, which isn’t always possible.

There is no science behind it. In fact, scientists call the concept of Blue Monday “nonsensical.” Blue Monday was a PR invention that has stuck, somehow, and become an annual event.

Arnall has apologized for inventing Blue Monday, saying he never intended to create such a negative connotation and that January is a great time to start new things and make positive plans for the year ahead (Mattie Lacey-Davidson, Watford Observer).

Blue Monday or not, there are many Manitobans who embrace the winter. Some skate at community arenas and on ponds, lakes and rivers, while others play road or ball hockey, figure skate, snowmobile, toboggan, hike or ski, etc. Still others eagerly await the winter in anticipation of a new curling season or the commencement of the Jets or Moose hockey season, as well as the hockey games to be played at the local arena by Peewees up to the junior ranks.

In the end, there’s always plenty to do during a Manitoba winter, including the numerous town and city winter festivals. St. Boniface, Winnipeg’s French quarter, is transformed into a winter paradise and becomes host to the largest winter festival in Western Canada in February (Festival du Voyageur website). “Voyageur, Métis and First Nations histories are brought back to life, not only through the historical interpretation offered inside reconstructed Fort Gibraltar, but also through the many attractions inside Voyageur Park and at the festival’s various official sites. Music of old, traditional cuisine, sensational snow sculptures and captivating shows are but a few examples of the entertainment you can expect to witness during this convivial gathering.”

What’s not to like about winter when there’s so much on the menu?

“Once the NHL playoffs get into full swing and the Sharks have some time on their hands, I’d be happy to tour them around and show them all that Winnipeg has to offer — festivals, food trucks, sunshine, world-class attractions and one of the best culinary scenes in the country.

Spiring also noted that Winnipeg is the second most sunny city in Canada with an annual average of 2,353 hours. Calgary is tops with 2,396 hours of sunshine.

The CBC report also pointed out that in the winter months Winnipeg’s average temperature is -12°C during the winter and 26°C in the summer.

Here are some tips from the Weather Network to beat the winter blues:

• A calm mind is a clear mind. Take 10 minutes daily and practice a mindfulness technique. Focus on breathing. Take deep breaths, inhaling through the nose and exhaling, slowly, through the mouth.

• Soak up the winter sunlight. Take a walk during break time and take advantage of natural sunlight even if it is cold outside. Keep curtains open and your workspace well lit.

• Express your creativity. Creativity could be anything you enjoy doing that is effortless and enjoyable, for example, cooking and baking, woodworking and home do-it-yourself DIY projects, etc.

• Step away from your work area and take a break during the lunch hour. It’s also a good time to replenish nutrients the brain needs to ensure you remain active and alert during the afternoon without dragging your feet.

(Note: Just prior to publication, Sharks GM Doug Wilson apologized for the comments made by the players.)