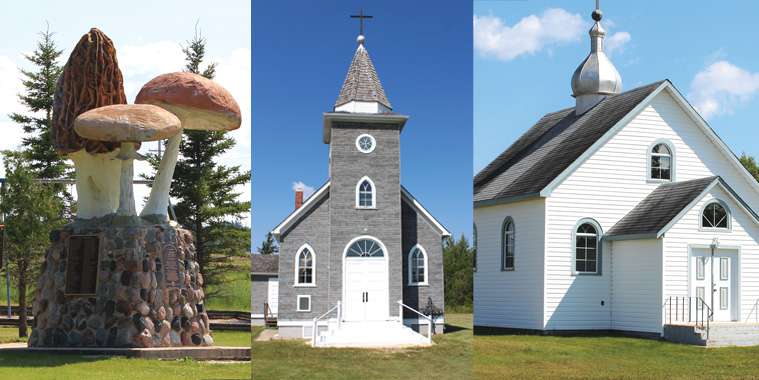 The community of Meleb, Manitoba, in the rural municipality of Armstrong, is located 100 kilometres north of Winnipeg on Highway 7.

The region was settled mainly by Ukrainian and Polish settlers starting around 1900, though a townsite did not develop until a CPR spur line from Winnipeg to Arborg came through the region in 1910. The railway siding was built on land donated by a Ukrainian farmer named Stephan Melnyk and a Jewish merchant named Abraham Lebman. Their surnames were combined to create the name Meleb.

Meleb was always a small settlement and its immigrant communities had to work closely together to make it viable. CPR guidebooks through the 1920s note that the townsite had a population of around 40 with a trading area of 350. A 2007 newspaper article about the closing of the Meleb post office pegged the area’s population at around 60.

For such a small community, Meleb’s past is well documented. The history book, MLC Flashbacks, was published in 1989, and there are several historical markers and an original map of the settlement at the townsite. Some of Meleb’s early buildings still exist which makes it well worth a visit for history buffs.

The land was donated to the cause, and after three years of planning and fundraising, the park became a reality. It features scale models of the three schoolhouses, the community’s war memorial and an interpretive display that includes a settlement map of the area. There is also a picnic shelter, playground area and washrooms.

The most noticeable feature of the park is the giant mushroom statue. It is made of fibreglass with a steel frame and created by artist Wayne Arthur, whose other work includes the King Buck statue at Poplarfield.

A three mushroom logo was first used for the 1990 school reunion — one to represent each school. The three varieties of mushroom in the statue represent ones that grow in the area and were a staple in the diet of early residents. There is a 1.8-metre-tall honey mushroom, a 2.5-metre-tall bolete mushroom and a 3-metre-tall morel mushroom.

According to the book “Polish Churches of Manitoba,” Polish settlers first considered building a church at the nearby community of Malonton in 1915, but were persuaded to instead help build a church for Ukrainian Greek Catholics. The favour was returned in 1917 when it came time for the Poles to build a church of their own.

St. Michael’s is an example of how Meleb’s small ethnic groups came together to build a community. It is said that the land for the church was donated by a Ukrainian family, the Melnyks, and that two Jewish merchants, Lebman and Naidych, each donated $500 to assist in the construction. The contractor was Austrian immigrant Michael Gottfried who had volunteer labour from Polish and Ukrainian Catholics.

The church was consecrated by Alfred Sinott, the Catholic Archbishop of Winnipeg, on September 29, 1918. It was named ‘Michael’ to honour Gottfried and the many other Michaels who constructed it!

The church’s small congregation began to dwindle through the 1950s, and the final service held there was a funeral in 1964. In May 1989, the church was canonically closed and ownership was transferred to the R.M. of Armstrong which successfully had it designated a Provincial Heritage Site.

A committee was formed to raise funds so that significant repairs could be made to the building and transform it into a community meeting space. A Thanksgiving mass was held in the renovated building on September 30, 1990.

The community’s Ukrainian and Polish communities shared St. Michael’s church until 1923, when
Meleb’s Ukrainian Catholics built one of their own right across the street.

It was constructed by Hrynko Zabolotskyi with the help of volunteer labour. Many of its interior murals are by Ukrainian-born artist Jacob Maydanyk.

Near the church is a memorial stone for Lance Corporal Pete Trakalo of Meleb who was killed in action in France on August 16, 1944, at the age of 27. There is also a cairn commemorating the area’s Ukrainian and Polish Settlers erected in 1957.

The Assumption of the Blessed Virgin Mary is still an active church.

Christian writes about history on his blog, West End Dumplings.