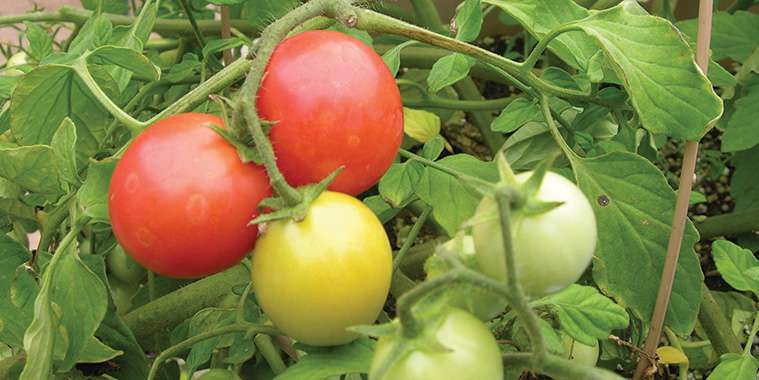 All about the versatile and wonderful tomato

In 16th century Britain, the lovely clusters of yellow, cherry-sized fruits of a tomato variety were called golden apples. They were grown for their beauty but not as a food because they were thought to be poisonous. Turns out it was the pewter plates the Brits ate from that were the culprits. Acid from the tomatoes encouraged lead to leach from the pewter, causing symptoms of vomiting and sometimes death.

All tomatoes can trace their ancestry back to the high areas in the Andes where the plants produced pea-sized, but delicious, yellow fruits. The English thought that the fact that the Mayan could eat the fruit without harm had to do with their hot weather.

When the tomato hornworm first made its appearance in the gardens of tomato growers, there was fear and horror. “They are as poisonous as a rattlesnake,” declared Ralph Waldo Emerson, after capturing one the of these five-inch worms in a bottle. That was, of course, not true. While the tomato hornworm will eat the leaves of tomatoes and sometimes the fruit itself, they turn into a beautiful hawkmoth that is sometimes taken for a hummingbird. The worm is fascinating, long and green and thick as a human finger, with a horn on its tail end.

Technically, tomatoes are a berry, but are commonly served on the dinner menu as a vegetable. It wasn’t always that way. Back in the 1870s, green tomatoes were commonly used in dessert in the southern U.S. Green tomato pie, tomato preserves and tomato jelly all included plenty of sugar. Nevertheless, in 1893, the U.S. Supreme Court declared for tax purposes that the tomato was a vegetable because it was eaten for dinner and not dessert.

The botanical name for tomato is Solanum
lycopersicum, which translates to English as “wolf peach.” From the German wolfpfirsich, it is thought that tomatoes got this name because the tomato plant looks very similar to the deadly nightshade plant which they thought was used by witches to turn people into werewolves.

Today, hybrid tomatoes have lost a lot of their zing. In the middle of the last century, scientists discovered how to turn tomatoes uniformly red, rather than to leave a green ring around the stem. This characteristic was widely bred into tomatoes, both for the grocery and the garden. Unfortunately, this reduced the sugars in the fruit, dulling the taste. That may soon be reversed, however. The so-called TomLoxC gene responsible for the delicious aroma, sweetness and just right amount of acidity, has been isolated and is being reintroduced to hybrids. Occurring naturally in some tomatoes, you can taste TomLoxC in the delicious Sweet 100s, the cherry tomato. By the way, yellow tomatoes are sweeter than reds.

We do other interesting things with tomatoes. Tomato plants have been grafted onto potato plants, rendering a plant that grows cherry tomatoes on top and potatoes below the ground. Both plants are from the genus Solanum, so it isn’t as crazy as non-gardening news reporters suggest. The problem in the past has been getting hybrid tomatoes that taste good. Apparently, these tomatoes have a high sweetness rating.

Taste is one of the reasons people love to grow heirloom tomatoes, although they don’t all carry the TomLoxC gene. Another desirable trait is that the seeds will produce fruit that is true to its parents. To save seeds: Pick tomato when ripe. Chop or mash. Place in a jar until half full. Fill with water. Shake from time to time over the next one to six days until they decompose and seeds sink to the bottom of the jar. Clean and rinse. Dry on a paper towel for about a week. Store. These actions will discourage any disease lingering on the seeds and will make the seeds easier to germinate by removing the gel-like sack that inhibits germination.

Tomatoes have played a role in the economy more than once. In 1922, William Estler developed a huge tomato which became known for its economic value as Mortgage Lifter. Even during the depression, a mechanic named Charlie Byers developed another tomato that had huge fruits. He sold the plants for a dollar apiece and paid off his mortgage of $6000.

Store your tomatoes with the stem side facing down to keep them fresher for longer. There is moisture loss of five percent through the stem end when tomatoes are stored stem end up. Store tomatoes on the kitchen counter until they are fully ripened. Then put them in the fridge. Storage at this temperature will stop them from ripening further. Let them warm to room temperature before eating to restore some of the flavour.

Inconsistent watering cans cause blossom end rot. Temperature (tomatoes like the daytimes to be between 15 degrees to 29 degrees C and 15 to 20 at night) can catface or scarring near the blossom end. Sunscald can result in mottled skin or white patches. Let the plant’s leaves provide natural shade.

This is the time of the year to watch for late tomato blight, which can destroy a crop overnight. You can start spraying copper spray on your plants as a preventative, but this is one blight that is hard to deal with. Fortunately, it visits Manitoba only occasionally.

Dorothy Dobbie is the founder of Manitoba Gardener magazine and the Local Gardener series. Visit us at localgardener.ca.