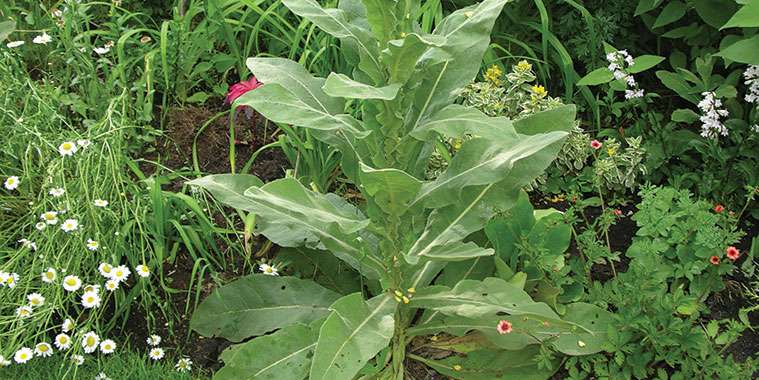 Mullein is a noxious weed to some, a garden wonder to others

Passersby often ask in wonder what that tall stately, fuzzy, gray-leaved plant is in my garden. It definitely makes a statement, growing up to eight feet tall on a straight, upright stem. Its large woolly grey leaves grow in attractive rosettes, although it is flowerless for the first year of its biennial life. In the second year, its now-alternate leaves grow more upright to deliver water to the roots. Yellow flowers grow along the stem, starting about three-quarters of the way up, opening a few at a time from the bottom up.

As with so many plants, mullein, Verbascum thapsis, is a noxious weed to some, while it’s a garden wonder to others. In Alberta, it is classed as noxious, but in Ontario it makes both the weed list and the Ontario wildflowers list. Manitoba is silent on the subject of mullein.

It has been hybridized in many lovely varieties with large, eye-catching flowers, but few if any of these varieties are hardy here.

This amazing survivalist plant attracts a great many pollinators but it is also self-pollinating. Thanks to this and its size, one plant can produce up to 150,000 seeds that can remain viable at least 100 years without any external protection.

There are over 30 common names for mullein, collected over its millennia of practical use in the pharmacopeia. Some of its more colourful handles? Bunny’s ear, flannel-leaf, beggar’s blanket, velvet plant, felt wort for its soft leaves; candlewick, Jupiter’s staff, Aaron’s rod, torches and hag’s taper for its tall, woody stalks, which were often used as torches, easily lit thanks to the fine, volatile oil-filled hairs on its leaves. The Romans dipped the stalks in tallow to keep them burning.

Recorded history dates mullein back to Roman times, but it was doubtless in use long before that. A staple in treating many conditions, mullein was chiefly helpful in managing respiratory illnesses. It is still so used in Germany and is said to relieve coughs and colds by serving as an expectorant. It was even used to treat tuberculosis, where, counterintuitively, its dried leaves were smoked to alleviate consumption coughs. It has been used to treat herpes simplex type one and some anti-influenza strains. Other prescriptions were written for the treatment of everything from hemorrhoids to ear infections, toothaches, migraines — the list goes on.

Poachers used mullein seeds, said to contain rotenone, to kill fish. Ethanol from the leaves killed mosquito larvae. And first year’s leaves were often placed inside shoes as insulation and to provide cushioning.

Verbascum is a corruption of the word barbascum or barba meaning beard, for its hairy leaves and stalks. The fuzz on these leaves can cause mouth irritation for some people.

Common figwort (Scrophulariaceae), a family that includes foxglove and penstemon as well as mullein, was used to treat hemorrhoids, also known back then as figs. The plant was also used to treat scrofula, a tubercular infection of cows.

Mullein, until very recently, was the chief remedy for tuberculosis in people. It is now being scientifically examined for its beneficial properties in treating the disease.

Mullein contains mucilage which helps to soothe membranes and serving as an adhesive in glues. It contains saponins that loosen phlegm and provide foaming agents in soaps.

Remarkable and attention getting as it may be, getting rid of the plant once it is established is not easy. It simply produces so many seeds that once it flowers you are guaranteed to get revisits.

Here are some strategies: 1. Hand pull the plant before it ripens and distributes its seeds. Consider covering the seed head with a plastic bag tied to the stem before disturbing the rest of the plant. Introduce a biological control such as the mullein moth. Plant other invasive plants all around the mullein to choke them out. Of these, I recommend pulling.

Dorothy Dobbie is the publisher of Manitoba Gardener magazine. Call 204-940-2700 for a subscription or go to localgardener.net. Tune in to CJNU 93.7 FM Sundays at 8:00 to hear Dorothy and her guests talk gardening.