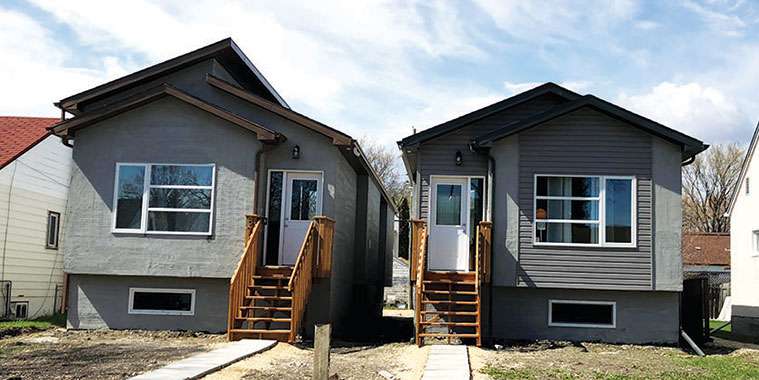 AIC-MB study: no decline in value due to infill

You’ve been reading a lot in this space lately about infill housing, so you know that WinnipegREALTORS® supports good infill development in Winnipeg. This includes infill within mature neighbourhoods where older housing stock either needs to be completely upgraded, or replaced, in keeping with a modern, growing city.

Recently, WinnipegREALTORS® was pleased to have its members from the Appraisal Institute of Canada-Manitoba Association (AIC-MB) come forward and offer to get involved to objectively estimate how infill projects impact surrounding property values. The results of their study should be of particular interest to anyone who is experiencing infill in their neighbourhood.

Jason Schellenberg, AACI, P. App — President of the Manitoba chapter of the AIC — made a presentation at the January 2019 meeting of the City of Winnipeg Standing Policy Committee on Property and Development, Heritage and Downtown Development, which was presented jointly with WinnipegREALTORS®. The following is a mostly complete transcript of the information that Schellenberg presented at that meeting:

“The AIC is the premier real estate property valuation association in Canada, with over 230 members in Manitoba. In 2018, AIC-MB members conducted nearly 33,000 third-party appraisals with an overall value of over $29 billion.

“When talking about infill housing, a frequent concern raised by the public when learning that a development or lot split is being planned in a mature neighbourhood, is a perceived negative impact on the property values for existing residences. As appraisers, when we saw WinnipegREALTORS® was undertaking this kind of study, we saw an opportunity to partner with them to assist the City of Winnipeg and the public with unbiased, evidence-based market analysis on what value impacts there were (if any) related to such projects, as providing independent, third party opinions of value is at the core of what we do.

“We spoke to City Planners and were provided a list of six areas with recent infill projects that we then examined for value impacts. They are as follows:

2. Multifamily apartment developments along Tache Avenue in St. Boniface including:

6. Multiple redevelopments (many splits of 50-foot wide lots into two 25-foot wide lots) in Glenwood Heights. Reviewed from 2015 to 2018.

“I, along with fellow appraisers Rebecca McClure, CRA, P. App and Gerry Lachance, AACI, P. App, completed a review and analysis of each area for property sales that occurred before and after each infill project was announced and built to see if there were any declines in value during this time. Not all areas had enough local re-sales data to determine a trend, but for the areas where there was enough data, by comparing re-sales of the same properties both before and after the projects were built, most properties showed a market value increase of 2-4% per year, which is fairly consistent with what the overall market saw during that same timeframe.

“The one impact we did observe was that there was reduced sales activity and longer exposure times for existing properties marketed during the time when infill construction was happening nearby. In other words, those who were trying to sell their property while a nearby project was under construction did not sell their home as quickly. This impact appeared to be mitigated once construction was completed.

“The analysis we completed may not reflect what would happen to a given home, next to a certain project in a specific neighbourhood, but in general we saw that impacts are likely to be highly localized and would not impact the entire street or neighbourhood in the long-term. An individual resident may not like to see change, and they may feel the enjoyment of their home is diminished if there is now a larger two storey home next door replacing a smaller bungalow, and possibly blocking the sunlight they once enjoyed in their backyard. However, we did not observe the overall market discount a property for this kind of factor in such situations.

“Another concern that is often raised is about conformity, with existing residents preferring to see homes of a similar style and finish replace those that were removed. In general, conformity to the neighbourhood is a good thing, and a home that is significantly larger, smaller or different in finish from most in the area will often see its market value suffer relative to its cost to construct. One of the principles observed in appraisal literature is how the market prefers conformity within a neighbourhood, but this does not mean that every new home has to look exactly the same as what is already on the street. For example, from what we have seen, a home with stucco finishes when most of the area has siding does not bring down the value of other homes in the neighbourhood. Details like that are largely an individual buyer preference, and not a value impact to the market overall.

“To summarize, as appraisers, our goal is to be impartial and not to advocate or promote the interests of any one stakeholder, but rather to measure and objectively report what is happening in the market. And to date, in the study we completed and within the areas examined, we did not see any pattern of declines in market value related to infill housing.”

A copy of the report that was prepared was left with the Committee, and a copy can be downloaded at http://bit.ly/AICInfill2018. If you have specific concerns about the impact of infill housing on property values in your area, you can use the Find an Appraiser tool at www.AICanada.ca and consult with an appraiser to examine the potential for value impacts to your property or area.