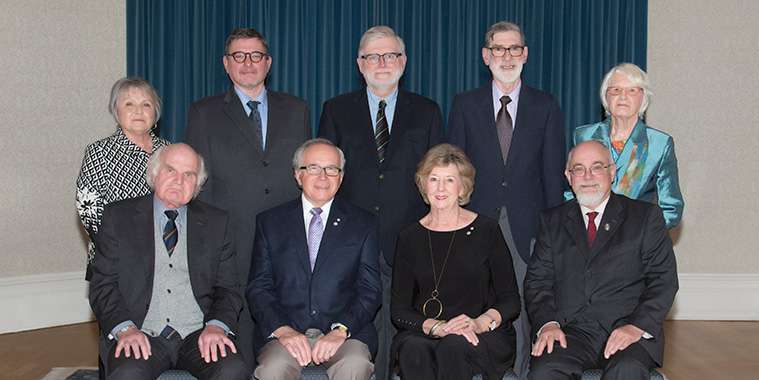 Each year, up to five individuals are recognized for their service in the preservation and promotion of the province’s history through the Lieutenant Governor’s Historical Preservation and Promotion Awards.

This year’s presentations were made by Her Honour the Honourable Janice C. Filmon, Lieutenant Governor of Manitoba at Government House on May 19, 2019.

The awards made in conjunction with the Manitoba Historical Society (MHS) and nomination forms are available at its website. The MHS’ Gordon Goldsborough says of the winners: “The vast majority of those chosen to receive the award are unpaid volunteers and none of them do what they do for the praise. But it is nevertheless nice to have an opportunity to show them that we appreciate their work.”

Congratulations to all five of this year’s recipients and thanks for all that they do to keep Manitoba’s history alive:

Barry Bills (Brandon) Though he now resides in Brandon, Barry Bills spent many years in high-school English and history classes at Portage la Prairie. In addition to engaging his students to learn about local history, he and one of them wrote a book to mark over 100 years of history at Portage Collegiate.

For over 20 years, Bill served as a member and chair of the Portage la Prairie Heritage Advisory Committee which resulted in two inventories of heritage homes, an inventory of heritage businesses, and identification of heritage sites in the R. M. of Portage la Prairie. They also prepared brochures for tours, advocated for a municipal bylaw to protect heritage spaces, and a policy to name streets after noteworthy persons.

Bills was a founding member and Treasurer of Portage la Prairie Heritage Inc. where he was active in efforts to purchase the Arthur Meighen residence and in the 15-year “Save the CP Station” project that opened officially in November 2018. He was also a volunteer archivist for the Portage la Prairie Regional Library and participated in a fourteen-year project to research the history of Delta Marsh.

Jim Blanchard (Winnipeg) was a librarian at the University of Manitoba for over 22 years where he used his considerable skill at research for the benefit of scores of students and academics. He has been an active member of the Manitoba Historical Society, including as President from 2000 to 2002 and co-chair of the Dalnavert Museum Management Committee from 2004-2005.

Blanchard’s keen interest in Winnipeg history are evident in two award-winning books that he has written, (Winnipeg 1912 and Winnipeg’s Great War). A third book will be published this Autumn. He has also written book chapters, including one on the life of early Manitoba Premier Rodmond Roblin, along with numerous magazine and journal articles, newspaper columns, and book reviews.

Most recently, Blanchard has been a staunch advocate for the reopening of the City of Winnipeg Archives in its former home in the Carnegie Library.

Diane Dubé  (St. Georges) is the driving force behind the St. Georges Museum, having been its director and curator since 2009. The museum rebounded from a disastrous arson fire in 2014 as Dubé led the salvaging and restoration of its damaged collections, spearheaded campaigns to raise funds for its reopening as the Winnipeg River Museum, and coordinated the rebuilding of its infrastructure in a magnificent new structure overlooking the river.

Dr. Maralyn MacKay-Hussain (Selkirk) has been a long-time volunteer at the Costume Museum of Canada from the time when it was situated at Dugald. After three years in Winnipeg, the museum was forced to close its doors in 2010. It was at this difficult time that MacKay-Hussain took on the role of President, serving with perseverance and dedication.

Without a home for the museum’s vast collection of over 35,000 artifacts, MacKay-Hussain helped to find storage to maintain its security and preservation while working to put the museum back on a firm financial footing. She assisted in the development of travelling exhibits that demonstrate that success can be achieved by reversing the traditional role of a museum: rather than people going to the museum, the museum comes to them.

Although she relinquished the Presidency in 2017, MacKay-Hussain remains an active member of the museum’s Board of Trustees.

Bruce Tascona (Pilot Mound) has been an active researcher and advocate for the military history of Manitoba since the 1980s. He was the founding President of the Military History Society of Manitoba and serves as its Archivist/Librarian. He has also been Archivist for the Royal Winnipeg Rifles Museum and a Director for the Legion House Museum.

Many have come to know Tascona through his pioneering work at the site of Camp Hughes, a First World War training site west of Carberry. Not only has he been active in studying the site, he has been instrumental in its designation as a Provincial Historic Site in 2004 and a National Historic Site in 2011.

Tascona shares his passion through the development of interactive events and school programs such as the re-enactment of military events in period costume and the Manitoba World War One Museum at his rural home property. He has also authored or co-authored nine books and numerous pamphlets on military history.