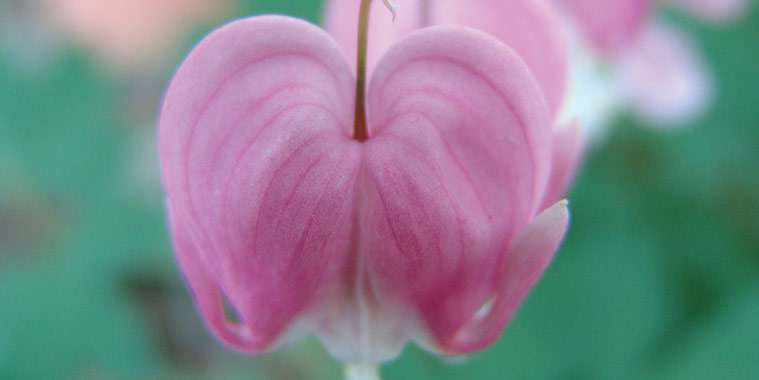 One of the loveliest and earliest spring flowers in the garden is the shy bleeding heart. Known botanically as Dicentra spectabilis, the word “dicentra” is from the Greek dis, meaning twice and kentron, meaning spur.

Bleeding hearts usually produce pink flowers, but there are red and white hybrids available, too. ‘Gold Span’ has golden yellow foliage. ‘Alba’ has all white flowers. Both are lovely.

Bleeding hearts have other names, too. A wild North American variety is called Dutchman’s breeches. Another name is lyre flowers, for its graceful shape. Turn it upside down, pull back the breeches and suddenly you see the reason some people call it lady-in-a-bath. The common name of one variety from eastern North America is squirrel corn for its tight, corn-like clusters of bulbets.

A big patch of bleeding heart is a boon to hummingbirds who are this lovely plant’s main pollinator. They slip their long slender bills between the pink sheets and up into the nectar-rich white interior.

Grow them in light to medium shade in a well-drained location. Sow in fall so that the seeds can go through scarification (exposure to cold). The plants will emerge early in spring, growing from one to three feet tall and wide. Each raceme will produce about 20 delicate blossoms.

Many are ephemeral (meaning that they bloom, then die back early in the year). While their pretty, deeply dissected leaves would be a plus in any garden, those that die back can open up room for a late blooming plant in a full perennials garden. Deer tend to avoid their alkaloid-filled stems and foliage.

Many bleeding heart varieties are rhizomatous, sending out runners underground. Others have root bulbets shaped like little teardrops. Although they will grow happily for 30 years without transplant, they are easy to increase by dividing every five years or so. Bleeding hearts have brittle, tuberous roots that will break off easily when being transplanted, meaning you will often get regrowth in the very spot you thought they had vacated with the transplant.

You may also have been surprised by a bleeding heart showing up in your garden as if by magic. It may have been planted there by an ant from a neighbouring yard. Bleeding heart seeds contain eliosome, lipids or molecules that include a lot of ant nourishment such as vitamins A, D, E and K, not to mention glycerides, fats, waxes and sterols. Ants gather the seeds, eat the eliosome and toss the remaining seed, unharmed, in the midden where it often sprouts.

Scot botanist and plant smuggler, Robert Fortune, is credited with bringing bleeding hearts to the Royal Botanic Garden in Edinburgh between 1848 and 1851. He was a busy man in his short time in the Far East, being the one who smuggled tea out of China and into India, when the export of Camellia sinensis was forbidden.

Eat enough bleeding heart parts and you could encounter trembling, vomiting, diarrhea, convulsions and trouble breathing. However, if you have a toothache, dicentra root can numb your gums and help you through it. Best idea is to simply admire it for its delicate beauty.

Dorothy Dobbie is the publisher of Manitoba Gardener magazine on newsstands everywhere. Subscriptions at 204-940-2700 or localgardener.net. Listen to her garden show on CJNU, 93.7 FM every Sunday morning at 8 or via any of the major streaming services.