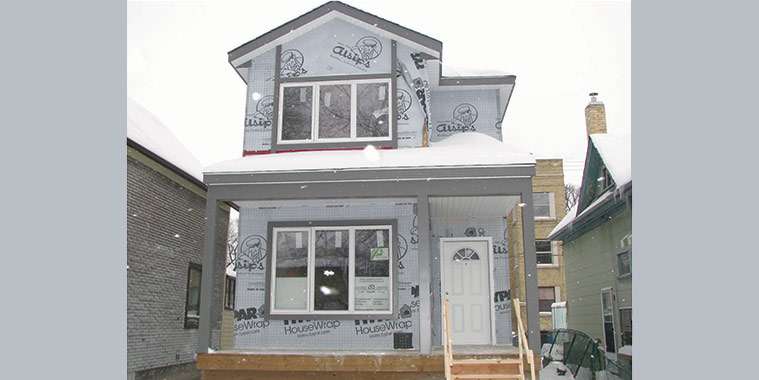 Infill strategy a win-win for neighbourhoods

Infill is not a new concept. You’ve probably noticed new homes being built in established neighbourhoods around the city. What is new is the need to establish a strategy that ensures these infill homes fit in with the existing homes around them, and don’t become a source of discord among their neighbours. From the very outset of the City of Winnipeg’s plan to develop a residential infill strategy, WinnipegREALTORS® has been on board. We’ve embraced the initiative and efforts by the City of Winnipeg and its city planners to create a well-executed strategy, one which will address issues more effectively as they arise. This includes developing a set of well thought out and practical planning and design guidelines — such as the City of Edmonton has done — to create greater clarity among all stakeholders within established neighbourhoods to reduce the likelihood of misunderstandings.

This strategy has been in the works since June 2017, when focus group sessions and a stakeholder workshop were first held, with WinnipegREALTORS® holding its own workshop with city planners that September. The City of Winnipeg also held various community group events in 2017, including in some of the mature neighbourhoods where infill had been occurring (e.g. South Osborne, Spence and Daniel McIntyre).

Without oversimplifying, the intent of the public consultations was to try and reach a better understanding of the issues involved around infill, with the end result being the establishment of a standard for good infill that would address both the residents’ and infill developers’ perspectives. One common concern identified by both developers and residents was uncertainty with the approval process. Many different issues were discussed, including the need for design guidelines to ensure more compatibility and proper scale with the existing homes and character of the neighbourhood.

At the REALTORS® workshop, one point agreed upon was that infill should not be subject to impact fees, with part of the rationale being that infill is utilizing existing infrastructure while increasing the population of the area, which will in turn support local businesses, schools and community facilities.

Another key point raised was the need for consistency in the approval of applications, since without established standards and approved guidelines, decisions are far from uniform and predictable. There was considerable emphasis on creating a better infill approval process to establish clearer communication with residents. It was felt that gaining the trust of residents needs to be a priority in order to build a consensus.

A lot of good suggestions were also brought forward  that went well beyond infill in mature neighbourhoods, including looking at the city as a whole and focusing, for example, around centres, hubs and nodes (e.g. major redevelopment sites should be a focus for infill). And in terms of larger scale infill, the question was asked whether the City of Winnipeg has enough infrastructure capacity to meet the greater intensification of development.

In January 2019, WinnipegREALTORS® presented information to the Standing Committee on Property and Development regarding its position on implementing and finalizing a residential infill strategy, which included design guidelines for the City of Winnipeg. Following are some excerpts from its presentation:

“WinnipegREALTORS® members actively work with clients, builders and developers to develop infill projects in a range and scale of various residential property types, from simple infill of an empty lot to accommodate a single family zoned home right up to major multi-family projects.

“WinnipegREALTORS® has had first-hand experience with residential infill through the set-up of
a stand-alone non-profit housing initiative called Housing Opportunity Partnership — or HOP, as it is commonly referred to since its inception in the late 1990s. HOP has done many infills as part of its
renewal efforts within Winnipeg’s West End neighbourhoods of Daniel McIntyre and Spence. It also did two infill homes in the Centennial neighbourhood, and is now preparing to build five new residential infills in the William Whyte neigbourhood.

“HOP, over its tenure, has shown the critical importance of being very strategic and laser-focused on implementing infill projects in order to create a win-win situation for the neighbourhood, buyers of the homes (who become committed and invested in the community), and the City of Winnipeg, as it gains an increased assessment base in order to be better able to deliver essential city services to its citizens.

“In the case of HOP’s targeted MLS® West End area, which WinnipegREALTORS® can monitor closely with a number of valuable MLS®  metrics, the area at the outset of our renewal effort was in a free-fall, with average house sales prices declining in the late ’90s to $30,000. It literally was on the cusp of irretrievable decline if something was not done to turn it around.

“HOP, on its own accord — through upgrading and refurbishing existing homes initially, and more recently focused exclusively on erecting new infills — completed 87 homes. While not all due to HOP’s considerable effort and positive intervention on streets and blocks requiring housing rejuvenation, as there were other housing restoration initiatives underway, the increase in the average sale price of homes in this MLS® area has gone up over 5-fold to $166,000 at the end of 2018. The average days to sell a home in the area is just 2 days higher than the WinnipegREALTORS® market region average of 30 days.

“In addition, the infill homes HOP has successfully completed and sold to first-time buyers have been well vetted with the neighbourhood associations with considerable effort on ensuring the design of the homes fit within the character and fabric of the community.”

The point being made at this committee hearing is infill housing is critical to renewing Winnipeg’s older housing stock, and creating a more sustainable and livable city for its residents as it continues to welcome new immigrants and accommodate its increasing population. It really becomes a matter of how we need to embrace infill housing as a way to keep our housing affordable, and enhance our property assessment base so core civic services can be delivered in the most cost-effective way.

With a well thought out infill strategy, developers can ensure that their new homes are built with the
cooperation of the existing residents, and the harmony of the neighbourhood remains intact.