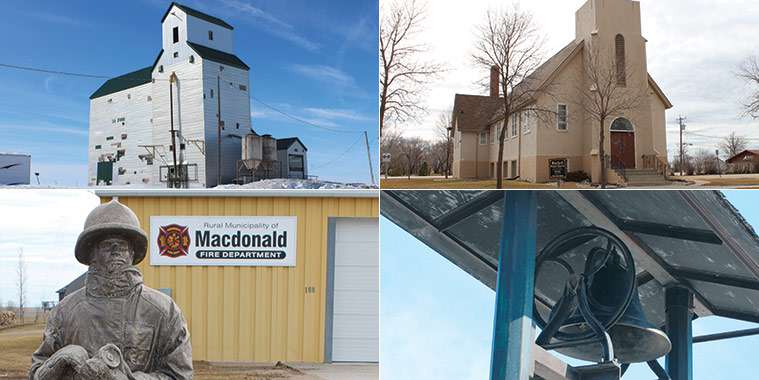 Sanford: the heart of the RM of Macdonald

The hamlet of Sanford, Manitoba, population 850, is located 20 kilometres southwest of Winnipeg. As the administrative centre of the Rural Municipality of Macdonald, it is home to the municipality’s offices, fire department and public works yard.

The area around Sanford was settled in the early 1870s and by the time the CNR’s Carman Subdivision rail line came through in 1901-02 there were two area post offices, Blythefiled and Mandan. The railway, however, opted for a completely different name, Sanford, for its new siding.

The name most likely honours Sen. William E. Sanford who died in 1899. Though based in Hamilton, his clothing manufacturing empire included a large warehouse in Winnipeg and in the 1880s he became one of Manitoba’s largest landowners.

Sanford’s first elevator was constructed along the new rail line in 1902 by the Canadian Elevator Company. The provincial government took it over in 1910 and leased it to United Grain Growers, which bought it out in 1926. Two years later, it was sold again to the Sanford Cooperative Elevator Association and became a Manitoba Pool elevator.

On the afternoon of September 22, 1948, a fire started in the elevator’s cupola and within minutes the structure was engulfed. Fire departments from Carman and Winnipeg were called in to assist local volunteers to prevent the flames and embers from spreading to nearby oil tanks and destroying the town. Hard work and a favourable wind direction saved the day.

The Elevator Association soon began construction on a new elevator. Work was well underway in December 1948 with builders wintering in a nearby bunk house. The elevator went into service in early 1949.

In 1998, after Manitoba Pool’s merger with Alberta Pool, the 3,180-tonne capacity elevator was rebranded as Agricore. It was last used in the 2000 – 2001 crop season and then sold off for private grain storage.

It was demolished in January 2019.

Sanford United Church celebrated its 50th anniversary in 1947 and the congregation began looking to the future and the construction of a new home.

They turned to Winnipeg architect Edgar Prain to design the building. The Scottish trained architect had practiced in Winnipeg since 1910 with dozens of structures, mostly apartments, to his credit.  This commission was one of his last works.

The sod-turning ceremony took place in November 1948. Because much of the work was done by volunteer labour and the congregation fundraised the $20,000 as they went, progress was slow. It wasn’t until October 25, 1953 that the new church officially opened.

The one-storey church sits atop a full basement hall. Its stained-glass windows include one donated by Rodgers family in 1953 and one dedicated to those who fought in World War I which had been a fixture in the previous church.

The Sanford United Church is part of the Meridian Pastoral Charge and shares a pastor with churches in Starbuck and Domain. It still offers weekly services and a Sunday school program.

On the front lawn of the R. M. of Macdonald’s fire hall is a statue that commemorates Alvin Murner, the department’s fire chief from 1974 – 1999.

In the early 1970s, Murner, who grew up in the region, was a resident of Sanford and a City of Winnipeg firefighter. He was also a leading proponent for the establishment of a local fire department.

The Macdonald Fire Department was created by the municipality in 1973 and contracts were let for the construction of the fire hall and the purchase of a pumper truck and other equipment. By the following April everything was in place and Murner was named chief.

After a month of training exercises, Murner’s department was ready for action. Its first official call was to rescue a resident who got stuck on their roof.

The 1.8-metre-tall, 635-kilogram statue was created by Ornamental Stonecraft of Oak Bluff and erected shortly after Murner’s death. It is made of concrete and painted to appear as if it is cast in bronze.

Out front of J. A. Cuddy School is a monument that houses a 200-kilogram bronze bell. The bell was purchased by community members in the Spring of 1915 to adorn Sanford Consolidated School No. 86 which opened the previous year. It was in use until the school’s demolition in 1964.

J. A. Cuddy’s long-time principal, Margaret Erb, appealed to the school board to put the bell on permanent public display for the municipality’s centennial in 1981. The monument and bell were unveiled on August 2nd of that year.