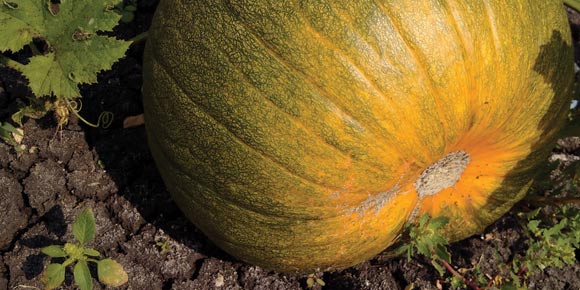 ‘Tis the season for pumpkin growing

It’s Halloween and this year pumpkins may be scarce because of the cold weather. While they don’t mind it chilly, freezing will destroy them. If you have bought pumpkins for carving into jack-o-lanterns this year, hopefully you put them somewhere protected from the frost.

Pumpkins, which originated in South America, are monoecious, meaning a single plant will have both male and female flowers. Female flowers can be pollinated by male flowers on the same plant.

Just like with squash or cucumbers, the male pumpkin flowers appear before female pumpkin flowers. Sometimes new pumpkin growers get confused, because the plant has all male blossoms, and they wonder if the plant is defective or if it is difficult to detect the sex differences. In fact, it is very easy to tell which blossoms are females because they have a noticeable round swelling between the blossom and the vine. If you can’t find your girl flowers, just hang tight a few days; they’ll appear. There are usually ten males for every female.

You can also assist pollination by transferring pollen from the male flowers to the female. The most efficient way to get the job done is to pick a mature male flower (the flower is mature when the pollen comes off easily), pull the petals back, and use the stamen as your swab, dashing pollen onto the stigma of a female flower.

Pumpkin blossoms should be pollinated right after they open, in the morning. They stay open from about 10:30 a.m. to 3 p.m. But for the best pumpkins, wait until there are at least 200 leaves on the vine.

Pumpkins usually produce only one or two full-sized fruits per plant. If you want to grow a giant pumpkin, choose one on the main vine and remove any others. Allow the plant to put all its energy into a single pumpkin. Trim off the others when the pumpkins are about the size of a volleyball.

When it comes to fertilizing, too much nitrogen can delay flower production and fruit sex. Phosphorous promotes more flowers.

Every time you move your growing pumpkin, you risk breaking the vine or stem. Even fairly small cracks in the vine or stem can invite disease. Best to put your pumpkin into a good position before it is too big and then resist moving it until harvest, especially if you are growing a champion-sized fruit.

Leave pumpkins on the vine until colour is fully developed and the shell has hardened. The pumpkin will not continue to mature once it is removed from the vine. If the weather holds, the leaves may die off before you harvest your pumpkin. Protect from light frosts by covering lightly. If a deep freeze is on the way, field time is over for your pumpkin; bring it in. Pumpkins will die after just one or two hours of a frost.

By the way, ever wonder what would happen if you pollinate a pumpkin blossom with zucchini pollen? The fruit will be the kind of pumpkin that you planted. The seeds you get from that pumpkin, however, will produce strange hybrid fruit the next year.

Dorothy Dobbie is the publisher of Manitoba Gardener magazine. She also broadcasts a weekly radio show on CJNU, 93.7FM every Sunday morning at 8:00. If you would like to subscribe to Manitoba Gardener, call 204 940 2700 or go to localgardener.net. It makes a great Christmas gift.