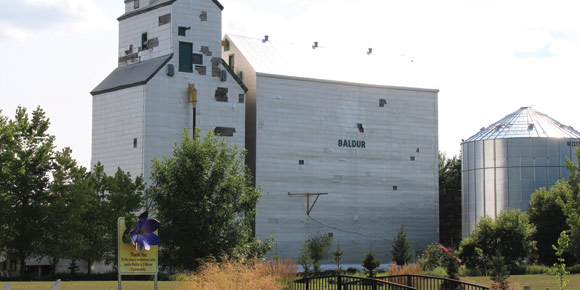 Town of Baldur named after the Norse god of light

Located on Highway 23 in the R.M. of Argyle, the village of Baldur was formally established when the Northern Pacific Railway came through the area in 1889-90. There was much debate about what the townsite should be named. One suggestion, which won by a vote of residents, was ‘Baldur’ after the Norse god of light and purity.

Many of the area’s early settlers were from Iceland, Scotland and England. Some had moved on from smaller farms in Ontario thanks to federal government homesteading programs aimed at settling the West.

Today, Baldur has a population of around 320 people. It has retained several of its historic buildings and boasts a K-12 school, public library and museum.

Alexander “Sandy” Fowler came to Baldur in 1891 to operate the community’s first grain elevator which was built by his father’s company.

Fowler became a tireless supporter of his new home town. He was on the founding committee for the local cemetery, school, ice rink and board of trade. A prominent curler with the local curling club, he was made an honorary life member of the Manitoba Curling Association in 1931.

Around 1895, Fowler bought out a local saddlery and boot shop and in 1899 decided to leave pursue that business full-time and construct a new building to house it.

The architect of the Fowler Block was Walter H. Shillinglaw of Brandon. In his 40-year career, Shillinglaw transformed the early skyline of Brandon and designed dozens of schools, stores and churches for rural communities.

The simple design of this block is made attractive by decorative brickwork on the cornice and above the window openings. It also includes a touch of stone trim which was more apparent in the building’s original form when the ground floor contained floor-to-ceiling display windows.

The building’s foundation stone was laid in June and less than two months later the narrower, eastern section, which housed the saddlery business, was completed. The western section, which was rented out to grocers or dry goods merchants, was finished in October. The second storey was primarily residences, including one for Fowler and his family.

The Baldur Gazette called the Fowler Block: “a building of magnificence and finish of which surpassed our most sanguine expectations.”

Another name long associated with Fowler’s store was Arni Bjornson. He worked as a harness maker for over 50 years, minus two years off to fight in the First World War, and retired in 1964.

The Fowler Block, which still houses a grocery store, was made a municipal heritage site in 1995.

Thomas Poole came to Manitoba from his native Ontario in 1880. He originally settled in Winnipeg and found work with the J. H. Ashdown Hardware Company. In 1889, he and wife, Margaret, headed to Baldur where they set up a hardware business of their own.

Business was good and in 1910 they decided to build a more permanent structure for the store. The architect of the Poole Block is unknown, though they surely took a number of cues from the nearby Fowler Block with its large, main floor display windows, decorative brickwork and stone trim.

The exterior of the building was completed in August 1910, though the store did not open until December.

The Pooles operated the store until 1925 when they sold up and retired back to Winnipeg.

The Poole Block continued to be home to a hardware store for another six decades under the Harris family, then as a Marshall Wells and an Allied Hardware store. In 1997, its run in the hardware business ended and the building was vacated. Later that year it was granted municipal heritage status.

In 1998, the Poole Block reopened as a general store called Kay’s Place until the early 2000s.

In 2008, the community’s Heritage Building Committee purchased the vacant block to meet two community needs: a permanent home for the Argyle Museum and a community fitness facility.

A grain elevator was key to any rural community’s development into a regional service centre.

The first elevator constructed in Baldur was the Manitoba Elevator by W. O. Fowler in 1891. It was soon replaced by a larger structure. At one point in the early 1900s there were as many as three small elevators in operation along the tracks.

In July 1927, a group of 45 area farmers met to finalize an agreement to create the Baldur Co-operative Elevator under the Manitoba Pool banner. The Canadian Elevator Company began construction on the structure in August and it opened in October.

In late 2000 it was announced that the Baldur elevator would close permanently on November 30, 2000 after 73 years of service. Other elevators in the region were also closed which negated the need for rail service along Highway 23. The tracks were pulled up later that decade.

Baldur’s elevator was subsequently sold to a private concern and is now used for grain storage.