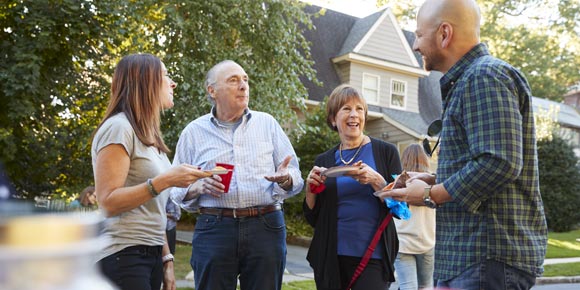 How to meet your neighbours even if you’re an introvert

Want to know the secret of how to meet your neighbours after you’ve moved into a new home? It’s this: Stop waiting for people to swing by with an apple pie. These days you have to be proactive and get out there yourself!

So how do you do that?

Granted, whether you’ve just moved in or lived someplace for eons, many find this simple act of reaching out amazingly hard. If that sounds like you, it’s OK: It’s all about knowing a few icebreakers. Here are a few that even the shyest of shy can try.

This project doubles as decluttering — and works whether you’ve lived in a place for years or just moved in and didn’t get a chance to fully purge before you packed up for your new digs.

“Not only will a garage sale provide you with a clean slate, it’s also a low-key way to meet your neighbours,” says Ali Wenzke, author of “The Art of Happy Moving.” Her advice: Chat with anyone who stops by.

“Even if you don’t make a sale,” she explains, “you might be meeting your new best friend for the first time.”

Ask to borrow something

“We met our neighbours the day after we moved in,” says Julie Bane of Richfield, MN. So what’s her secret? Merely loaning out something a neighbour needed.

“They rang the doorbell and asked to borrow some tools,” Bane explains. “They figured since we just moved in, we’d have them readily available. And we did!”

And remember, this is an equal opportunity endeavor: Sooner or later you’re bound to need something a neighbour might have, from a hammer to cup of sugar. Go ahead and ask — it sure beats schlepping to the store.

Do a good deed

Sometimes the best way to break the ice is to look for a way to pull someone out of it.

Three years ago, during an East Coast polar vortex, Seth Lejeune was leaving his Malvern, PA, home at 4 a.m. to attempt to get to work when he happened to see water gushing out of his neighbour’s garage. No one was home, so Lejeune called the fire department.

“A sprinkler system had burst on the third floor and was destroying their home,” says Lejeune, who stuck around to help out and make sure everything was OK. “We broke into their home and got the water turned off.”

Once his neighbours returned from their vacation, “they were appreciative,” Lejeune says. “And we remain friends to this day.”

Not that you have to wait for disaster to strike, either — offer to shovel the snow out of someone’s driveway or clear the leaves from their gutters. Who could refuse? You’ve got a friend whom, odds are, you can depend on during a pinch, too.

Find a common cause

Last summer a feral cat had a litter of kittens in the yard of Heidi Bender’s Adrian, MI, home. Concerned about their welfare — not to mention the number of cats already roaming her neighbourhood — Bender went door to door to bring the issue to her neighbours’ attention. Ten houses down, she found a neighbour eager to help the free-range cats. Today, cats in their community are well cared for — and these two neighbours are fast friends.

“When you work together toward something that matters to you, you can’t help but bond,” says Wenzke.

Don’t have a passionate cause of your own? Then get involved in an HOA or local community group.

“Volunteering is one of the best ways to get to know people because you move past the small talk,” says Wenzke.

During the first Halloween in his Phoenix home, Dave Forman landed on a genius idea to connect with his neighbours.

“We put two frozen margarita machines on our driveway,” he says. “One was nonalcoholic for the kids, and the other was for adults.”

No surprise, adds Forman, “we met the entire neighbourhood in one evening.” Margaritas do that.

So maybe you want to be part of your community but work crazy hours. Or you’re always shuttling your kids from Girl Scouts to lacrosse and your schedule looks like that of an air traffic controller. Maybe your nearest neighbour is a mile (or more) away. If meeting your neighbours IRL is a challenge, then maybe you do need to pick up that tablet or smartphone and join a local online network such as Nextdoor.

Think of it as Facebook for those who live nearby—where you can meet and greet newcomers, ask questions, and more.

Plus, adds Steve Wymer, vice president of policy and communications at Nextdoor, “we take great pride in hearing stories about how these friendly online collisions wind up leading to offline interactions.”

You hear that? Your iPhone addiction actually can lead to meaningful connections outside your front door.