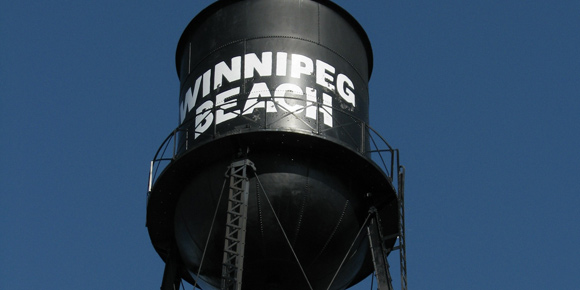 The history of Winnipeg Beach

Winnipeg Beach was founded in 1900 by a scouting party that included William Whyte, the CPR’s General Manager for Western Canada. They were searching for a location at which to build a beachside tourist resort that would generate enough passenger traffic to help subsidize the railway’s proposed cargo rail line to the Interlake.

Regular train service to Winnipeg Beach began in 1903 and the resort, with its amusement park, grand hotel and “Western Canada’s finest dance hall”, was an immediate hit with Winnipeggers.

As the popularity of Winnipeg Beach grew, so did the number and size of trains needed to bring in tourists. In 1928, for instance, at the summer peak there were four round-trip trains per day on weekdays and eight on weekends.

The locomotives required a lot of water to create the steam that powered them. Though they had a capacity of tens of thousands of litres, water was constantly being lost along the journey and their tanks required topping up. To meet this need the CPR procured a new water tower for Winnipeg Beach in 1928.

Built by Vulcan Iron Works of Winnipeg, the 91,000-litre water tank stands upon a skeletal tower. The total height of the structure is 40-metres.

The CPR sold its assets to a private concern in the early 1950s and the tower went out of service when the amusement park closed in 1964. Gradually, permanent signs of the CPR resort’s presence disappeared until all that was left was the tower.

There have been many ideas over the years for a more active use for the water tower.

The first came in a 1968 multi-year community plan that called for it to be turned into a public observation tower with stairs to a lower deck at the 10-metre level and a spiral staircase that would take people up to the platform at the base of the tank’s structure.

That idea, and subsequent ones, never panned out.

In November 1997, Winnipeg Beach’s town council made an application to the province to have the structure designated a provincial heritage site.

In order to access a heritage grant that would allow them to refurbish the tower, it could not be on provincial land.  Council passed a motion to buy the tower from the province for one dollar. Councillor, now mayor, Tony Pimentel donated the loonie.

Heritage status was granted in June 1998. The provincial heritage department notes not only the tower’s connection to the resort that it once served, but that it is just one of five riveted-tank water towers known to still exist in the province.

The daily passenger train service that once brought thousands of people to Winnipeg Beach each week began to decline in 1957 after the CPR cancelled the “Moonlight Express” weekend evening trains. In 1961, citing a lack of customers, all passenger service was discontinued.

In January 1989, Al McLean, the town’s deputy mayor, requested from the CPR a donation of a caboose for use as a tourist information centre and a reminder of the community’s railway heritage.

Later that year, CP 437010, a wooden, end cupola caboose built in 1942 rolled into town. It was placed on the site where the community’s train station once stood, (the station was sold off to a private buyer and hauled away in 1964).

The caboose served as Winnipeg Beach’s seasonal tourist information booth for about a decade but in recent years has sat empty.

In the summer of 2018 work began on refurbishing the caboose inside and out. Work includes repainting the interior and installing an accessible deck and seating area adjacent to it.

When completed, the caboose will again services as the town’s tourist information centre.

Anishinaabe was carved by artist Peter “Wolf” Toth and is part of his continent-wide series Trail of the Whispering Giants.

Born in Hungary in 1947, Toth’s family fled the Hungarian uprising of 1956 and eventually settled in the U.S.

Toth became interested in Indigenous North American culture and carved his first larger-than-life sculpture of an Indigenous man’s head in California in 1972. After carving a second, he decided to create at least one in all fifty U.S. states.

Toth’s first of two Canadian statues was erected in North Bay, Ontario in 1988. In 1991, he came to Winnipeg Beach and spent three months carving Anishinaabe. The 9.1-metre tall work was created from a 1.8-metre thick cedar log from Campbell River, British Columbia.

The statue was unveiled at a ceremony on Canada Day 1992, (not in September 1991 as the plaque under the statue reads.) Officials at the ceremony included Chief Phil Fontaine, Chief Louis Stevenson of the Peguis First Nation and Winnipeg Beach Mayor Jim Tomko. Toth was unable to attend.

Anishinaabe was Toth’s 67th statue in a series of 73.