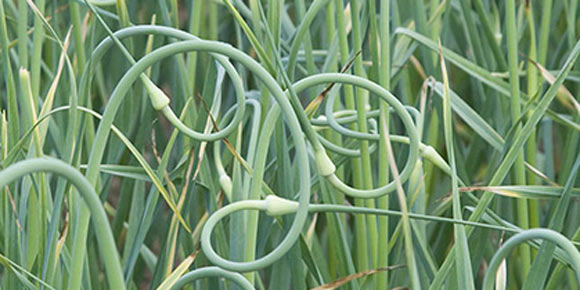 Garlic repels vampires and other bloodsuckers

Fall is garlic planting time in Manitoba and it’s well worth the effort, both from a foodie and an ornamental gardener perspective.

There are two popular types of eating garlic: hardneck and softneck. Hardneck garlic is the kind that produces tall, coiling scapes (stems) and is very ornamental. It forms bulbils in the scape that can be harvested for seed (or eating, although they are small) or removed to allow the energy to go into the underground bulb.  ‘Rocambole’ is a hardneck variety that produces seven to eight cloves to a bulb on a lovely coiling scape.

‘Silverskin’ is a softneck variety with no tall scape and 12 to 15 cloves per bulb. ‘Porcelain’ grows six feet tall with large bulbs of four cloves.

In most of Canada, garlic is planted in fall for two reasons: firstly, it needs a chilling period; and secondly, it takes nine months to mature. Plant it in August or September depending on the seasonal conditions — just don’t plant it so early that it begins sprouting. Like tulips, you want garlic to put out roots but not to send up shoots before the ground freezes. Mulch it in with some straw or peat moss after freeze up. Plant it in a well-composted soil and keep the garlic patch weed-free. It resents competition.

In planting from bulbs, you need to separate the cloves from the bulb (this is called “cracking”) and plant them, pointy side up, about eight to 10 inches apart and one to three inches deep, depending on the size of the clove. Be sure to leave the skin on the clove to protect it from infection and from insects. Larger bulbs and larger cloves will produce larger garlic plants and bulbs. A dressing of alfalfa meal or well-cured manure will benefit the bulbs. Give the leaves an occasional foliar spray of seaweed tea.

In August, you may see some of the strappy leaves beginning to go yellow. This is not a sign that you should increase watering. Rather, it means, slow or stop watering and get ready to harvest about the time you see three to four of the leaves turning yellow. If you leave the bulbs in the ground too long, they will begin to separate and split out of their casing.

Lift the bulbs from the soil carefully. If you have planted in well-composted, well-draining soil, this should not be hard. Do not wash. Allow the soil to dry out, after which it can be easily brushed away. Let the bulbs, with their scapes still in place, dry out for three or four days then, while the leaves are still flexible, braid them together. Allow them to continue curing for two weeks, then store them in a cool dry space – not in the refrigerator.

In mythology, garlic is considered an effective vampire deterrent, maybe because vampires are blood suckers as are mosquitoes and mosquitoes are repelled by garlic. Garlic is also an anti-bacterial agent that “poisons the blood” of those who eat it. Garlic is known as the stinking rose and vampires hate the smell. It can burn your skin if you are a vampire (also, if you are not, but are sensitive). If you kill a vampire, be sure to stuff its mouth and eyes with garlic to keep it from coming back.

Does garlic really keep mosquitoes at bay? Apparently it works on some mosquitoes, but not all. There are extra strong commercial concoctions you can use to spray in the vicinity of your patio – if you can take the smell.

Never store garlic in oil at room temperature as it is a breeding ground for botulism because of its sulfuric nature. You can store it in the refrigerator, but use it within a week. Too much garlic should also be avoided if you are being treated for HIV/AIDS or if you are taking blood thinners such as warfarin. Do not feed it to your dog. In large amounts, it is toxic to dogs.

In spite of all those warnings, garlic is actually very useful and can be very beneficial to your health – just don’t overdo it. One ounce contains 42 calories and 25 per cent of your daily manganese requirements, among other good things. It reduces blood pressure, lowers LDL (the bad cholesterol), but has no impact on HDL (the good one). It is filled with anti-oxidants and has been linked to positive effects on Alzheimer’s. It will detoxify heavy metals from your body, is good for bone health and it is said to improve athletic performance.