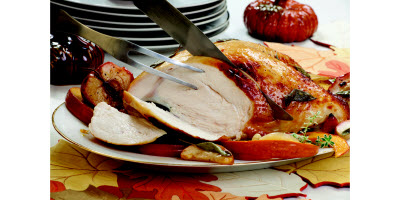 Roasting a Thanksgiving Day turkey with stuffing and gravy

Melt butter in a large skillet. Add onions and celery; cook, stirring until tender (about five minutes). Pour over bread in a large bowl. Add seasonings; stir until well combined. Gradually stir in broth until just moistened, but not wet. Stuff turkey or place in casserole dish and bake.

• Oyster: Add 1 cup (250 mL) whole or chopped cooked oysters to bread mixture. Oyster broth may be substituted for all or part of the chicken broth.

• Avoid packing the stuffing since it expands while cooking.

• Do not stuff a fresh turkey before freezing and do not freeze a cooked turkey with stuffing still inside.

• Remove leftover stuffing from turkey immediately and keep covered in the refrigerator. Use within three days. Reheat just enough stuffing for one meal.

• Cooked stuffing can be frozen up to four weeks. Heat without thawing (or thaw in the refrigerator first): use at once.

• Save cooking time: place stuffing in covered baking dish; cook during last half hour of the turkey roasting time.

• If stuffing the turkey, do so while the oven is preheating. Spoon stuffing lightly into turkey instead of packing firmly because stuffing expands while cooking. Allow half cup (125 millilitres) of stuffing per pound (500 grams) of turkey.

• Place turkey breast-up on a rack in a shallow roasting pan.

• Insert meat thermometer in the thickest part of the inner thigh, but not touching the bone.

• Roast uncovered, or loosely covered with foil. If you choose to baste your turkey, limit the number of times you open and close your oven (once per hour is sufficient).

• Remove the turkey from the oven when cooking is completed and let stand 15 to 20 minutes to allow the juices to set.

Before you start your gravy, read the recipes in their entirety and decide which method you want to employ.

1 medium onion, trimmed but not peeled, cut into quarters

Salt and pepper to taste

Place the giblets and neck in a small, shallow roasting pan and cook at 350°F for about 20 minutes, until browned.

The other method involves placing the giblets and neck in a large saucepan and saute in one tablespoon of oil on the stovetop using medium-high heat. Brown the giblets and neck for five minutes, then saute a medium chopped onion for about three minutes. Cover and cook for another 20 minutes over low heat with two sprigs of fresh thyme and eight parsley stems.

For the roasting pan method, after cooking the giblets and neck in the oven, transfer to a saucepan with the chicken broth, vegetables, bay leaf and peppercorns, and simmer on stovetop about two hours. Strain, discarding the solids.

Be careful when use store-bought broth because it may have a high salt content. Check the various brands out and opt for the one best suited to your needs. Remember, a low-sodium label means less salt.

If you have opted for the stovetop method of browning the turkey neck and giblets, add the chicken broth, simmer and then strain out the solids.

The next step when using the roast method is to place the roasting pan on the stove, add the butter and melt over medium heat, scraping the pan. Whisk in the flour and cook, stirring until the mixture browns lightly in about five minutes. Add the strained stock and cook 10 minutes more, until lightly thickened. Cover and refrigerate for up to two days, until just before serving time.

The stovetop method diverges slightly from the roasting pan method discussed immediately above. For example, the roux is made in the saucepan after the solids have been strained out and only a liquid remains. Reserve the resulting stock in a bowl until required. Melt three tablespoons of butter in the saucepan over medium-low heat and gradually stir (a whisk is the best tool) in 1/4 cup of all-purpose flour, stirring constantly until a nutty brown — about 10 to 15 minutes. Add the stock from the bowl to the roux and whisk to avoid creating lumps. Simmer until thickened — about 30 minutes — and remove any scum that forms on top. Set aside the resulting liquid until the turkey is cooked.

For both methods, when the turkey has cooked, remove it from the pan and pour the drippings into a large glass measuring cup. Spoon off and discard the fat that rises to the top. There are also fat separation containers available at retail outlets that perform this task.

The variation involving the saucepan method is that the vegetables are browned in the oven with the turkey — one cup each chopped onions, carrots and celery, so when the drippings are transferred to a measuring cup, the vegetables have to be strained out; otherwise, the procedure below remains the same for the last stages of creating a gravy.

Return the drippings to the roasting pan, place it across two burners over high heat and bring to a boil, scraping the pan with a wooden spoon to incorporate the favourful brown bits at the bottom of the roasting pan. Add the stock mixture and bring it back to a boil.

Reduce the heat and simmer, stirring often, until thickened. Season with salt and pepper to taste. If there are any lumps, strain through a sieve.