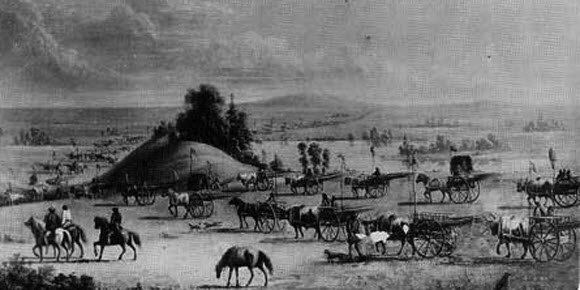 The fight for free trade

In order to keep Norman W. Kittson from buying furs from Assiniboia residents at his Pembina post, the Hudson’s Bay Company (HBC, or simply the Company) obtained an American trading licence — somewhat fraudulently with the complicity of the chief agent of the American Fur Trade Company, Henry Sibley — and set up a post next to Kittson’s, which was operated by a man named Fisher. Kittson knew and resented the fact that Fisher was an HBC employee operating on American soil.

In 1847, Christie brought suit in the Red River Settlement’s General Quarterly Court against Kittson for trading furs in the Company’s territory.

“From this man (Christie),” wrote Kittson to Sibley, “I have received nothing but insults since our establishing of a post at this place and now he has added persecution.”

The dispute seems to have ended amicably, with Kittson saying Christie was lessening his antagonism. In turn, Kittson appears to have proposed that the 49th Parallel become a true line of demarcation between their trading interests (Norman W. Kittson, A Fur-Trader at Pembina, Minnesota History, by Clarence W. Rife).

But the amicable relationship soon took a turn for the worse. When Kittson went to Fort Garry to confer with Christie, the governor was absent. As a result, instead of coming to terms with the HBC, the American trader rekindled his relationships with fur hunters, arranging for them to bring their pelts to him at Pembina. As a consequence, Christie and the HBC redoubled its efforts to put Kittson out of business.

The trade war had ramifications for independent traders in Red River, such as Andrew McDermot, who had been given a private fur trade licence by his friend, Sir George Simpson. The governor of Rupert’s Land believed granting favours to McDermot and a couple of other Red River-based traders would help to mitigate the adverse effects upon the Company’s fur trade posed by Americans such as Kittson.

In a December 7, 1844, proclamation, which had been devised primarily by Recorder (judge) of Rupert’s Land Adam Thom, Christie stated that Company ships would not receive, at any port, goods addressed to anyone unless that person lodged at the Company’s office at Upper Fort Garry a declaration to the effect that he had neither directly or indirectly trafficked in furs (The Quality of Friendship: Andrew McDermot and George Simpson, by Brian Richardson, Manitoba History, Autumn/Winter 2003-04).

The HBC also began to censor mail travelling on its ships. According to the proclamation, letters were to be delivered unsealed to Fort Garry so that they could be inspected by HBC officials before being dispatched. “If importers would sign a declaration that they were not trading in furs, they were not obliged to comply with this regulation” (The Story of Manitoba, Vol. 1, by Frank Schofield).

Understandably, the letter regulation was strongly objected to by the merchants of Red River. Although Thom argued for its continuation, the HBC committee in London took the side of the merchants and rescinded the regulation.

Furthermore, Thom devised a scheme that the Company would only pay for furs with a new currency that could only be used to purchase goods at HBC posts and could not be used in the U.S.

Another aspect of the crackdown on illicit fur trading was that the HBC began to search cart-trains, homes and businesses for furs, confiscating any that they found.

“Your ships, your courts and your currency render you absolute,” Thom promised Christie, which turned out not to the case.

In fact, smuggling only intensified in reaction to the new regulations. Respectable traders, such as Peter Garrioch, came to the conclusion that if they were to be treated as smugglers, they might as well become smugglers. Garrioch then smuggled a collection of Sinclair’s furs to Kittson at Pembina.

The result of Christie’s petition was that McDermot was unable to receive or send goods via the annual HBC ship.

In addition, the overland shipping contracts of McDermot and James Sinclair that they held with the HBC were cancelled in 1845.

The Company suspected that McDermot and Sinclair were trading furs to Kittson at Pembina. In the case of Sinclair, this was undoubtedly true, as he and Kittson had formed a long-term friendship to their mutual benefit. In 1844, Kittson had arranged to supply goods to Sinclair, who previously obtained them for the HBC. There was even a suggestion that Sinclair operate Kittson’s Pembina post, but that didn’t happen.

McDermot approached Simpson about his licence being revoked, but the governor of Rupert’s Land said his hands were tied, since Christie had convinced the London-based HBC committee to allow his actions.

Subsequently, McDermot withdrew his membership from the Council of Assiniboia.

On August 29, 1845, Jean-Baptiste Wilkie and a group of men, among whom were James Sinclair, Baptiste La Roque, Thomas Logan, John Drew, John Dease and Alexis Goulet, asserted in a letter to Christie that it was “their very strong belief that we, as natives of this country,” had  the right to hunt furs in HBC territory and sell those furs to the highest bidder (Métis and the Medicine Line: Creating a Border and Dividing a People, by Michel Hogue).

The 14 clauses of the letter were disputed by Christie, who took no action to address the concerns expressed. As a result, the letter was another salvo in the continuing protests against the HBC fur trade monopoly.

Also in 1845, the Métis dissatisfaction was tempting many of their numbers to relocate to Pembina, especially after a Métis hunting brigade was allowed to establish themselves on American soil by a U.S. Army officer.

At the same time, Captain Edwin Sumner met a group from Red River along the shore of Devil’s Lake and warned them that they would no longer be allowed to cross the border to conduct their buffalo hunts on Dakota land.

The Métis plead their case with Sumner, saying the hunt was essential to feed their families (they didn’t mention that they also sold robes and pemmican to Kittson) and their Indigenous parentage gave them the right to hunt on both sides of the international border.

Sumner relented. He then suggested sending a petition to the U.S. government. The resulting petition found its way to the War Department and languished without any action being taken; thus,  the Red River Métis continued their annual hunt in the U.S. until the buffalo were gone years later.

Still, many Métis from Red River opted to join the exodus to Pembina, which swelled the population from a handful of residents in 1844 to 1,135 people by 1850 (U.S. Census).

Despite losing his licence, McDermot and other merchants prospered as a result of several companies of the 6th Royal Regiment of Foot arriving in Red River in September 1846. Technically, the 16 officer and 310 member rank-and-file force was sent to protect the settlement from a potential American invasion, arising from a dispute between the British and U.S. governments over the Oregon Territory. The Red River Settlement was also being considered as a launching pad for a British invasion of the Great Plains in the U.S., if war between the two nations broke out, a proposal Simpson made to the British government at the request of HBC Governor John Pelly.

On the other hand, many in Red River believed by inference that the 6th was sent to enforce the HBC fur trade monopoly. In fact, Simpson said as much in a October 24, 1845, letter to Pelly, when asking for a military presence in Red River. He wrote that besides protection from the Americans, a military force was needed to maintain the Company’s trade and enforce its laws.

In his book, The Red River Settlement, Alexander Ross wrote that the troops were a boon to the colony in terms of hard currency the settlement lacked. At the time, barter was the prevailing economy of Red River.

“During their short stay (they left in 1848), the circulation of money was increased by no less a sum than £15,000 sterling.” It was money that benefitted merchants, such as McDermot, who provided goods to the 6th.

“On the departure of the 6th, in the same autumn, arrived a motley squad of some seventy (Chelsea) pensioners ...,” who were under the command of Major William Caldwell. He was also made Governor of Assiniboia by the HBC.

Ross wrote that the pensioners, all paid by the HBC, were an unruly bunch, and “all the authorities, civil and military, in the colony, could not keep them within the bounds of order.”

Essentially, they were HBC-paid agents of disorder in the settlement.

By 1847, McDermot was back on the council after receiving some compensation for the loss of his trading licence. Once again, he could ship and receive goods using HBC ships.

But to protect their monopoly, the HBC continued to harass Red River traders caught selling pelts to the Americans.

On February 17, 1847, Father Georges-Antoine Belcourt prepared a petition at the request of the Métis, asking Queen Victoria to address their grievances with the Company and confirm they were not bound by the HBC charter, since they were the descendents of Indigenous people and had the right to freely cross the international border and trade with whomever they wanted. The petition bore the signatures of 977 Métis residents of Red River.