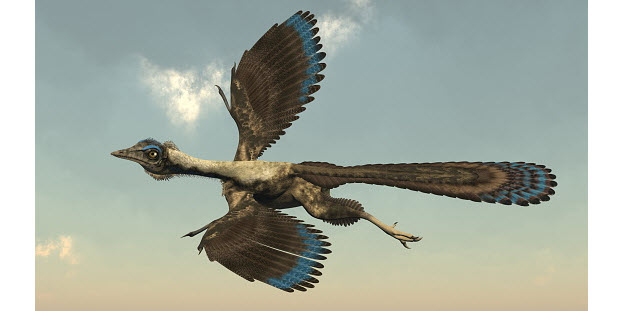 If you’re having turkey as the main course of your Thanksgiving Day meal, you’re gobbling down a dinosaur; that is, a descendant of the dinosaurs that supposedly vanished from the earth 65 million years ago. Today, it’s understood that birds evolved from dinosaurs, as the evidence has become too overwhelming to dispute. In fact, birds are referred to as avian-dinosaurs, so not all dinos went extinct.

The ancestors of birds were two-legged carnivorous dinosaurs called theropods, which had many traits now commonly found in birds. T. Rex, the mightiest of carnivorous dinosaurs, also belonged to this family of reptiles. Coelurosauria, from Greek, meaning “hollow tailed lizards,” is the clade containing all theropod dinosaurs more closely related to birds than to carnosaurs — large meat-eaters, including the allosaurs. The “dino-birds” transformed into true birds over the course of millions of years, and once they became birds rapidly transformed into the multitude of agile fliers filling the sky to this day, as well as the flightless birds, such as penguins, kiwis, ostriches and emus.

The theropods are exemplified by the terrifying raptors made infamous in the Jurassic Park films. But not shown in the films is that raptors possessed feathers, whether just a dino-fuzz or dino-feathers. Feathers evolved from scales well before dino-birds (referred to as maniraptora) actually took to the air. Why feathers evolved has been a matter of speculation, but theories commonly put forth are that they were used as insulation against the cold (birds fluff up their feathers when it gets cold) or for mating displays similar to today’s peacock or a strutting tom turkey. Whatever the need, feathers had another useful feature — in the right configuration, they could be used to fly. It can be said that birds are simply a combination of some already evolved traits found in their oddball dinosaur ancestors.

According to an article in the Current Biology journal, the dinosaur forbearers of birds evolved avian traits almost as soon as the first dinosaurs appeared on the earth some 230 million years ago.

“Covered in feathers around its body and sporting a quartet of long, ribbonlike feathers with barbs arranged in vanes, pigeon-sized Epidexpteryx may provide the earliest evidence of a dinosaur flaunting feathers for display” (National Geographic magazine, Birds Evolved From Dinosaurs Slowly — Then Took Off, by Dan Vergano, September 25, 2014).

Maniraptora (“seizing hands”) are united by the possession of modified elements in the wrist that allow it to twist — along with other modifications of the forelimb, both of which makes the flight stroke in birds possible (University of Berkley). Other characteristics present in typical maniraptorans include a fused collar bone (think of a turkey’s wishbone) and breast bone (acts as a keel for flight muscles in birds), a pubis (part of the pelvis) that points downwards rather than forward, a shortened and stiffened tail, long arms and a hand which is larger than the foot, as well as large eyes to see in 3-D to avoid branches and snatch up prey. It should also be noted that birds, like raptors, lay eggs that are similarily shaped.

The idea that birds evolved from dinosaurs is far from new. Thomas Henry Huxley, a renowned English anatomist, who defended Charles Darwin and his theory of evolution, in a 1870 thesis saw no great difference between the bone structure of turkey-sized dinosaur Compsognathus and Archaeopteryx, the feathered bird with a dinosaur-like long tail, teeth and claws discovered in Germany and dated back to 145 million years ago. Huxley looked at modern birds, such as ostriches, and saw small dinosaurs. If a baby chicken’s legs were elongated and fossilized, he said, “there would be nothing in their characters to prevent us from referring to them as Dinosauria.”

While Huxley didn’t doubt the association between dinosaurs and birds, it wasn’t until decades later that a consensus was emerging about their relationship. Deinonychus, or “terrible claw,” a theropod predator named after the sickle-shaped talon on each hind foot, was discovered in Montana in the 1960s, and stood nearly three metres from head to tail. Its bone structure was similar to that of Archaeopteryx (Smithsonian Magazine, Dinosaurs’ Living Descendants, by Richard Stone, December 2010). “Soon scientists were gathering other intriguing physical evidence, finding that fused clavicles were common in dinosaurs after all. Deinonychus and Velociraptor bones had air pockets and flexible wrist joints. Dinosaur traits were looking more bird-like all the time.”

What the theropods needed to become birds was to get smaller. Then the tiny feathered theropods could climb trees to chase insects or lizards, where they could evolve to leap and glide — or even fly.

A research team, led by Michael Lee of the South Australian Museum in Adelaide, reported in Science magazine that bird ancestors decreased in weight from about 163 kilograms to 0.8 kilograms over 50 million years to reach the crow-sized Archaeopteryx. According to the study, the miniaturization was accompanied by the steady acquisition of traits that are characteristics of birds today.

The most significant fossil finds associated with flight have been uncovered in China — feathered dinosaurs capable of some form of flying as well as true birds. In the past 15 years, thousands of exquisitely preserved fossil birds have been found in the ancient lake bed, called the Yixian Formation, as well as new dinosaur species.

“As a result, China has been the key to solving one of the biggest questions in dinosaur science in the past 150 years: the real relationship between birds and dinosaurs...” (Stone, Smithsonian Magazine). “The fossils have finally confirmed, to all but a few skeptics, that birds descended from dinosaurs and are the living representatives of a dinosaur lineage called the Maniraptors.”

Among the fossils found was the four-winged dinosaur, Microraptor, which had long feathers on its arms and legs. Chinese scientist Xu Xing said the tiny dinosaur was capable of gliding from tree to tree and may have even been able to fly better than Archaeopteryx, which may have only been able to fly somewhat awkwardly. Xu recently discovered a new species of four-winged dinosaur, Anchiornis huxleyi (after Thomas Huxley), that was millions of years older than Archaeopteryx, which eliminated the final objection to the evolutionary link between dinosaurs and birds; that is, no flying feathered dinosaurs had been found dating before the earliest known bird. But four-winged dinosaurs were an evolutionary deadend and disappeared, although two-winged birds did survive the mass extinction that killed off all the other dinosaurs.

An amusing cartoon by Zachweiner (website SMBC ) puts the dinosaur to bird transition into perspective. In the cartoon, a family is gathered around a table with a roast turkey on a platter. The father of the family, when giving the Thanksgiving prayer, says, “And we wish to thank evolution for slowly turning some species of dinosaur into a walking ball of meat with a tiny head.”