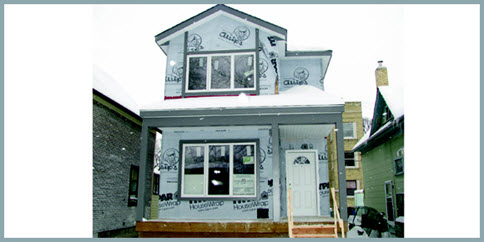 HOP and a national housing strategy

With all that is happening around the recent federal government announcement to tighten mortgage rules (i.e. as of October 17, any insured new mortgage must meet the stress test of qualifying for the Bank of Canada five-year fixed term rate of 4.64 per cent) and national media headline stories about soaring real estate prices in Vancouver and Toronto, most Canadians are not aware of the current Let’s Talk Housing process underway to shape a National Housing Strategy.

Winnipeg South MP Terry Duguid, Parliamentary Secretary to the Jean-Yves Duclos, Minister of Families, Children and Social Development, and Minister responsible for CMHC, this week held a roundtable consultation on the National Housing Strategy in Winnipeg. Duclos is asking Canadians to weigh in on what they think the federal government can and should do to make housing more accessible and affordable to Canadians. He said that “housing is a cornerstone of building sustainable, inclusive communities and a stronger Canadian economy where we can all thrive.”

At the same time, he recognizes that we need to do things differently if we are going to be more successful in dealing with better strategies to end homelessness, provide decent housing for indigenous Canadians on and off reserves, help first-time buyers achieve the dream of homeownership, and examine how we need to find financial incentives and levers to encourage needed retrofitting of our older rental housing stock and spur on the creation of new rental units to address housing record numbers of newcomers arriving in Canada.

It’s a lofty order, for sure, and one that all Canadians should be interested in hearing about. On November 22, the National Housing Strategy report will be posted and results discussed in an online town hall. It purposely coincides with celebrating and recognizing National Housing Day.

One approach that WinnipegREALTORS® intends to share with the federal government is the success it has had in using homeownership as a means of revitalizing a neighbourhood on the cusp of serious decline. The non-profit housing initiative called Housing Opportunity Partnership (HOP) began in earnest in 1997 when the former federal government HRDC department contributed $500,000 to HOP over a three-year period as part of a Winnipeg Development Agreement home equity program. The provincial government also agreed to allow interest earned from real estate broker accounts to go towards HOP in order to support neighbourhood renewal.

WinnipegREALTORS® also contributed $25,000 in seed money to get HOP up and running. Ninety homes later, this nimble operation has been instrumental in rejuvenating Winnipeg’s West End neighbourhood by offering low to moderate income buyers assistance and the opportunity to achieve homeownership. The average house price went from under $30,000 — when HOP started its strategic acquisition of badly-deteriorating homes to completely refurbish and eventually do new infill homes — to over $150,000 today. The neighbourhood is far more stable and MLS® metrics fall more in line with other Winnipeg neighbourhoods.

While HOP has been a major transformative agent and catalyst in bringing renewal and hope to Winnipeg’s West End neighbourhoods that were on the cusp of irreversible decline, it owes much of its success to realizing at the outset that it needed to bring the best partners to the table. The federal government was a key partner in helping fund HOP. In addition, credit also goes to the supportive role HRDC played in its formative years and having CMHC as an ex-officio member on HOP’s board of directors. To this day, CMHC is still involved and HOP is proud of making Canada’s federal housing agency a participating player in its success.

Over the years, HOP representatives have spoken at national housing conferences and done webinars to motivate others across the country to create affordable homeownership opportunities. One clear advantage HOP has over some other non-profit housing initiatives is that it has a pulse on the intricacies and dynamics of the local housing market as a result of REALTORS® direct involvement.

While HOP and WinnipegREALTORS® knows that governments, in general, need to focus on providing affordable rental accommodations for those most in need, all other housing cannot be ignored.

By providing someone with a hand up into homeownership, affordable rental units are also freed up for those not able to, nor interested in, becoming home owners.

The other key aspect of HOP is its essential role in stabilizing neighbourhoods. A new homeowner has a clear stake in maintaining their equity-building investment and, therefore, will take more interest in ensuring the neighbourhod is welcoming and stable. Renewal begets more renewal as existing homeowners are given new hope and incentive to take care of their home. Momentum builds and becomes a catalyst for former detractors of the area to consider it as a place to live.