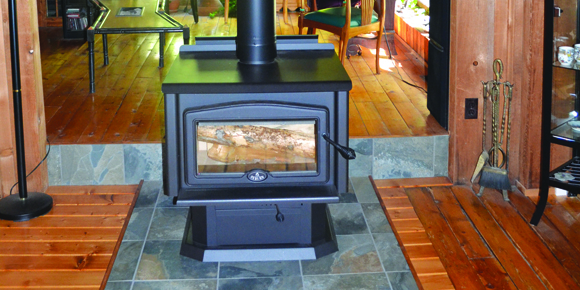 Purchasing and installing an indoor chimney for a wood-burning appliance

It is time to consider a chimney for your new wood-burning appliance. As I have written a previous article about stainless steel outdoor chimneys (Real Estate News, February 5, 2016), I will mainly address the topic of interior black pipe double wall (DW) and single wall (SW) chimneys and the fittings required to attach them safely to wood burners and to outside chimneys. I will also include some information about clearances from combustibles for DW and SW chimneys required by the 2010 National Building Code.

Nowadays, it is good practice to install DW interior black pipe in place of traditional SW pipe. This is not mandated by fire code, but DW will outlast SW by many years, especially when a wood stove is used daily. Moreover, the space between the walls of DW pipe stops the exterior metal from reaching dangerous levels of heat that could cause a fire.

DW pipe sells for about $45 per foot and can be installed closer to combustible material than SW pipe. (Be aware that it is against fire code to run either type of pipe through a ceiling or wall.)

To hook up my new stove to an existing 10-inch OD steel pipe, which extends about 12-inches below my home’s cathedral ceiling, I required a 68-inch length of telescopic DW pipe ($240), a six-inch DW chimney adapter with trim ($63) and a six-inch DW stove adapter ($53). Pricey, I admit. But when it comes to heating with wood, it’s better to install the best parts available rather than save a few bucks by using SW material and then regret your decision later.

Telescopic DW also makes it easy to connect interior pipe to the base of an outdoor chimney with a screw mounted adapter. Once connected, the telescopic DW can be slid downward and attached to the stove adapter, eliminating the need to cut a length of SW pipe(s) to span the distance from the stove’s collar to the outdoor chimney’s base at the ceiling.

Another plus for telescopic chimney is that it can be inspected by unloosening three screws and pushing the pipe upward to allow easy inspection of the inside of the chimney.

Most new wood-burning appliances are equipped with a chimney collar located on the top of the stove. My Osburn 2400 has this useful feature, which allows indoor chimneys to run straight upward to a ceiling connector without need of elbows. This is an ideal set up because elbows interfere with the flow of hot air and particulates from the stove, resulting in a build up of creosote and soot inside the chimney. Creosote is the No.1 cause of dangerous chimney fires.

On some wood burners, the outlet collar is attached to the back of the appliance, requiring a 90-degree elbow to run the chimney vertically upward to a ceiling connector. If your chimney exhausts through an exterior wall, another 90-degree elbow is needed to attach the DW pipe to the stainless steel pipe that enters and exits through the wall.

Keep in mind that only two interior 90-degree elbows are recommended, though many stove manufacturers say two 45-degree elbows are preferable to a single 90-degree at the point where the interior and exterior chimneys connect. Two 45-elbows allow for a less abrupt shift in the flow of hot air, with the result that creosote and other matter is exhausted more efficiently through the chimney and, therefore, is less likely to clog the pipe’s interior, creating a fire hazard.

All pipe seams and connectors should be secured with at least three black sheet metal screws. A 1/8-inch bit is required to drill pilot holes.

Heat or radiation shields can be built and installed by DIYers before or after interior chimneys are in place. The shields reduce clearance requirements by protecting combustible surfaces from excessive heat. Depending on the material used for a shield, clearances can be reduced by 50 to 67 per cent. For DIYers, the most attractive and efficient heat shield can be built of ceramic tile on cement board with a minimum 0.61-mm sheet metal backing. The shield must be spaced out one-inch from a wall or ceiling with non-combustible spacers made of metal conduit or other suitable material.

Though the inside diameter of most residential stainless steel chimneys has remained at six-inches, the outside diameter has been increased to 10-inches from eight-inches. (One exception is eight-inch outdoor chimney that meets the ULC S26M standard.) Extra insulation inside a 10-inch pipe’s walls prevents radiant heat inside the flue from moving to the outside metal jacket, causing the jacket to reach the combustion point of surrounding flammable material. For example, it was discovered that the exterior skin of some eight-inch pipe that ran between 16-inch OC ceiling joists became hot enough to ignite the wood joists, resulting in serious fires.

Ten-inch OD steel pipe is expensive, costing about $100 per foot. But, as the price of personal safety cannot be overstated and your insurance company will not cover losses resulting from non-approved eight-inch chimney, it is advisable to use the larger, more costly, approved pipe.

If you still have a wood stove in your home or cottage with an eight-inch stainless steel chimney, you may not be recompensed by your insurer for damages caused by a flue fire. Several years ago, my insurer refused me coverage until I complied with a request to replace my obsolete eight-inch chimney with a 10-inch one. For peace of mind, it is worth making a call to your insurance company to get a clear understanding of their particular chimney requirements.

For efficiency and safety reasons, a wood stove must not be installed with an insulated chimney connected directly to the appliance.

Old masonry chimneys require a flue liner to ensure that sparks do not penetrate cracks in the masonry, starting a fire in a wall or ceiling. For DIYers, the easiest and most affordable type of liner to install is a flexible or rigid stainless steel one. Rigid liners are suitable for straight chimneys; flexible liners are bendable, making them ideal for chimneys with elbows in them.

Rigid or flexible metal liners can be purchased from most fireplace and stove retailers for about $600 to $700 per 25 foot length.

Last word: To keep your chimney clean and safe, use only seasoned firewood with 15 per cent or less moisture content. Burning a hot fire for at least two hours each day will also reduce creosote and soot build up.