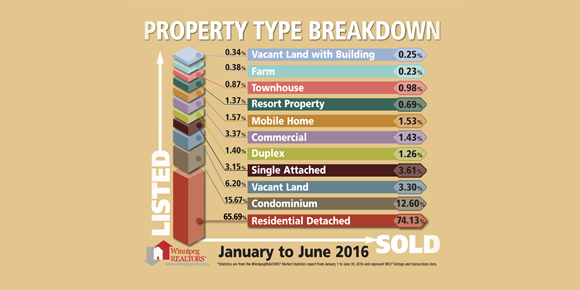 MLS® sales stronger than expected at half-way point this year

In the WinnipegREALTORS® June MLS® market release reference is made to MLS® sales being stronger than expected half way into this year and residential prices are bumping along in a more modest way as predicted due to an ample supply of listings. In comparison, condominium sale prices for the same period last year are actually down very modestly, although they did come up to over $230,000 as a result of higher sale  prices in June.

The national media has been focused on Vancouver and Toronto, due to skyrocketing prices and major price increases being experienced this year, resulting from strong demand outflanking a constrained supply. Both markets are also seeing real strength in their upper-end luxury markets which clearly creates an upward bias in average sales price.

For example, the increase in Vancouver’s average residential-detached sales price this June over June 2015 was 38.5 per cent, which equates to roughly a $435,000 increase in the average sale  price. This dollar amount increase represents 85 per cent of all homes that sold last month in the WinnipegREALTORS® market region. It’s not altogether surprising as our average residential-detached sales price in June was $306,311. Over half of the homes sold for under $300,000, while close to 30 per cent sold between $300,000 and $400,000, and only four homes sold for $1 million or higher.

WinnipegREALTORS® always points out that all markets are local. And there are major differences in how local markets perform across the country.  Just because Vancouver house prices are averaging over $1.5 million in June does not mean Calgary’s or St. John’s are seeing any spikes in their average sale prices.

For those still interested in what is happening across the country and how the Canadian Real Estate Association (CREA) sees Manitoba doing in 2016, the following is from CREA’s June 2016 updated MLS® housing forecast:

Canadian resale housing market trends that defined 2015 have intensified. National sales activity and average prices reached new heights in the first half of 2016 amid a growing supply shortage of single family homes in British Columbia and Ontario, particularly in B.C.’s Lower Mainland as well as in and around the Greater Toronto Area (GTA). Price gains in these regions stand in contrast to declines in provinces where economic and housing market prospects are closely tied to the outlook for the oil patch and other natural resource industries. Elsewhere, home prices are growing modestly, such as in Ottawa or Montreal.

Activity should begin to rebalance away from B.C. and Ontario, as supply shortages put upward pressure on home prices and constrain transactions even as housing demand remains strong in these provinces and interest rates remain low. Accordingly, sales activity over the second half of the year is expected to ease in B.C., Ontario and on a national basis.

Sales in Alberta, Saskatchewan and Newfoundland & Labrador are expected to struggle to regain traction this year, resulting in continuing softness for home prices. In most other provinces, home sales activity and average prices should improve as their economies strengthen and interest rates remain low. Nationally, sales activity is forecast to rise by 6.1 per cent to 536,400 units in 2016. This would represent a new annual record, but remain below the peak reached in 2007 after adjusting for population growth.

British Columbia is forecast to post the largest annual increase in activity (plus 20 per cent) this year, while Alberta is expected the record the largest annual decline in activity (minus 11.5 per cent). Although housing demand remains strong among many housing markets in Ontario, a lack of supply is projected to constrain the increase in sales activity (plus 5.2 per cent) this year. Elsewhere, sales are forecast to rise in Manitoba (plus 7.1 per cent), Quebec (plus 5.1 per cent) and Nova Scotia (plus 5.8 per cent), reflecting anticipated economic improvements in these provinces.

In New Brunswick, strong home sales toward the end of last year and a weak start to 2016 is projected to result in a small annual decline in activity this year despite an anticipated improvement in its economic prospects. In Saskatchewan and Newfoundland & Labrador, where housing market prospects are tied to the outlook for natural resource prices, annual sales activity is forecast to ease by four per cent and one per cent respectively this year.

Prices have continued to push higher in British Columbia and Ontario and sales in these expensive real estate markets have recently hit record highs. Accordingly, CREA’s forecast for the national average price has been revised upward to $490,700 in 2016, representing an annual increase of 10.8 per cent.

The forecast for Alberta’s average price has been revised upward and is now projected to eke out a small gain (plus 0.6 per cent) this year as the province’s supply of listings continues to be drawn down by sales activity. By contrast, average price is expected to ease in Saskatchewan (minus 1.4 per cent) and record a marked decline in Newfoundland & Labrador (minus eight per cent).