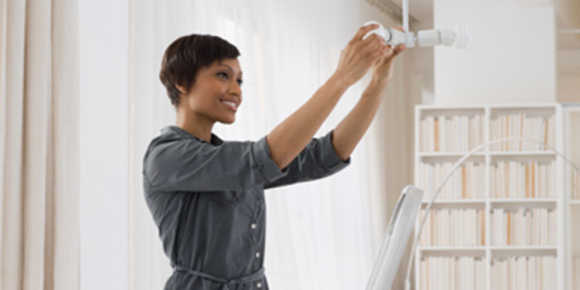 How to change incandescent, halogen and LED bulbs

Changing a standard light bulb or socket can be a simple process if you know the basic rule, counter-clockwise loose and clockwise tight. Most modern fixtures also adhere to this principle; however, there are situations where pot lights and hanging flood lights require special know-how to replace. Let’s start with traditional bulbs and then move on to modern halogen and LED lights.

1. Turn off the wall switch for hanging lamps and unplug table lamps.

2. Most old ceiling lights have a glass globe cover that is removed by loosening three set screws that protrude from the fixture’s base. These should be hand-tightened only and therefore easy to remove.

If the screws cannot be loosened by hand, use a small set of pliers wrapped with masking tape to get them started. (The tape prevents the pliers from marring the screws’ heads.) Back off the screws with one hand and support the globe with the other until it drops free of the fixture.

The bulb will be screwed into a porcelain or other non-conductive base. Grip the base with one hand and twist the bulb counter-clockwise with the other. Replace the bulb with a new one and reattach the cover by hand tightening the three set screws until the globe is firmly in place. (Over tightening can crack it.)

3. Table lamps usually have a shade held in place by a threaded finial. Finials are hand tightened and should be easy to unscrew. If hand power doesn’t work, use pliers with protective masking tape to get the finial started. The lamp shade can then be lifted off the harp (frame holding it in place), exposing the bulb which is screwed into a brass socket with a switch.

If a replacement bulb does not light up when the lamp is plugged in and the switch is on, you may need a new Type A socket/switch (about $6) available at hardware or lumber stores. In this case, take off the old socket by twisting the top section or inserting a flat screwdriver between the seams to separate the top from the base. Unhook the two wires from the top section by loosening the silver and copper coloured screws.

Unscrew the socket’s base from the stud or threaded rod that holds it in place. Take the new base and push the wires through the hole in its bottom. Reattach the base by hand tightening it to the stud. Pull the top part of the socket from its cardboard and brass casing and screw the wires to the appropriate silver and copper contact points. The ends of the wires should be hooked in a clockwise direction so they tighten in the same direction as the screws.

Replace the casing and push it firmly down onto the base to lock it into position. (A little wiggling may be required.) Screw in a new light bulb, plug in the lamp and turn on the switch.

4. Changing outdoor house lamps exposed to the elements can represent a real challenge when the socket and bulb’s threads are corroded.  Before proceeding, turn off the power at the switch and service panel breaker.

In the past, I have broken many bulbs while attempting to loosen them from such a sticky situation.  If the bulb shatters, cutting a potato in half and forcing it over the exposed filament so you can unscrew it safely is a waste of a good spud.

Instead, use needle nose pliers to pry the rim of the broken bulb’s threaded base far enough away from the edge of the fixture’s socket to create a metal tab that can be gripped with vise-grips. Squeeze drops of light electric motor oil between the socket and base. Attach the grips tightly to the metal tab and twist counter clockwise until the bulb socket comes loose.

A new socket can be installed, but the effort is usually not worth your time. Replace your new fixture by reversing the above directions.

5. In my opinion, the most difficult to replace bulbs are GU10 indoor floods or spotlights. These obstinate creatures require downward pressure as well as counter-clockwise twisting to remove. As there is no room between the lights and their glass shades in which to stick your fingers, it is impossible to grasp the bulbs.

I had some success with poster tape (glue on both sides) by sticking it on my fingertips and thumb. This allowed me to grip the bulb’s face, but consumed a lot of fiddling with wads of tape just to remove and replace one bulb. The trick is to purchase a two- to four-inch wide suction cup at a dollar store and stick it firmly to the bulb’s surface. Pressing down on the bulb and turning the cup in a counter-clockwise direction makes removal easy.

Another tip is to replace halogen lamps with LED ones that last much longer and changed less frequently.

A GU10 bulb has two posts protruding from its base. These posts fit into holes in the bottom of the fixture’s socket. Before applying downward pressure to the bulb, make sure the posts are in line with the holes.

6. Pot lights are easy to change unless they are mounted in a cathedral ceiling. In this case, you’ll need a long ladder to get at them. (Never stand on the top rung of any ladder.)The majority of these lights have a finish frame that hides the rough cut hole in drywall or other ceiling material. Grasp the frame with your fingers and with a wiggling motion pull it downward. It should come out with minimum effort.

Attached to the frame is a cylindrical metal canister with spring clasps on the sides that hold the frame in position. With the canister removed, there is room to get your fingers around the bulb to unscrew it.

An A-type MR16 50-watt halogen light is a recommended replacement, but dimmable LED bulbs are also available in this style.

For low-voltage systems, the removal technique is the same, with the exception that the bulb will have posts at the base that must be pulled out of a socket attached to a wire that descends from the fixture. Low-voltage replacement lights are also available as halogens or dimmable LEDs.