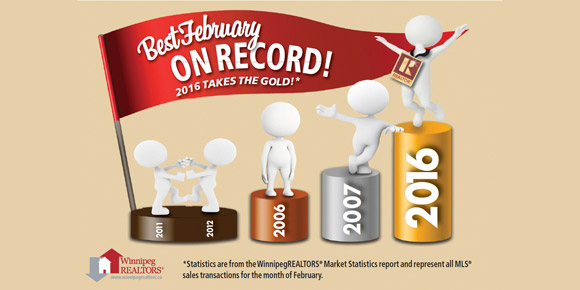 February was a record month, beating best previous high for this month of 797 sales in 2007.

What it shows is that more buyers came out of the woodwork to take advantage of some of the best supply of affordable house prices in the country.

Another February milestone was set this year with dollar volume easily surpassing $200 million for the first time.

New listings coming on to the market were up in the double-digits. However, the stronger conversion of listings to sales kept the overall inventory close to where it was a year ago. Based on the strong sales activity in February and a high influx of new listings, there were roughly four and one-half month’s supply of MLS® listings available going into March. The supply was nearly six months at the end of January.

In percentage terms, February MLS® sales of 816 increased by 21 per cent compared to February 2015. February MLS® dollar volume of $222 million was up 29 per cent over the same month last year.

New listings coming onto the market in February vaulted ahead by 14 per cent, leaving  an inventory of over 3,700 MLS® listings at the end of February, which was only two per cent more than last year at this time.

Given February’s impressive results, year-to-date sales and dollar volume are up 10 per cent and 14 per cent, respectively. Listings entered on the MLS® for the first two months have increased by nearly six per cent.

“Our record-setting February is an indication of the Winnipeg market’s steadfast performance in contrast to some of the adversity we are seeing in other markets across the country,” said Stewart Elston, WinnipegREALTORS® president.  “The Conference Board of Canada is predicting Winnipeg’s economy will outperform most other major Canadian cities this year.”

One noticeable trend, which has emerged in the last few years, is that rural sales are gaining at the expense of the city of Winnipeg. One out of every four MLS® home sales in 2015 were in the outlying rural municipalities. February this year was no exception, as 28 per cent of all home sales happened outside Winnipeg.

“In light of the current City of Winnipeg budget deliberations, whereby Winnipeggers are seeing not only property tax increases, but a proposed 25 per cent increase in their frontage levy, as well as talk of well-beyond inflation jumps in quarterly water and sewer rates and a significant increase in combined building permit fees, it should not be lost on our civic politicians that outlying rural municipalities are an option for buyers seeking lower operating costs for homeownership,” added Elston.

As mentioned in the 2016 forecast for Winnipeg’s MLS® market, balanced market conditions will continue to keep a lid on prices and this was borne out in February. Both the residential-detached and condominium average sale prices were very close to 2015 year-end numbers. The residential-detached average was almost identical at a little over $294,000, while the February average condominium sales price was just below the $236,000 recorded for 2015.

The most active price range also had the lowest average period on market of 30 days. The average number of days on market to sell a home in February was 37 compared to 34 days in 2015.