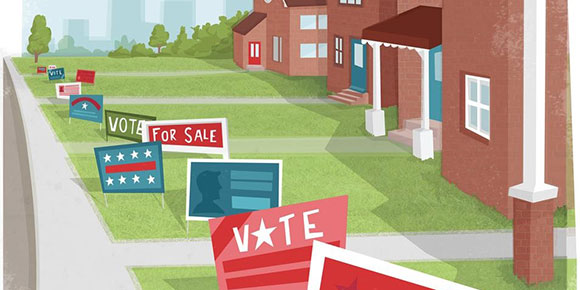 The election and the Home Buyers’ Plan

With just over a week to go in the federal election campaign, it is one too close to call. Much has been said and debated over this long election campaign. What about housing, as Canadians put a lot of stock in being able to own a home and what it can mean to their quality of life?

The Canadian Real Estate Association (CREA) has been keeping track of what the federal parties have been saying about housing and real estate.

One issue CREA brought forward to federal MPs earlier this year was making homeownership affordable via  the Home Buyers’ Plan (HBP), which CREA was instrumental in getting adopted and implemented back in 1992.

Since its inception, the HBP has helped 2.7-million Canadians achieve the dream of homeownership. In doing so, it has created $2.9 billion in spin-off spending and more than 22,000 jobs. The plan allows first-time homebuyers to borrow up to $25,000 from their Registered Retirement Savings Plan (RRSP) to use as a down payment towards their home purchase.

In the case of making homeownership affordable, CREA has been asking the federal government and all federal parties in this election to index the HBP as it has been losing its purchasing power due to inflation and house price increases. CREA is asking the parties to use the Consumer Price Index as a measure for inflation and adjust the HBP incrementally by $2,500 to preserve its purchasing power so that it can continue to help make homeownership affordable for first-time home buyers.

As an important aside, which directly pertains to first-time buyers, the federal government brought in a $750 first-time home buyer tax credit in 2009. It has been embraced by Canadians. In Manitoba, where we have the highest land transfer tax rate in the country, which starts at the lowest property purchase price threshold of $200,000, any relief such as the federal government’s $750 tax credit for first-time buyers is helpful.

In the pursuit of making Manitoba homes more affordable for first-time buyers, the Manitoba Real Estate Association and WinnipegREALTORS® have proposed that the provincial government at least match the federal government’s $750 tax credit to help offset the high land transfer tax incurred by first-time buyers. For a $250,000 home, the land transfer tax is $2,650 and at $300,000 it is $3,650.

So have any of the federal parties in this 2015 election addressed the issue of making homes affordable?

The Conservative Party has made a pledge to allow Canadians to withdraw more from their RRSP to buy their first home.

They will increase the Home Buyers’ Plan (HBP) withdrawal limit from $25,000 to $35,000. So, while not committed to indexing the HBP, the Conservative Party’s pledge for a $10,000 increase is another way of addressing the loss of the HBP’s purchase power over the years since it was brought in. They have also made an election pledge to increase the Canadian homeownership rate to approximately 72.5 per cent. This pledge extends out to 2020 and is calculated to add more than 700,000 new homeowners to Canada’s property rolls.

Leader of the Liberal Party of Canada Justin Trudeau’s campaign promise is to modernize the HBP, if elected, by enabling Canadians impacted by significant life changes to access the program and use money from their Registered Retirement Savings Plans to buy a house without tax penalty.

While the NDP haven’t specifically mentioned the HBP during the election campaign, Leader Tom Mulcair has promised his party, if elected, will build 10,000 affordable housing units, as well as maintain and strengthen social housing.