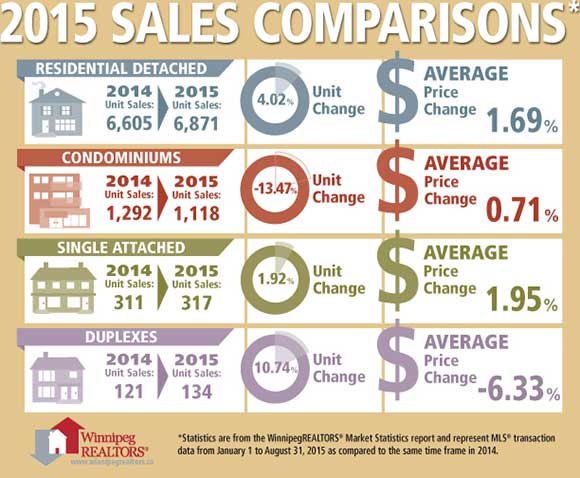 The strong sales performance in August resulted in year-to-date sales being ahead of last year’s pace for the first eight months of 2015. The lead 2014 had slipped away by the end of August due to an 11 per cent increase in sales in August this year.

On the other hand, dollar volume has remained ahead of 2014 throughout the year.  In fact, August set a new dollar volume record for the month.  There were over $340 million in MLS® transactions in August, with one single-family home  fetching $2.1 million. Year-to-date dollar volume is now over $2.5 billion. It is up nearly three per cent over last year.

At 1,258 sales, August 2015 is up there with the best totals for the month. The three higher August month sales on record are moderately better, but none reached the 1,300 level.

As for listings, compared to the last few years, when there was a 25 per cent and 19 per cent increase in MLS® inventory by month-end over the previous year, this year’s 5,600 listings are more restrained. The total is up less than 10 per cent over August 2014 and down nearly 400 listings from last month.

Nevertheless, the healthy supply of listings, which roughly equates to four and one-half months on hand, has not gone unnoticed by buyers wishing to take advantage of historically favourable mortgage rates and some of the more affordable house prices in the country.

“At this point in the year, we are experiencing our fifth best sales year and dollar volume is ranked first and is poised to set a new record by year-end,” said WinnipegREALTORS® president Dave Mackenzie. “We are confident in the stability and consistency of Winnipeg’s real estate market. It really is symptomatic and reflective of a Manitoba economy that is diverse, resilient and performing well.”

“The second point is we still have four months to go and a month like we had in August shows the gap may be narrowed further before year-end,” he added.

The recent release of RBC’s housing affordability index for the 2015 second quarter is helpful in understanding where we stand in a national context.  It shows that buying a Winnipeg detached bungalow — based on the pre-tax income needed to service the costs of owning a home at current market values —  is right in line with Montreal and Ottawa, not far off from Calgary and Edmonton and well below Toronto and Vancouver.

The average days on market for residential-detached sales was 38, a week slower than August 2014.

The highest-priced residential-detached sale was a home in Headingley that sold for $2.1 million. The least expensive sale was for $35,000.

The average days on the market for condominium sales was 55, two weeks slower than August 2014.