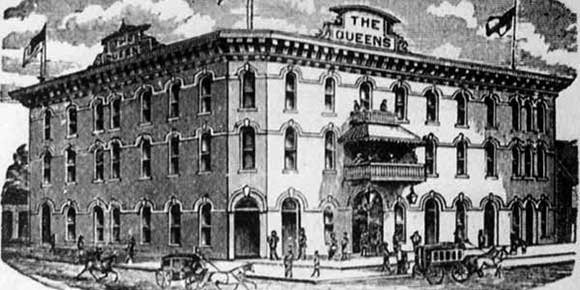 The Manitoba Free Press reporter in his January 22, 1884, article, commented on the need to provide greater assistance to Col. Jim Coolican and the St. Patrick’s Benevolent Society whose relief efforts were hampered by a scarcity of resources.

“Contributions of clothes and food and fuel are urgently needed, and it would be a great help if our charitably disposed ladies and gentlemen would visit these unfortunates ...

“If some of the city fathers would visit these destitute homes, it is not likely that much argument would be required to secure the necessary aid. Whatever is done should be done at once.”

Coolican wasn’t just helping the city’s poor during this time, as he was elected the president of the British American Gold Mining Company. The company raised nearly $500,000 from stock valued at $10 a share. John T. Nagle, an experienced miner, who promised great results from a “well defined fissure vein” that was located “a mile and a half from the railway and about 12 miles from Rat Portage (today’s Kenora),” according to an article in the March 13, 1883, Free Press.

Further information about what became of this company could not be found. But new listings of gold mines and stock offerings were common during this period, although, more often than not,  such companies invariably failed to locate viable gold deposits or were simply a means to swindle gullible investors.

While Coolican may have ruled the auction house with his glib tongue, he wasn’t immune to being the victim of a fraud. The March 3, 1883, Free Press reported the presence of W.J. Coates in the city who’s purpose was to sell insurance to leading local businessmen as an agent of the Marine and Railway Life and Accident Association of Detroit, Michigan. In what was an outright con, association members were to pay a premium and when a member died, a levy of $1 on each $1,000 of insurance held by  other members. Coolican took out a $2,000 premium. A couple of weeks later, a request for an assessment arrived after the death of four members of the association: “$1 per head of the deceased, and $1 for the ‘accident fund,’” which amounted to “$5 on a $1,000 policy, $10 on a $2,000 policy and so on.”

Coolican became suspicious and called an agency about the standing of the association. They knew nothing about the offering and contacted another agency in Detroit and determined that no such association existed.

“People who contemplate remitting their assessments to the Association had better pause ere they do so until they have some more definite idea as to whose pockets the remittances will find their way into,” warned the newspaper.

Apparently, Coolican took his loss in stride and “and he owned up to it with as pleasant a face as possible under the circumstances.”

The Free Press on June 15, 1884, reported that: “Winnipeg said a regretful good-bye to J.S. “Jim” Coolican, real estate auctioneer, who had been the central figure of the recent boom (1881-82), and had in the lean years following the boom organized the city’s first soup kitchen ...”

A lavish dinner was held for Coolican on August 14, 1884, at the Queen’s Hotel, where he was presented with a purse containing $800, “not for its value, for we feel that it is doing very little for one who has spent so much of his time and money, as you have, for the benefit of your adopted city” (Winnipeg Sun, August 14, 1884).

Those who attended the send-off for the real estate auctioneer also praised Coolican for his “many acts of charity during the past very severe winter ...”

Coolican said his reason for leaving for Minneapolis was that there wasn’t much happening “in the real estate line in Winnipeg at present ...”

In Minnesota, he didn’t have much luck, as the mayor of Minneapolis, George A. Pillsbury, had his auction

licence revoked in 1885, although no explanation is provided.

He petitioned the city council to have his $50 fee refunded, but there is no indication that this happened, although the licence of his partner, H.J. Mitchell, which had also been revoked, was reinstated.

After Minneapolis, Coolican, who carried the title colonel from his days in the Canadian militia, eventually made his way to various towns and cities such as Toronto, Victoria, Detroit, Sault Ste. Marie, and Milwaukee — sometimes only briefly, but always in pursuit of the next big score. In Sault Ste. Marie, Michigan, although Coolican was then based in Toronto, he was on the auctioneering stand selling local lots.

The August 5, 1887, Sault Ste. Marie Democrat described Coolican as “a prince of good fellows, and a real estate man without a peer, and we are glad to know that he will soon be back again.”

While American newspapers wrote of Coolican in glowing terms, he gained the wrath of residents of Sault Ste. Marie, Ontario, directly across the St. Marys River from the American community of the same name, by advocating the annexation of the town to the U.S. (St. Paul Pioneer-Press, July 22, 1887). “I am heart and soul for annexation,” said Coolican. “I am tired of seeing our best blood compelled to cross the border to make a living. Look at New York, Chicago, St. Paul or Minneapolis, you see the commercial paths crowded with Canadians winning fortunes and honored names.”

Colonel William Henry Plummer, a Canadian official, replied that if Coolican liked the U.S. so much, “why for God’s sake doesn’t he go there?”

As a result of the Canadian objections, Coolican was forced to smooth over ruffled feelings, although he did so somewhat reluctantly.

Coolican did “go there,” setting up  shop in Chicago. But it was during a visit to Boston in August 1890 that Coolican again became steeped in controversy. In Boston, he became the central figure in a “novel” case involving 16-year-old “Miss Mattie K. Stevens.” When he arrived at the Quincy House (hotel) from Chicago, he passed off the young lass as his niece, and they were given adjoining rooms.

One of the hotel’s guests, a Mrs. S.L. Jenks, a Chicago businesswoman, who knew 45-year-old Coolican, recognized him in the dining room, but not the young girl. She walked over to the table at which Coolican and Stevens were sitting, where Coolican again introduced Stevens as his niece.

Noting that Coolican appeared “somewhat flustered” (Free Press, August 25, 1890), Jenks called upon the wife of one of the hotel’s proprietors.

The initial reaction was to eject the couple from the hotel. Instead, at Jenks’ urging, the matter was taken up by the police.

“I wish to deny most strongly that woman’s charges,” said Coolican. “I tell you there is more behind this than a pretended effort to save a young girl who was never for a moment in danger. That woman Mrs. Jenks has a personal grudge against me and once before in Chicago she tried to do me harm. She did not succeed then and she will not now.”

Stevens said she came to Boston with Coolican at the advice and consent of her mother.

As it turned out, further investigations by the Boston police did uncover that Jenks had a grudge against Coolican over a past business deal. The case was eventually dropped.

“Mr. J.S. Coolican is in Calgary, working up a boom apparently,” reported the September 24, 1890, Free Press. Quoting the Calgary Tribune, the newspaper wrote that Coolican told a Calgary audience: “I have ascertained from the different real estate men here, and am convinced of the fact, that no man has ever made a purchase in Calgary that he has not only been able to take the original purchase money out, but in many cases ten times that amount ... You will see, as I have, investors from the east walking your streets in search of a cheap building to buy, tear down and replace by another, and both they and your people will make money.”

Coolican was actually in Calgary to hold an auction of silverware for the C. & J. Allen company of Toronto.

After years of drifting about the U.S. and Canada, Coolican became a permanent resident of Port Angeles, Washington, U.S.A. (directly south of Victoria, B.C., along Juan de Fuca Strait), where he sold real estate and was the president of the Port Angeles Improvement Co. (equivalent to today’s chamber of commerce). Yet, he still travelled far and wide to attract investors for his various business schemes in Port Angeles, as well as tempt people to settle in the community, as the president of the Callum County, Washington Immigration Association.

In a letter to T.L. Schurmeier, the president of the Northwestern Immigration Association, based in St. Paul, Minnesota, Coolican blamed the high cost of railway traffic hindering his efforts to attract people to the West Coast. He claimed to have placed 100 families in Port Angeles and Callum County, but regarded it as “a poor showing for six months’ work” (St. Paul Globe, June 2, 1896).

Coolican alleged that it took more money to bring people to the west than cross the Atlantic.

“The West has everything to offer the immigrant but cheap transportation,” he lamented. Of course, the railways disagreed as did Schurmeier, who was in direct competition with Coolican when it came to attracting immigrants.

The January 26, 1897, Free Press mentioned that Coolican was in partnership with C.E. Hamilton, an ex-mayor of Winnipeg and ex-attorney-general of Manitoba, in the Pacific and Oriental Investment Company, which had its central office in St. Paul and branch offices in Port Angeles and Kobe, Japan. “The main object of the company is the fostering of Oriental trade with the United States.”

In the summer of 1901, Coolicanorganized the Angeles Brewing & Malting Co. with Chicago investors. On April 8, 1902, Col. Coolican unexpectedly died in Chicago, where just a week prior he had met with St. Louis investors for the purpose of promoting manufacturing enterprises in Port Angeles. At the time of Coolican’s death, the Angeles brewery building was nearing completion, with machinery in Seattle awaiting transport to Port Angeles (Angeles Brewing & Malting Co. (1901-1913) and its successor: Angeles Brewing Co. (1913-1915), according to an article by Gary Flynn.

Coolican also built the $125,000 Hotel Angeles in the community in 1892, which eventually failed.

Coolican was also heavily involved in promoting a rail link to the outside world in Port Angeles in partnership with M.J. Carrigan, the editor of the Port Angeles Leader. Both Coolican and Carrigan travelled east to drum up investments for their railway scheme. It was a scheme that failed as they lacked both investors for a rail line and a solid commitment from a railway.

It wasn’t until the Seattle, Port Angeles & Western Railway Company, a subsidiary company of the Chicago, Milwaukee, St. Paul & Pacific Railroad, was incorporated on January 20, 1915, that a rail link was made to the outside world and that occurred 13 years after Coolican’s death.

Coolican was born in Quebec City in 1851 and married to Annie Coolican, with whom he had three children: John, Arthur, and daughter Bertie.

Coolican’s glory days were during the Winnipeg, Manitoba and Western Canada land boom of 1881-82, when the silver-tongued auctioneer became known to all as the “Marquis of Mud,” for his penchant to sell lots to the unwary where no towns actually existed and the terrain was instead covered by acre after acre of prairie gumbo.