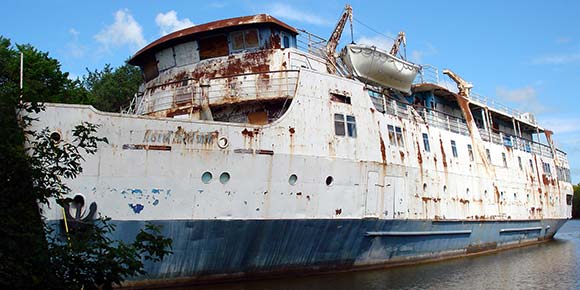 Abandoned to rot from neglect for so many years in the Selkirk Slough, what had once been called the “ship of dreams” is slated to be cut up for salvage. The provincial government and the city of Selkirk are each kicking in $200,000 toward the cost of cutting up the MS Lord Selkirk II, which was once the pride of people living along the shores of Lake Winnipeg and the Red River.

“The people of Selkirk have been working digilently to find a resolution to the problem of this abandoned ship ...,” said Agriculture, Food and Rural Development Minister Ron Kostyshyn. “It’s unfortunate it came to this, but all other avenues have been exhausted and as it sits right now, the ship is not safe and could pose a threat to the environment.”

Selkirk city council has been calling for the disposal of the rusting hulk for over a decade, but it took until this summer for the MS Lord Selkirk II to finally be on a course of being dismantled and removed from sight.

Sasksteel, which won the tender, will soon begin cutting up the ship and transporting the pieces to the Manitoba Rolling Mills for salvage and conversion into new steel products.

“While majestic in its day, the MS Lord Selkirk II is unsafe and unsightly,” said Selkirk Mayor Larry Johannson. “Removing the ship will also remove the threat of environemntal impact on the Selkrik Slough and we look forward to returning the entranceway to Selkirk Park to its formal natural beauty.”

The province will be monitoring the cleanup when the ship is being salvaged.

How did the end of the “grand lady” of the lake arise?

Although all ships eventually succumb to age, the Lord Selkirk had a premature demise as a replacement for an earlier vessel. In 1965, the MS Keenora was retired from service on Lake Winnipeg. The steamboat was built in 1897 for passenger and cargo traffic on Lake of the Woods. In 1915, the vessel was sold to a consortium of Winnipeg lawyers, who had the Keenora dismantled and transported in sections to Winnipeg on railroad flatcars in 1917.

Once reassembled in Winnipeg, she received an extension on her hull, increasing her overall length to 158 feet (41.8 metres). A total of 65 passenger cabins were constructed, and new machinery was installed. The vessel’s route was from Winnipeg to Norway House and points in between. The Keenora’s career ended in the 1960s when she could not meet the new maritime regulations. Like the Lord Selkirk, the vessel was originally destined to be scrapped, but was salvaged to be the major artifact in the Marine Museum of Manitoba’s collection in Selkirk.

Unlike the Keenora, there was never a real plan in place to add the Lord Selkirk to the marine museum’s collection. It was suggested by some, but never acted upon. Instead, the ship was left to the elements in the backwater slough to be used and abused by late-night revellers as a party place. Derelict, an arsonist set the vessel ablaze in 2012. This act resulted in the vessel being condemned and being suitable only for scrap.

With the end of the Keenora on the lake after many decades of useful service, there was a call for its replacement by another ship, which was answered by Dr. Kenneth McKenzie. To build the ship, he and his associates formed Lake Winnipeg Navigation Ltd. and construction of the new vessel commenced in 1967.

“The all-steel, three-deck luxury ship is nearing completion at Selkirk and officials of Lake Winnipeg Navigation Ltd., the proud owners, are completing their plans for the official launching prior to the ship’s first cruise trip,” reported the Free Press on April 19, 1969. “Not since the old SS Keenora was drydocked three years ago has there been an opportunity for Manitobans and visitors to the province to enjoy the lake voyage and the construction of the new ship at Selkirk has been attracting a great deal of attention ...

“The maiden lake voyage for the Lord Selkirk will leave Winnipeg on June 9 for the five-day return trip to Norway House at the northern end of Lake Winnipeg. Ports of call will be at Selkirk, Gimli, Gull Harbour (Hecla Island), Pine Dock, Matheson Island, Grand Rapids and Warren’s Landing on the way up, and at Berens River on the way home.”

The Lord Selkirk was 176 feet long, 41 feet wide and stood 34.5 feet above the water with a draught of 7.5 feet. It was the largest vessel  between the Great Lakes and the Pacific Coast, capable of carrying 160 passengers and crew and many tonnes of much-needed freight for northern communities.

Reporting on a voyage aboard the Lord Selkirk in the July 26, 1969, Free Press, Edward Unrau wrote that: “For most passengers the voyage marked their first venture into Manitoba’s north ... No passenger ever had to go far from the ship to find someone willing to talk. As soon as the Lord Selkirk was sighted the word spread and everyone flocked to the dock ... The entry of the Lord Selkirk into Lake Winnipeg marine commerce is the most exciting thing that has happened on the lake in years.”

But for all its promise of great adventure, the ship was floundering on the rocks of financial ruin from the first day it entered the water. The original construction cost was to be $600,000, but this figure doubled and the owners went heavily into debt just to finish the ship. To keep the company afloat, the Manitoba Development Corporation (MDC), a provincial government agency, invested $600,000, but the vessel continued to lose hundreds of thousands of dollars in its first years of operation. With mounting debt, the MDC was forced to take over ownership of the Lord Selkirk.

Venture Manitoba Tours, which was established by the province to operate the vessel, lost over $1.3 million before it found a buyer in 1978. Harold Einarson, the head of a consortium then known as Sub-Arctic Expeditions Ltd. paid just $250,000 for the ship. Even though the price tag was a bargain, the new company lost $300,000 in its first year of operation. In fact, the accumulation of debt sent the company into receivership in 1983 when the Royal Bank called in a $275,000 loan.

But a month later, Winnipeg businessmen Bill Harris and Jim Gauthier announced they had bought the ship. By 1984, Harris was the sole owner. In turn, he sold the ship to Winnipeg dentist Dr. Joe Slogan. His big plan was to turn the ship into a floating casino, but he needed a licence from the province which never materialized, and so began the Lord Selkirk’s tenure in the slough at Selkirk Park.

A U.S.-based company purchased the ship for scrap, but never got around to breaking up the vessel to the consternation of Selkirk’s mayor and councillors.  United Source International Inc., the boat’s most recent owner, filed for Chapter 11 bankruptcy in the U.S. A plan by the Canadian Coast Guard to break-up the ship for salvage also was abandoned, as no one was found to cover the then $1.5-million cost. But the most recent announcement of 50-50 funding for scrapping the ship assures that the once-proud luxury liner will physically vanish and become the stuff of legend.