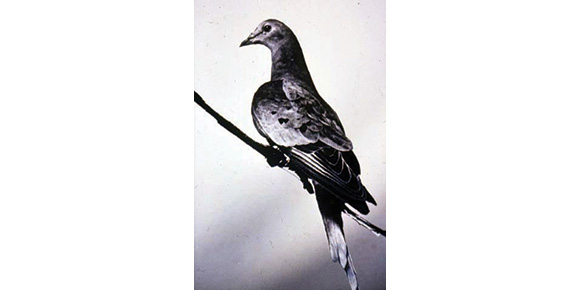 Alfred Campbell Garrioch in his book, First Furrows: A History of the Early Settlement of the Red River Country, including that of Portage la Prairie, wrote that the passing of the passenger pigeon was an “instance of complete and astounding disappearance” of such a formerly numerous bird.

“In those days (the 1860s) those birds used to skirt the woods of this (Portage) district, flight after flight in broken ranks that extended for miles. The numbers that passed some mornings in the course of a single hour, must certainly have reached into the tens of thousand ...”

In his copious hand-written notes, A. W. Schorger, author of The Passenger Pigeon: Its Natural History and Extinction, 1955, recorded that about a dozen passenger pigeon nests were reported in Portage la Prairie in 1885. In the same year, 14 pigeons with full crops were shot at Shell River, while occasional migrating pigeons were spotted at Ossowo, near Poplar Point.

By the later 1880s, only small, isolated flocks were being observed in Manitoba, and following that just the odd bird in the 1890s.

“It can at once be seen that the continued drain on these smaller colonies when other conditions were becoming more difficult for the birds to contend with would be instrumental in depleting the entire former main colonies to a point when netting and shooting and the remnant of these colonies having to run a gauntlet of persecution over their entire course of migration to and from wintering quarters and to such proceeding there could be but one result, and that one we now face, extinction,” wrote Atkinson in 1905.

Of course, by that year, no wild pigeons existed.

From 1909 to 1912, the American Ornithologists Union offered $1,500 to anyone finding a nest or nesting colony of passenger pigeons.

It is now felt by scientists that the communal nature of the birds helped spur them toward extinction, since without large flocks as a stimulus, the presence of so few mating pairs made it too stressful for the pigeons to successfully raise young.

In his pamphlet, Rare Bird Records, George Atkinson wrote that the last specimen he received for illustration was shot by Dan Smith in St. Boniface in the fall of 1893.

The last passenger pigeon to be shot in Manitoba was on April 10, 1898, at Winnipegosis, which was sent to him for mounting. “It was a male specimen in the pink of condition,” said Atkinson.

The last confirmed passenger pigeon hunting victim was “Buttons,” a female, which was shot in Pike County, Ohio, on March 24, 1900, and mounted by an amateur taxidermist, who used two buttons in lieu of glass eyes, hence the name. Almost seven decades later, a man named Press Clay Southworth took responsibility for shooting Buttons when he was a 14-year-old boy.

In 2014, Joel Greenberg uncovered two accounts that claimed the last wild passenger pigeon was shot in Laurel, Indiana, on April 3, 1902. Like Buttons, the bird was stuffed, but the mounted pigeon was long ago destroyed.

Even as the pigeons’ numbers crashed, “there was virtually no effort to save them,” said Greenberg, a research associate with Chicago’s Peggy Notebaert Nature Museum and the Field Museum. “People just slaughtered them more intensely. They killed them until the very end.”

What is remarkable is that people noted the scarcity of birds and even when there was just one or two seen — sometimes the first observed for years in a district — they were promptly shot.

Many people of the era were in a state of denial when it came to acknowledging the irrefutable evidence that the birds were actually extinct. Speculative and completely false rumours arose, some from the mouths of commercial pigeoners who refused to acknowledge their role in the bird’s demise. Some claimed that the entire remaining flocks of passenger pigeons had simply flown off to Australia or South America in response to the hunting pressure and would eventually return. Others alleged that all the remaining birds had drowned in the Great Lakes after being confused by fog, or that the last flock had encountered a severe storm and drowned in the Gulf of Mexico.

Today, scientists have determined that passenger pigeon populations were prone to booms and busts, depending upon the availability of food sources.

In times of busts over the course of its existence, there always remained an effective population that allowed the birds to rebound as the food supply increased. Chih-Ming Hung, a biologist at National Taiwan Normal University in Taipei, and his colleagues, using DNA collected from the toe pads of stuffed birds, concluded that the population of breeding birds was roughly 330,000 on average, falling to as few as 50,000 birds at points in the last million years.

In an online report in the Proceedings of the National Academy of Sciences, Hung said: “If it’s already on this track, human influence can further increase the speed that the population goes down. And once it gets down to some really low level, there’s no way for the birds to recover.”

The passenger pigeon was in the midst of one of its boom periods when Europeans began arriving in North America. The increase into billions of birds was also helped in part by the advance of agriculture that increased the pigeons’ available food supply, even as hardwood forests were being cut down. Although, there also came a point when habitat destruction on an industrial scale by the timber industry and clearing land for agriculture was too much for even the pigeons to handle.

Human intervention ensured that their numbers were so depleted that there wasn’t an effective population surviving, making it impossible for the pigeons to rebound. The passenger pigeon had gone for billions to zero in less than half a century.

“Even though they sometimes fell to far smaller numbers, passenger pigeons survived for hundreds of thousands of years before people started firing guns at them,” wrote Carl Zimmer in his article The Feathered River (National Geographic Magazine, June 16, 2014).

The last known group of passenger pigeons was kept by Professor Charles Otis Whitman at the University of Chicago. All of Whitman’s pigeons were descended from a pair captured in Wisconsin 25 years earlier, he told Atkinson in a 1905 letter.

He told Atkinson that his flock had come to a standstill, having raised no young for four years. “The weakness is due to long inbreeding ... I have tried to secure new stock, but have been unsuccessful. A single pair would enable me to save them, for they breed well in confinement.”

Whitman even tried to breed his pigeons with doves, but the resulting hybrid was sterile.

In 1910, Martha was the only bird of her species remaining in the world and was a melancholy attraction at the Cincinnati Zoo. She died at the zoo on September 1, 1914.

“Newspapers described how Martha was frozen in a 300-pound block of ice and sent by train from Cincinnati to Washington, D.C.,” wrote Jonathan Rosen in the New Yorker article, The Birds: Why the Passenger Pigeon Became Extinct. “There she was skinned, stuffed, and put on display at the Smithsonian for a nation guiltily waking up to its role in the destruction of the bird and its habitat.”

For those wanting to see a passenger pigeon, albeit dead, there are only a few collections of mounted birds in the world, and they are the sparse and silent witnesses of the past multitudes. The Manitoba Museum has five such specimens, including the one mounted by Atkinson — the last known wild passenger pigeon in Manitoba, which was the bird shot in 1898 along the shore of Lake Winnipegosis.

“There will always be pigeons in books and in museums, but these are effigies and images, dead to all hardships and to all delights,” wrote Aldo Leopold, the famous American environmentalist, in 1947. “Book-pigeons cannot dive out of a cloud to make the deer run for cover, nor clap their wings in thunderous applause of mast-laden woods. They know no urge of seasons; they feel no kiss of sun, no lash of wind and weather; they live forever by not living at all.”

In the end, the passenger pigeon’s passing provides a cautionary tale for today: no matter how abundant a species appears to be, it still can be driven to extinction through the misguided actions of humans.