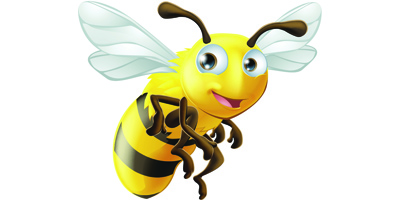 Busy as a bee

English swarms with references to creepy-crawlies of every kind. These references are everywhere — in  out-of-date slang, nursery rhymes, even the Bible. My research unearthed 79 such terms, but dialect and folklore often escape notice, so there are surely more.

The bee’s knees (1920s American slang) referred to something or someone considered “the tops.” Caterpillar (1700) meant a ne’er-do-well, who lived by his wits. By the mid-1700s, caterpillar was a nickname for “soldier.” Caterpillar remains in Australian slang where it signifies “drunkard.”

Everyone knows, “Ladybird, Ladybird,/Fly away home,” although in North America we usually say ladybug. This nursery rhyme appeared in print in 1744.

Ecclesiastes 10:1 tells us, “Dead flies cause the ointment of the apothecary to send forth a stinking savour.” Today, a  fly in the ointment is an obstacle or glitch in one’s plans. Also very old, a bee in one’s bonnet, was first found in print in 1546 and meant, “to be daft; a little crazy.” Today, it means, “an obsession” perhaps with some idea or notion. If Geraldine is antsy (mid-19th century), she’s “nervous; twitchy.” Ants in the pants says roughly the same thing.

Several buggy expressions are actually proverbs. The Italian proverb, You can catch more flies with honey than with vinegar, was Anglicized by 1636. The worm turns evolved from an earlier English proverb: Tread on a worm’s tail and it will turn (1546). The early bird catches the worm is dated to 1636 and, If you lie down with dogs you will get up with fleas is from 1573.

Other sayings are descriptive: He wouldn’t hurt a fly; bug-eyed; knee-high to a grasshopper; cute as a bug’s ear; lively as a cricket; mad as a hornet.

If there are no flies on Henry, he’s both intelligent and cunning. This expression, considered U.S. in origin and dated to 1888, is actually an updated version of an earlier English warning — Don’t let flies stick to your heels (1836).

Originally, a flea in one’s ear (1500s) meant a severe scolding. Today, its meaning is milder — “a warning.”

Quite a few creepy-crawly expressions that we use in English are self-explanatory. No one puzzles over the meaning of bookworm; butterflies in the stomach, or, a can of worms. Other sayings are more obscure, either because they’re ancient and seldom used, or because we aren’t as well-read as our ancestors.

Consider this one: to break a butterfly on a wheel. It means, “to use unnecessary force to achieve a goal.” It was coined in 1735 by English poet, Alexander Pope (1688-1744). Here’s another difficult one: to strain at a gnat and swallow a camel. In wide use in English by 1594, this Biblical quotation decries fretting over small wrongs while accepting big ones (Matthew 23:24).

And what about those birds and bees? This euphemism for sexual behaviour even found its way into popular song. Cole Porter (1892-1964) wrote Let’s Do It, the chorus of which began, “And that’s why birds do it, bees do it/Even educated fleas do it.”

Yes. Bugs and other creeping things are everywhere. There’s no escape. So let’s make a beeline for the coffee pot.