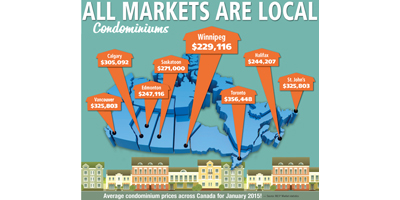 No condo market is the same

When you want to know the temperature in Winnipeg, do you go to Vancouver to find out? Do you take the averages of all the temperatures in major cities and make an assessment of what will happen locally?

Then why would someone take a prediction for national average real estate price increases or decreases and automatically assume it will happen to the same extent in every market. The same can be said about sales. The reality is that not all markets are the same — they all vary due to unique local market conditions.

While not immune to national and global developments, each market has its own local attributes that contribute to influencing prices and activity within the various property types. In Winnipeg, the condominium market only represents 14 per cent of all MLS® property type sales, while in other major cities they represent significantly higher percentage.  For example, Toronto Real Estate Board market analyst Jason Mercer recently told Peter Squire of WinnipegREALTORS® that in Toronto in 2014, 50 per cent, or one in two MLS® sales, were condominiums. Of course, Toronto, similar to Vancouver, draws heavily from investment outside their local market, whereas in Winnipeg the vast majority of condominium sales are local in nature as well as lifestyle related.

On CJOB’s Charles Adler Show last week, this point was driven home by WinnipegREALTORS® past-president David Powell and director Ken Clark. They both have extensive experience in condominium development so they know how markets differ across the country.

The show was precipitated by an article in the Globe and Mail, which focused on a perceived growing surplus of unsold condominium units in Canada’s different markets. Winnipeg was mentioned along with Montreal and Moncton. Herein lies a major problem that arises when you lump in entirely different markets and attach the same evaluation to all of them.

For one, Winnipeg does not have the same degree of first-time buyers active in purchasing condominiums as there are in other major markets such as Montreal. So when the story states tighter mortgage insurance restrictions brought into existence in 2012 have created a “dwindling supply of first-time buyers,” this does not apply to the same extent in Winnipeg.

Clark pointed out on Adler’s show that our local condominium market is far more dominated by empty-nesters and an older demographic than first-time buyers.

In terms of overall build up in inventory as far as MLS® listings goes across the country, when sourcing data from the Canadian Real Estate Association and local real estate boards, Altus Group  created an excellent chart that shows how many months of inventory is available in each Canadian city. It showed that at the end of November 2014, Winnipeg had five months of inventory, which they consider a normal market, while Montreal had 13 months. It is therefore safe to assume that Montreal’s situation is far more acute than Winnipeg’s.

For the record, based on how Altus Group calculates inventory by dividing the number of active listings at month end by the sales, Winnipeg’s condominium inventory supply at the end of November 2014 was 5.7 months ands thus a little bit more accentuated than single-family home supply inventory.

Another point raised by Powell is that the “to be built and/or under construction” category of condominium MLS® listings can make the market appear more oversupplied than it truly is for those buyers seeking out a resale condominium ready to occupy upon sale and an agreed on possession date.

Correctly stated in the Globe and Mail article is that Winnipeg has enjoyed a real uptick in new multi-family construction. Last year was the first time in 30 years that more multi-family units were built in the city than single-family homes.

The point that has to be stressed is that there is not one ubiquitous national market.