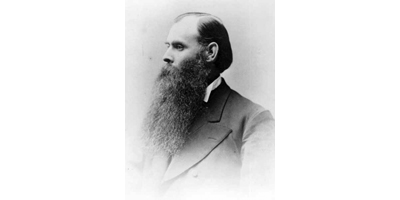 Lord of the con

Some 160 kilometres from Fort Ellice, the pursuers of the bogus Lord Gordon Gordon met up with John Kerr who said he had seen Thomas  Harry Pentland, Gordon’s servant, a day earlier. Throughout the night, Manitoba Provincial Police (MPP) Chief Richard Power and a constable and a guide hurriedly rode to intercept Gordon.

After setting up camp in a clump of willows, Power took up the pursuit alone and on foot at first light on August 30. A short distance away he found his quarry “camped near a train of carts belonging to one Moise Breland, and finding all hands asleep, he quietly announced himself to the astonished gaze of Gordon and his men (Manitoban, September 20, 1873). Gordon quietly gave himself up, as soon as he recognized Mr. Powers (sic), and soon afterward the searchers and searched were on their way back to Winnipeg.”

The Gordon camp was in Saskatchewan’s Touchwood Hills, just to the south of today’s Yellowhead Highway and about 100 kilometres west of the Duck Mountains. At the wanted man’s camp, Power found that Gordon’s party had planned for a lengthy trek as they possessed six horses and five Red River carts laden with flour, pork and other provisions, all of which Power took back with him to Winnipeg. Such bounty gave further credence to the belief that Gordon was headed for British Columbia.

During the dash to capture Gordon, Power rode on horseback over 640 kilometres to the Touchwood Hills and back to Winnipeg.

“Gordon, on his return, was placed in prison and looked like a man hounded to death.”

But unlike the five co-defendants from Minnesota, who had a month before been charged with kidnapping the bogus lord by Manitoba authorities, Gordon was  considered a more sympathetic figure — many still refused to believe the growing evidence of his scandalous past — and as such was granted bail. Freed until his trial began, Gordon took up residence in a Headingley boarding house run by Abigail Corbett where he had been living on and off for two years.

From his base in Headingley, Gordon levelled a series of comic-opera counter charges against Manitoba Attorney-General Henry J. Clarke that were subsequently recanted.

Years later, a November 23, 1878, Manitoba Gazette article dispelled an accusation perpetuated by a court outburst and a letter from Gordon.

When being arraigned in court, Gordon pointed to the Manitoba attorney-general, claiming Clarke “tried to extort from me ten thousand dollars, and because he failed I am locked up here.”

A letter signed by Gordon, which was sent to Manitoba Lieutenant-Governor Alexander Morris demanding that an alleged injustice be addressed, alleged that Clarke had gone to his cell and threatened the prisoner that if he didn’t pay $10,000 he would be handed over to the American authorities. According to the Gazette article, Clarke never met Gordon in his cell, but spoke to the prisoner outside the cell door in the presence of a half dozen policemen who would verify that no money had been demanded by Clarke.

The article also contained a November 20, 1873, letter to Clarke in which Gordon expressed great regret that he had been induced to write the  letter (he blamed others for pushing him to write the letter published in the Nor’Wester), alleging the offer of payment for the attorney-general’s services when prosecuting the five American kidnappers. Such a payment would have been completely illegal as the attorney-general was employed by and could only represent the people of Manitoba (Crown) in the courts.

Gordon wrote that “... I now state that you never directly or indirectly asked or received anything from me for your services in prosecuting Hoy and others for kidnapping, but you simply acted officially in your position as Attorney-General ...”

It was at Headingley that the controversial Gordon affair would eventually be ingloriously resolved. The impostor’s final fate meant he would never have to answer in a Manitoba court or in any other jurisdiction for his misdeeds.

Thomas Smith arrived in Toronto as a representative of Marshall & Sons of Edinburgh, Scotland (some accounts say at the urging of an embittered Jay Gould, the American financier Gordon had conned out of $1 million), the firm that had been swindled during Gordon’s earlier criminal career. Warrants for Gordon’s arrest were obtained in a Toronto police court and given to Alexander Munro, a Toronto police officer. Munro went to Winnipeg with the warrants in the company of a “Mr. Reid” and a “Mr. Hardy.” The latter two men didn’t take part in the subsequent confrontation with Gordon, according to later testimony given by the Toronto police officer at a coroner’s inquest in Headingley.

Munro said he understood Hardy to be a lawyer from New York, but he didn’t know the profession of Reid, “except he was from New York.” In some accounts, the two men are identified as New York detectives. In a February 4 and 11, 1961, two-part series on Gordon in the Free Press, James Warren Chafe  wrote that the two men were private detectives, and that “there is reason to suspect that one was a member of an official American detective service.” He also mentions a Gould representative coming to Winnipeg, but such a man was never referred to during the inquest.

Hardy and Reid did help with the legal proceedings in Winnipeg where the warrants were validated by Justice of the Peace Magistrate Gilbert McMicken.

Munro said he believed Hardy was working on behalf of Marshall & Sons from Edinburgh. Whatever the two men’s role in the Gordon affair, they did not directly participate in Gordon’s arrest nor did they remain long in Winnipeg. According to Munro, Hardy said he would meet him and Gordon in Toronto.

Manitoba lawyer John Farqhuar Bain testified at the inquest that he had been in communication with a lawyer friend in Montréal who asked him to assist Reid and Hardy. The Montréal lawyer said Hardy was seeking advice on obtaining warrants for Gordon’s arrest as well as the whereabouts of the fugitive. It was Bain who advised that the warrants be obtained in Toronto.

Two warrants against Gordon were obtained — one for obtaining goods under false pretenses and the other for bringing stolen goods into Canada.

Bain testified that he first met Hardy and Reid when they came to Winnipeg with a letter of introduction from his Montréal friend.

Munro, along with George McMicken, Bain and James Fullerton, went to Headingley to arrest Gordon. According to testimony given by Munro at the coroner’s inquest, the warrants were presented to Gordon, who “just glanced at it.”

According to an account in the August 3, 1874, Manitoba Free Press, Gordon turned to Pentland and handed him his keys. “You take my keys and everything,” said Gordon to Pentland. Gordon also gave him instructions relating to his private affairs.