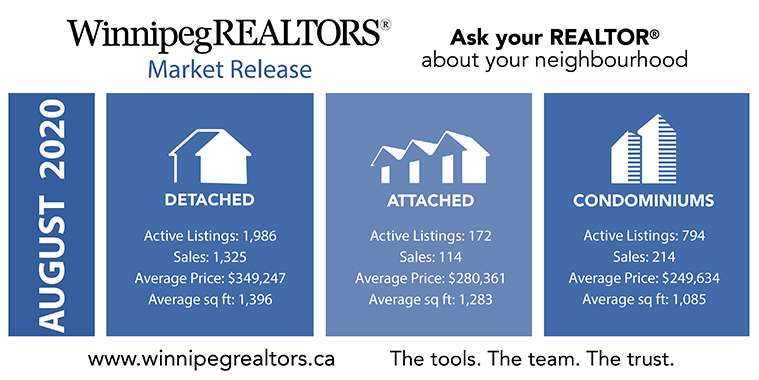 Our local housing market has just experienced it’s third consecutive month of 1,800 plus sales. It couldn’t be more evident that, despite these unprecedented times, Manitobans are a resilient people and still want to venture into homeownership.

In fact, a Probe Research survey of 1,000 Manitobans that the Manitoba Real Estate Association (MREA) and WinnipegREALTORS® conducted in early June showed only one in ten Manitobans (11%) say they are now less likely to purchase a home because of Covid-19, with the vast majority (84%) saying the pandemic has no bearing on their homebuying intentions, and a small number (4%) saying they are more likely to buy a home now. Little did we realize at the time of the survey that the market would rebound in the fashion and v-shape that it has for June, July and August.

A recovery that began in June has since turned into a strong resurgence in MLS® market activity, with August registering 1,845 sales. In fact, sales in August are up 28% over August 2019 and the five-year average for this month.

However, listings have not rebounded with the same vigour. The 2,374 new listings entered on the market in August are down 1% from last August, and dropped 9% in July when compared to the same month in 2019. As a result, that leaves the current inventory of 4,232 listings down 30% from the same time last year. The number of sales in August represents 44% of the current inventory whereas last August it was 24%.

“Following three months of overall heightened sales activity we are not seeing the same response with listings coming on the market,” said Catherine Schellenberg, president of WinnipegREALTORS®. “The impact is a shortage of listings for eager buyers and increased situations where multiple offers and bidding wars are occurring.”

With high turnover of listings to sales this year, especially in the last three months, overall listing inventory shows a tilt in the current market to favour sellers.

The high turnover of listings converting to sales this year, especially in the last three months, is creating a real lack of supply in available listings for buyers at this present time. Most affected are residential-detached properties with only one and one-half months of supply based on the current sales pace. Condos are in a more balanced position at 4 months.

In terms of specific MLS® property type sales activity for the busiest August on record, residential-
detached sales increased nearly 31% while condos edged ahead by 7%. The third most active property type at 98 sales was vacant land — a 66% increase over August 2019.

Similar to July 2020, there were close to one out of three residential-detached listings selling for above list price. Number of sales equated to 67% of the entire inventory and 86% of the new listings entered in August.

The upper end of the residential-detached market was punctuated with the highest sale price ever at $3.9 million. The previous record was set last month at $2.8 million. Not surprisingly, with this move up to more spacious and expensive homes, the average square footage for a home sold in August was just under 1,400 square feet compared to 1,313 square feet in August 2019.

Condominiums were most active in the $150,000 to $199,999 price range with one in four sales, however the next three higher price ranges up to $349,999 all exhibited strong activity with another 44% of total sales. One condo sold for just over $1 million.

“A work from home trend is changing the way one thinks about the kind and extent of space they have, and has definitely garnered more thought and attention,” said Schellenberg. “This, coupled with historically low mortgage rates, are motivating factors for a number of sellers and buyers to make a change during this pandemic.”

“Unprecedented times call for experts who can help you navigate safely and seamlessly through the home buying and selling process,” said Marina R.  James, CEO of WinnipegREALTORS®. “REALTORS® are there to advise you on all aspects of our ever changing real estate market.”