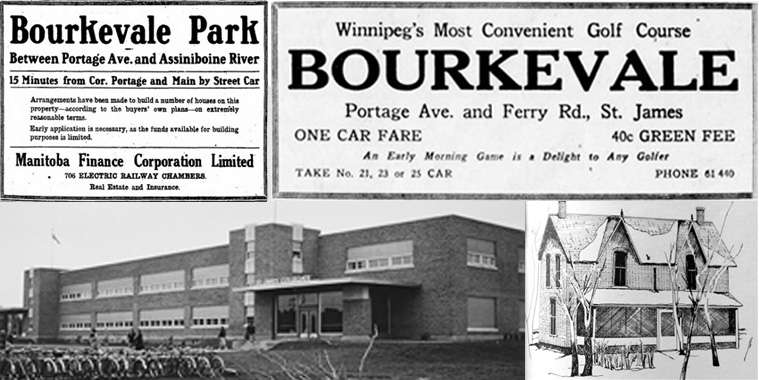 Even in a city as young as Winnipeg it is possible for one piece of land to tell many stories. That is the case with the 1900 block of Portage Avenue, now home to St. James Collegiate.

A written history of the land dates to the 18-teens when it was home to an experimental farm run by the Hudson’s Bay Company called Colony Farm. John Palmer Bourke, an Irishman who came to Manitoba as a Selkirk Settler in 1812, was hired to work there. His job was to procure sheep from the U.S. and bring them back to the farm to raise. Around 1821, Bourke purchased the land from the HBC, built a house and began farming for himself.

The next generation of Bourkes included Edwin Bourke, who was the MLA for St. James through much of the 1870s. He inherited the farm upon the death of his father and in 1882 built a new, two-storey family home called Bourkevale that was the scene of many grand dinners and hunting expeditions.

A third generation of Bourkes saw more value in developing the land than farming it. A portion of it was sold off and starting in 1920 was marketed as a suburb called Bourkevale Park featuring bungalows on fifty-foot lots along streets such as Ferry Road.

In 1924, notices appeared in newspapers seeking an investor to lease the remaining land and turn it into a golf course. The Bourkevale Park Golf Course opened the following spring with Hugh Fletcher as its first manager and golf pro. In later years it was run by William Bourke.

The golf course became property of the municipality in late 1937, likely due to the owing of back taxes. It reopened in spring 1938 with newspaper ads noting that it was now “owned and operated by the city of St. James”. It continued to be a popular course and even made a $3,800 profit for the city in 1946.

Urban development flourished in St. James through the 1940s and there was growing pressure on its city council to do something more substantial with the land.

The St. James School Division issued a warning in 1945 that there was no room left in its schools to take these new children when they reached school age and proposed that the golf course become the home of a new collegiate. This would allow the board to remove high school classes from several area schools and free up space for the younger children.

It took until 1948 for the school board and city council to finally agree on the new use for the site. In a June 15, 1950 referendum, the ratepayers of St. James voted overwhelmingly in favour of allowing the school board to borrow $262,000 towards the estimated $440,000 collegiate development. The rest of the money came from the province.

Architect John N. Semmens was contracted to design the new school. In his 40-year career he was responsible for such landmark buildings as the Bank of Montreal building at Portage and Main, the St. John’s Branch of the Winnipeg Public Library and Daniel McIntyre Collegiate. St. James Collegiate was one of his last commissions.

The cornerstone for the collegiate was laid on February 24, 1951 and the rush was on to complete the 21-room building in time for the next school year. Work fell behind schedule and in September the principal, V. G. Clark, welcomed just 400 students to a partially completed school. Its eight main floor classrooms were ready but only four of the eight upstairs classrooms were finished. A formal opening of St. James Collegiate did not take place until January 14, 1952 after all work was complete.

St. James Collegiate has been expanded several times, including the addition of a west annex in 1954, (also designed by Semmens), a gymnasium in 1958, a vocational wing in 1963 and a new gym in 2001.

While the collegiate was under construction, St. James city council turned its attention to the remainder of the old Bourkevale Park Golf Course land and decided that much of it would be dedicated recreational uses.

The section of land nearest the river became the Bourkevale Community Centre which opened its year-round clubhouse in December 1952. The land that fell between the school and community centre was given to the YMCA. In March 1955, “the Y” opened a single-storey recreation facility that included a gymnasium, kitchen, club rooms and, eventually, a pool. The facility served the community until 1993.

The final piece of the puzzle was the St. James Library which opened in March 1955. The 7,200 square foot building replaced a 500 square foot library located inside the collegiate. The building was expanded in 1963 and a second floor was added in 1970 to bring its present size of 25,351 square feet.

From its humble beginnings as an experimental farm, this one block of Portage Avenue has been reinvented a number of times to serve the residents of St. James.

Christian writes about the history of local buildings on his blog, Winnipeg Downtown Places.