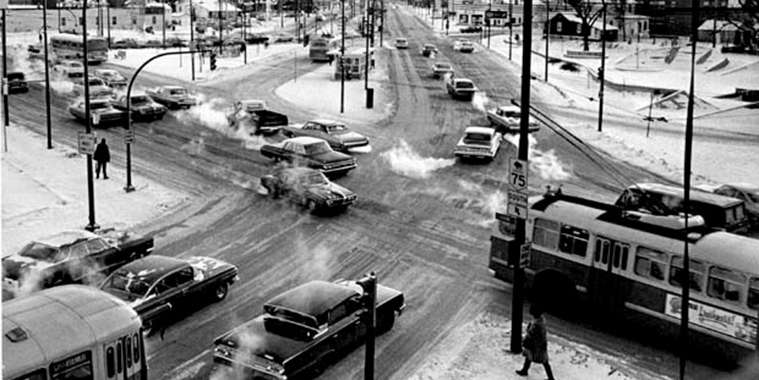 Confusion Corner has confounded motorists for over a century

The Pembina-Corydon Interchange, or “Confusion Corner” as most people call it, was developed in the 1960s but it has been the bane of motorists for over a century.

Early street maps show the root of the problem. Pembina Highway, the main route connecting Winnipeg to the U.S. border since the days of the Red River cart, sliced through the more recently imposed grid street system and ended abruptly at Corydon Avenue. Traffic then had to curve around the circa 1898 Gladstone School to reach Osborne Street.

Complaints about the poorly laid out intersection can be found in newspaper stories as far back as the early 1920s. Addressing the issue, however, would take time, money, and a planning body that crossed municipal jurisdictions as Pembina Highway was in the Rural Municipality of Fort Garry.

In 1949, the Manitoba government created the Metropolitan Planning Commission of Greater Winnipeg. It was made up of representatives from Winnipeg and its surrounding municipalities with a staff of researchers and planners and tasked with recommending solutions to “big picture” problems facing the region such as transportation routes.

The commission favoured a three-pronged approach to solve the Pembina – Corydon – Osborne traffic headache. One was the construction of the Midtown Bridge, which happened in 1954-55, to connect Donald and Osborne streets. This was soon followed by the extension of Pembina Highway to Main Street via River and Mayfair avenues.

The final piece of the puzzle required the demolition of Gladstone School. Planners held off on this phase, partly to let motorists adjust to the traffic changes already made but also to see if a 1955 City of Winnipeg plan for an elevated roadway from the Midtown Bridge to Pembina Highway would materialize.

In 1960, the Metropolitan Corporation of Greater Winnipeg, or “Metro”, was formed. Like the commission, it was tasked with solving regional issues. It differed in that it was an elected body, a second tier of municipal government for the region, and wielded much more power than its predecessor.

Metro was eager to finish work on the Pembina/Corydon intersection. When it became clear that the elevated street plan was not going to happen, it purchased Gladstone School and demolished it once the replacement Gladstone School opened on Gertrude Street in September 1963.

Redesigning the intersection meant widening Pembina Highway. Its north and south bound lanes were split further apart to make way for a “transit island” that would eliminate some curbside bus stops and make it easier for commuters to transfer routes.

Another addition was Pembina Plaza, a park built on the footprint of the former Gladstone School. Designed by E. J. Gaboury Associates, the park was meant to be an urban oasis with trees, a fountain and reflecting pond. It was built two metres below grade so that the sound of traffic would pass overhead and leave the park’s users in peace.

The intersection reopened in stages and was completed in 1966. While the changes may have improved traffic flow, it caused great confusion for motorists.

A 1966 Winnipeg Tribune story took planners to task over the array of traffic signs on display. It noted: “There are 55 signals facing motorists who approach the intersection from any of its seven incoming streets” and added that the myriad of poles and overhead wires for trolley buses made the sensory overload all the worse.

This confusion was reflected in traffic accident statistics. In 1969, Confusion Corner had the greatest number of accidents of any intersection in the Metro area. A decade later, it had fallen to sixth worse. This may have been due to improved signage and / or motorists getting used to the ins and outs of the intersection.

Though planners have made adjustments to the intersection over the past fifty years, Confusion Corner looks much the same as it did back in 1966 with one major exception: Pembina Plaza.

The oasis turned out to be a dud. Before it was completed it had already been nicknamed the “bear pit” by residents and politicians for its resemblance to the animal enclosure at the zoo. Over time, it fell out of use and became a hangout where petty crimes took place.

Residents had long complained that what they really needed was more recreational space. In 1987, they got their wish when the city filled in the “bear pit” and constructed over top of it the River Osborne Community Centre. Only the park’s concrete fin remains.

Who first coined the term “Confusion Corner”? That appears to be a mystery.

A search of the Winnipeg Tribune and Free Press digital archives indicate that the first mention in local papers was made in August 1981. Free Press writer Hope Kamin interviewed local photographer Henry Kalen and joked that when it came to postcards, which Kalen produced, “… tourists wouldn’t be eager for pictures of the inner-city rail yards or Confusion Corner at Pembina, Osborne and
Corydon.”

While that still may be the case, Confusion Corner’s “loop de loop” street sign has been used in the title sequence of the television show Less Than Kind and can be found on a variety of merchandise ranging from t-shirts to Christmas ornaments!