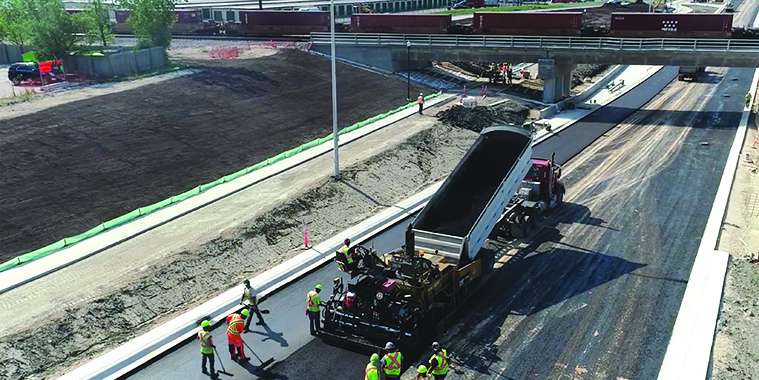 Strategic infrastructure is a vital issue to Canadian’s well-being as we need to be investing in and renewing our infrastructure to ensure our competitiveness as a trading nation and to facilitate moving our goods and resources across the country and to export markets.

A current example of doing what we believe is necessary to invest in infrastructure is commencing construction of the Gordie Howe International Bridge project from Ontario to Michigan in 2018.  As was included in a Statement released by Infrastructure Canada in May this year, “The Windsor-Detroit trade corridor is the busiest Canada-U.S. commercial land border crossing and is vital to the economies of Ontario, Michigan, Canada, and the U.S.  Approximately 7,000 trucks cross the corridor each day, and about 2.5 million trucks each year. This represents one quarter of all Canada-U.S. trade.”

As a major exporting province, Manitoba places similar emphasis on making sure its border crossing at Emerson is functioning well with North Dakota. In fact, the Canada Border Services Agency completed a major upgrade to the Emerson crossing by adding three lanes to accommodate more commercial traffic. It is the Prairies’ busiest border crossing.

Infrastructure involves all three levels of government as it is a public need which has to  be reliable and working effectively if we are to move people, goods and services in a timely fashion. Case in point is the recent opening of the Waverley underpass, with all three levels of government involved. Winnipeg commuters no longer need to endure long delays due to trains. The underpass was completed under budget and ahead of schedule.

Of course road renewal is part in parcel of meeting infrastructure maintenance requirements and this year’s considerable debate on how much budget would be allocated to Winnipeg road repair resonated with many Winnipeggers. They know first-hand the condition of many of our roads is far from ideal and improvements are required.

2019 will go down as one of Winnipeg’s busiest road construction seasons on record. Helping make this possible is the additional boost in federal funding announced this year from gas tax revenues. It amounts to over $40 million with nearly half going towards identified roads in need of repair this year.

So where do REALTORS® see infrastructure investment from both a residential and commercial standpoint? They see both areas as critical. Both new and existing infrastructure need to be prioritized in order of importance as residential has to be addressed to meet a growing population throughout the Winnipeg Metro Region. Similarly, how are we investing in infrastructure, inside and outside Winnipeg, to accommodate new industrial/employment land opportunities (e.g. CentrePort) and efficient distribution access to end-of-delivery destination points?

Now that the Waverley underpass is complete what should be next on our infrastructure priority list that will bring about the most benefits to Winnipeggers and Manitobans?

In the current provincial election there are a number of promises about creating jobs that involve investing in infrastructure and also speaks to the importance all provincial parties place on infrastructure. One local example was the NDP pledge to work with the city of Winnipeg to support the extension of the Chief Peguis Trail from Main Street to Brookside Boulevard. Liberal MP MaryAnn Mihychuk has come out in favour of this project as well. This speaks to how to leverage funding from all three levels of government to make expensive projects such as the Chief Peguis Trail extension possible.

And how do we pay for infrastructure without overburdening Manitobans with some of the highest property taxes in the country?

One way is to make sure we are very strategic and responsible in how we invest in infrastructure so it will be as cost effective as possible and be a stimulus to creating jobs and generating economic output. We need to find innovative ways to provide and finance infrastructure that works well and lasts (e.g. extending life cycle of our investments). As has been mentioned by a consortium of leading business organizations in Manitoba, economic growth through infrastructure investment is the lynchpin of being able to provide adequate funding for public services such as health care education.

Infrastructure drives economic growth and a better quality of life for Manitobans. We need our politicians at all levels of government to find ways to work more collaboratively and in a coordinated approach so tri-governmental agreements in concert with potential private partnerships and funding sources can become reality. Let former Premier Duff Roblin’s unwavering determination and perseverance to build the Winnipeg floodway stand as testimony to what is possible for Manitoba.

REALTORS® are only too happy to market our province to newcomers and our younger skilled and knowledge workers so they will set down roots in Manitoba. However we need to give them a strong value proposition with one of the cornerstones being the provision and upkeep of good infrastructure.